David Tee - AncientPages.com  - Coming from Thyatira, a center of the wool trade at that time, Lydia found a way to make her own money by having a business in dyed purple wool and possibly selling different dyes. The extent of her business is not the focal point here but the fact that she was an intelligent woman who ran her own business is.

We do not get a biographical sketch of her life or family through any historical records the Bible. She appears in the Biblical record as an adult woman who ran her own wool business. Although the Biblical record states that her whole household believed Paul and were baptized, there are no specifics as to what that term refers to.

How many children she had, if she had a husband or if she had lots of employees and servants helping her handle her business affairs is equally not known. What we do know, is that after her conversion and baptism, she opened her home to Paul and Silas.

Whether that was for more meetings or just a place for Paul and Silas to rest is also not known.

Archaeological research has brought the world more information about the city Thyatira than probably its most famous inhabitant. Thyatira (an ancient Greek city in Asia Minor, now the modern Turkish city of Akhisar) was originally founded by Seleucus Nicator at about 27 miles from Sardis.

One of its main industries is, of course, the wool trade. It is possible that through its location its population became very diverse in the first century AD. The chief god of the city was Apollo but there is evidence of the existence of other religious beliefs within and outside the city.

While the current town of Akhisar is located at the same site, there are still lots of archaeological discoveries showing that the ancient town had strong trade guilds overseeing the production and employment of the wool and other products.

Isaiah: Prophet Who Predicted The Coming Of Jesus Christ To Salvage Mankind From Sin

The guilds represented the workers of leather, copper and more. They also had some legal authority. But another more powerful claim to fame is that the church of Thyatira did not remain as strong as it was in Lydia’s time. It received one of the 7 letters the Apostle John wrote in his Book Of Revelation (ch.2, verses 18-29).

Lydia Is Elevated To Sainthood

In several modern denominations, Lydia is elevated to sainthood. The Roman Catholic Church the Episcopal Church, and the different Orthodox denominations all holds feasts in her honor. Even 2 Lutheran churches honor Lydia is a saint. 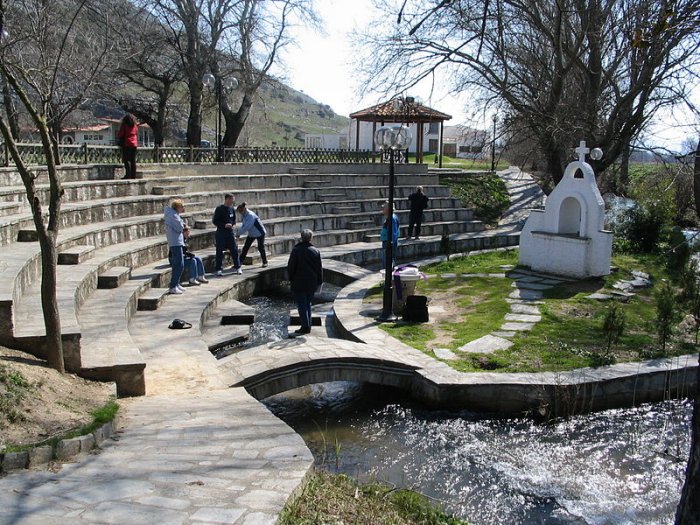 A modern Greek Orthodox outdoor chapel on what is said to be the site where Lydia was baptized. Credit: Ian W. Scott, CC BY-SA 3.0

While there are many churches honoring her as a saint, only the orthodox church places her on the same level as the apostles. They gave her the spiritual title of being equal to the disciples. How they came to this decision is not known.

Her elevation as saint in the other churches is also not clearly recorded. It is possible that it is because she is the first recorded European to become a Christian that makes her eligible for this honor. Depending on the church denomination would depend on the month and day of the year that anyone would celebrate her sainthood and life.

The Bible gives special attention to her profession. The writer of the book of Acts made sure that everyone knew what her occupation was. But that is as far is the Bible goes. Many people who read her occupation also read into her life and business life details that the Bible and history do not give.

This lack of detailed record of her life leave Lydia open to speculation. One scholar held that she must have been a wealthy woman to give a home to Paul and Silas. But the record does not say she gave them a home. How people use her life is often without foundation in the biblical record. .

The last time she is mentioned is when both Paul and Silas were released from prison. Upon their release they went to her house and met with believers.