A. Sutherland - AncientPages.com - The enigmatic moon has always fascinated humanity. Its brilliant presence in the night sky, was the symbol of hope and enlightenment. As often as with the sun, the moon was also associated with birth, death, resurrection and with fertility symbol.

The moon was believed to control water, our dreams and especially its dark side was connected to the occult. 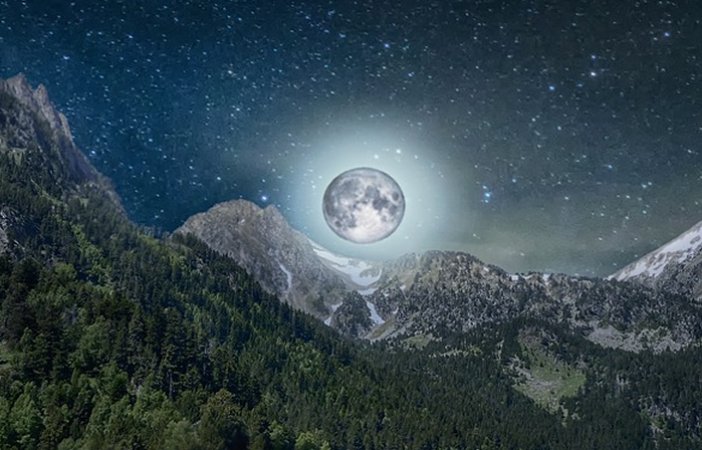 The moon's cyclical migration across the sky and its ever-changing form was in the early societies a powerful symbol of human life cycle. From new moon to full moon, each phase was assigned a special meaning, and similar was with lunar eclipses. In addition to its influence on the tide, the weather and life in general, the moon was also said to control the fate of the people.

It was always believed that the phases of the moon influenced events on earth: not only the flow and ebb of the tides but also blood-letting and haircuts were planned according to the lunar cycle.

Over the world, cultures have developed myths about solar and lunar remarks. Many believed that they were foreclosing natural disasters or the deaths of royalty. In some Asian cultures, it was believed that lunar remarks were caused by demons or dragons that swallowed the moon.

In many ancient cultures, the waxing and waning of the moon, and the inevitable return of the same lunar form, make a striking symbol for philosophers whose theories combined death and rebirth. 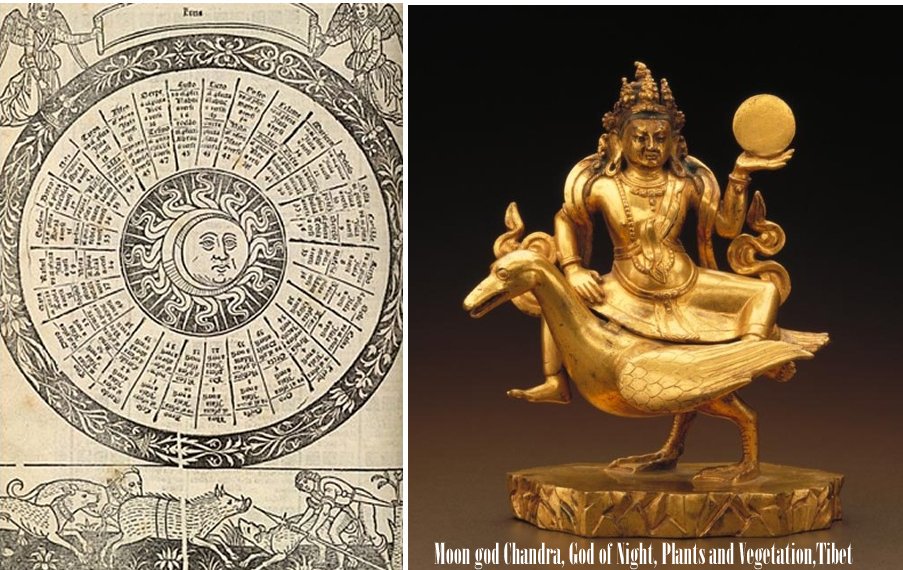 Left: Prediction of fertility with the help of the Moon's phases; Right: Lunar god Chandra, Tibet

The full moon (like the circle) was a symbol of wholeness and strength. Generally, the moon was usually thought of as "female," as the receiver of the sun's light, but also because of the similarity of the lunar month and the menstrual cycle. The Chinese associated it with the yin and the female, too. In their yin-yang system, there is maleness in the moon and femaleness in the sun as well. Thus the moon is female in its waning and male in its waxing.

In Korea, as in China, there is a myth about an archer who shoots down unwanted heavenly bodies (one sun and one moon). Among the Khmer people, there was a belief that the moon - a protector of humans by its dimly lighting up during the night - rides a wonderful silver chariot across the sky each night.

For the Buddhists, the moon represents spiritual strength. The harvest month (full moon near the autumn equinox) symbolizes the fertility of the fields.

The Chumash Indians of the California Coast saw the moon a female god in charge of human health. Among the ancient Egyptians, the Moon was either Thoth, the god of wisdom and writing or Khonsu a healer, protector but also an enigmatic figure with his dark side.

Full Moon In Ancient Myths And Legends Of Our Ancestors

The ancient Greeks had a lunar deity Selene who was associated with the word selas’ which also means ‘light’, and Artemis, goddess of the Moon, and the twin sister of Apollo.

The Maya believed in goddess Ixchel who was associated with the moon, medicine, childbirth, and weaving. Ixchel was the mother of the Bacabs, four brothers who were believed to be the four Atlantean gods – the giants. Among the Mayans, the moon had a powerful influence on terrestrial events. A waxing moon had the attributes of the beautiful, ideal woman, while a waning moon was considered to be an old divine woman who governed over childbirth.

The ancient Aztecs believed that daily movements of the moon and the sun symbolized the struggle. Their moon goddess was Coyolxauhqui, who was also the sister of the Sun god, Huitzilopochtli. It is said that she appeared in the sky when her brother cut off her head and threw it into the sky to form the Moon. 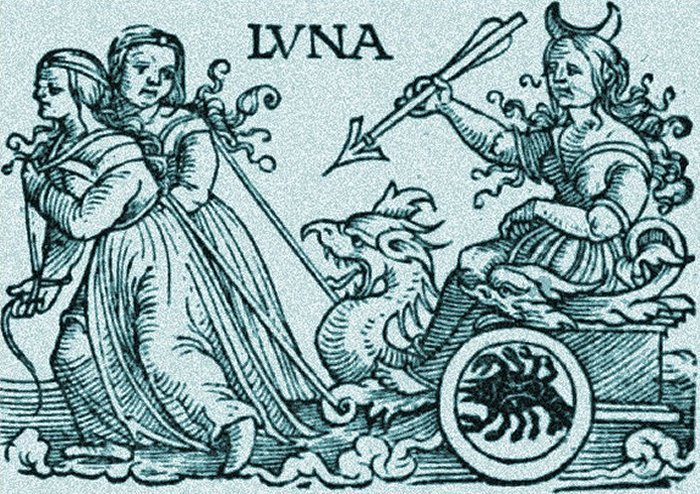 An ancient moon Goddess, the namesake for the Latin word luna meaning 'moon'. Her name also forms the root of the English words 'lunar' and 'lunatic'.

Interestingly, in 1978, a carved, circular Aztec stone, depicting the mythical being Coyolxauhqui dismembered and decapitated, was accidentally discovered in the ruins of the Templo Mayor of Tenochtitlan, now in Mexico City.

In ancient traditions of Peru, the worship of the moon was subordinated to that of the sun, wrote the Inca chronicler and writer, Garcilaso de la Vega (1539-1616). He named the moon "the wife of the sun" and described that walls, inside the lunar temple, were covered with silver "so that their whiteness might immediately proclaim this the chamber of the moon.” The moon was the sister and the wife of the sun as well as the mother of the King and the entire race and thus was called 'Mamaquilla’  (or 'Mother Moon’ - Mama Killa). In Inca mythology, she was the third power and goddess of the moon.

The chronicler also mentioned, there were no sacrifices to the moon like those to the sun. “On either side of the figure representing the moon were the bodies of the deceased queens of the Incas, arranged in order of age and royal succession."