A. Sutherland - AncientPages.com - In Sumerian mythology, Nammu (Namma) was the "primeval sea" - the ultimate origin of all things.

The goddess Nammu gave birth to the heavens, the earth, and life to the first couple of gods.

More exactly, she gave birth to the male sky god An, and the female earth goddess, Ki, whose union, in turn, produced the god Enlil (Air), source of the ordered universe, responsible for cattle, agriculture tools, vegetation, and the arts of civilization. Man was created to serve the gods and provide them with nourishment. 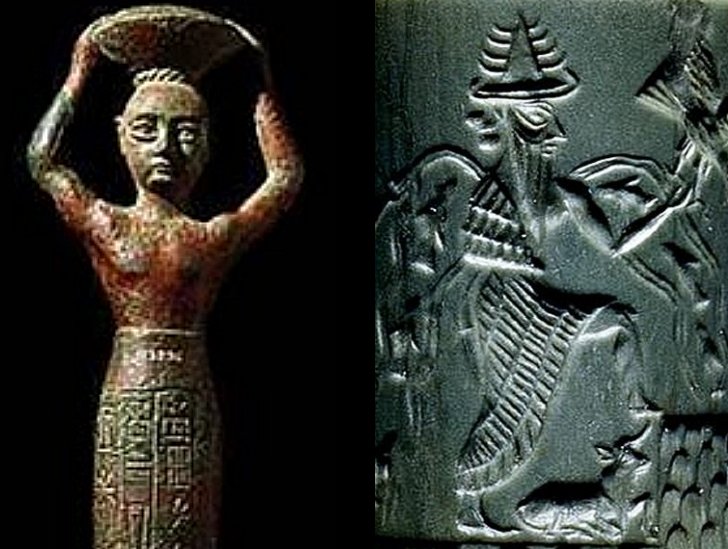 Nammu /Namma), a primeval goddess, who gave birth to An (heaven) and Ki (earth) and the first gods; Right: Enki god of the god of wisdom, creator, protector of humanity and the patron of craftsmen and artisans.

Nammu represented the oldest generation of Mesopotamia’s deities and was the mother of the god Enki (Ea), the Sumerian water god of Eridu, located in the southern wetlands of what is today Iraq. Enki was also the god of wisdom, creator, protector of humanity, and patron of craftsmen and artisans.

Not much is known about the Eridu goddess, Nammu, but she may have been a much more important prehistoric deity in the times before her son Enki took over most of her tasks. Enki’s birth as the son of the goddess Nammu is attested in the Neo-Sumerian mythological text entitled “Enki and Ninmah.” It is said that Nammu got the idea to create mankind in the image of gods; however, to do this, she had to consult her son Enki, who gave his mother instructions on how to fashion man.

Samuel Noah Kramer, Assyriologist and a world-renowned expert in Sumerian history, writes that the poem begins with what may be a description of the difficulties of the gods in procuring their bread, especially after the female deities had come into being.
The gods complain, but Enki, the water god— as the Sumerian god of wisdom who is expected to come to their aid—is lying asleep in the deep and fails to hear them.

In the Sumerian poem of “Enki and Ninmah”, Nammu’s role in Mesopotamian cosmology is particularly emphasized. Still, later, however, in other texts such as the Akkadian ones, Nammu lost her importance being only mentioned, infrequently. In a later myth of Sumer, she became known as Tiamat.

The Mesopotamian scribes depicted and described Nammu as a goddess without a husband, the self-procreating womb of the universe. No male divine deity in connection with Nammu was ever mentioned in ancient Mesopotamian sources. This led to the belief that the first cosmic production was asexual, according to the Sumerian creation myth.

Very little historical information can attest to cult places for the goddess Nammu, representing the oldest generation of Mesopotamian deities.

Her latest reference dates to the Neo-Babylonian period, when king Nabonidus (556 until 539 BC), the last king of Babylonia, mentioned Nammu’s shrine as part of the Esagil, known as the temple constructed to honor Marduk, the protector god of Babylon and located south of the ziggurat Etemenanki.

Leick G. A dictionary of ancient Near Eastern mythology