A. Sutherland - AncientPages.com - The Yoruba peoples of South Western Africa are credited with one of the oldest and finest art traditions in Africa. In history of Ife art in Africa, there are many exquisite pieces of work and one of them is the “Ife Head”. The artifact is undoubtedly a great work of art.

The head, which was created using the lost wax technique, is one of thirteen brass heads, all discovered at the same site.

The Importance Of The Head In Yoruba Sculpture

Like many other African peoples, the Yoruba of western Nigeria, the Yoruba people regard the head (“ori”) as the seat of divine power of the Supreme Being. In the person’s life, the head is the life source and a vital instrument controlling destiny and personality. The Yoruba people particularly, highlighted the head as the crown of the body and the place where the soul dwells.

It is a human head that decides about one’s identity, communication and perception.

Therefore, in the Yoruba’s art, the head is the most elaborately formed part of Yoruba figure sculpture.

As it agrees with the tradition, it is perhaps not surprising that nearly all of the Ife metal sculptures that we know – and there are only about thirty – are heads. But when finally, a full figure was discovered at Ife, the head was just about a quarter of the body, as it usually is with the typical proportion characterizing much of African art.

Use Of The Head Is Unknown

The identification of the Ife Head (a little smaller than life-size) remains uncertain, but it is dated to 1400– 1500 AD and the head is African and a royal figure. Its elaborate beaded headdress, maybe a representation of a crown associated with an Ooni, a ruler of Ife. 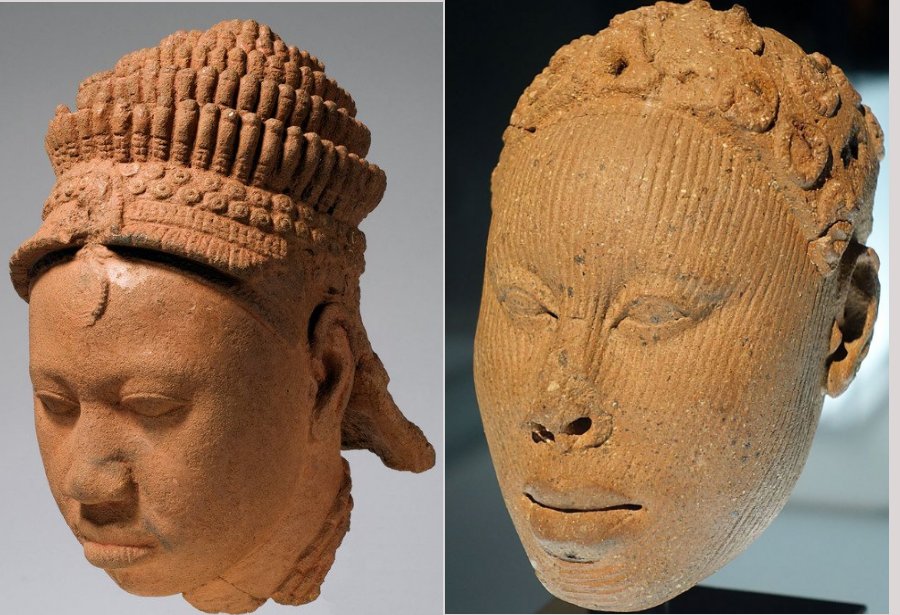 As the head could not stand on its own, it might have been attached to a wooden body. It has been suggested that the artifact might have been used in ceremonies and/or in processions during the absence of the ruler or because he was already dead.

The Ife Head Associated With Legendary Homeland Of The Yoruba

The oral traditions of the Yoruba people, say that Ife was the place where both civilization and its life, began. Ife is the legendary homeland of the Yoruba peoples and its sacred ruler, the Ooni. This sacred figure is still worshiped among the Yoruba as the descendant of the original creator gods.

Ife is located in Osun State in modern south-western Nigeria. It started as a a city-state in the late first millennium, around 800 AD and flourished as a leading political, economic and spiritual center between 1100 and 1400.

Mystery Of The Lydenburg Heads

Shaka Zulu: African Hero And One Of Greatest Military Leaders Of All Time

The city of Ife where the metal heads come from, was once called "Black Athens". Ife was and remains the main center of their traditional worship, which resulted from the Yoruba mythology. It was also one of the major city-states of the former Yoruba state.

The art of Ife contains a large number of sculptures in brass, copper, terracotta, and stone, and all of them were discovered at different sites in the city. When the Ife sculptures first presented to the western world, they were compared with the classical art traditions of ancient Rome and Greece.

It was even theorized that such the Ife heads were evidence that Ife was once the site of the lost civilization of Atlantis.

The Yoruba believe that when the Supreme Being wants to create a human being he asks one of his lesser deities to mold the physical body from divine clay. One the molding is finished, the creator breathes life into it through the head.

Thus he makes a living human being that is directed to another deity that is responsible for creating of the inner heads.

Although all the inner heads look alike, each of them is basically different from the others. The inner head chosen by a newly created human being, automatically determines, the person’s destiny on earth.

The person who has chosen a good inner head will be lucky and prosperous in life; another person who is always unlucky in life is considered to possess a bad inner head.

But the problem is that the bad inner head can never be altered, which is confirmed by the Yoruba saying: