Ellen Lloyd - AncientPages.com - Can the nearly 7,000-year-old Gradeshnitsa Tablets offer evidence of one of the world’s oldest human writing? Are the carved signs and symbols on the tablets merely decorations or an unknown ancient language?

Those who examined the Gradeshnitsa tablets conclude the engravings are identical to the hieroglyphic script found on ancient Egyptian tablets and pyramid texts. 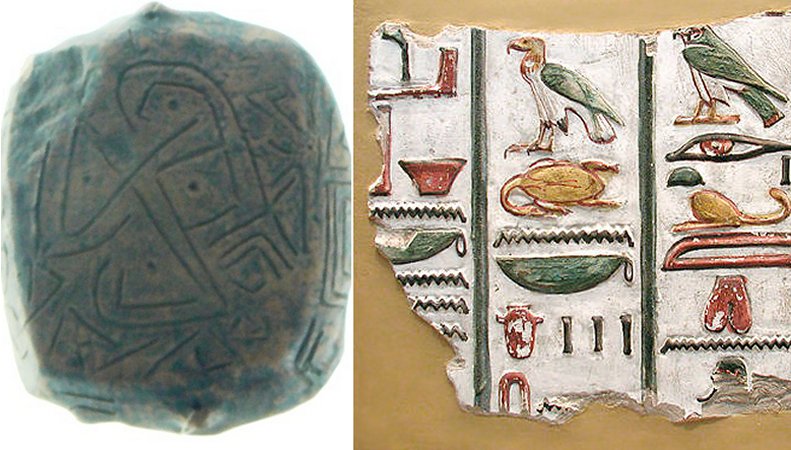 Left: A copy of the backside of the Gradeshnitsa tablet, exhibited in the Vratsa History Museum. Credit: Vassia Atanassova - Spiritia - Right: Hieroglyphs from the tomb of Seti I. Credit: Jon Bodsworth, Public Domain

The most controversial theory suggests the Gradeshnitsa tablets from Old Europe pre-date Egyptian hieroglyphs by at least two millennia! Did ancient Egyptian inherit the knowledge of hieroglyphs from ancient European civilizations?

Similarities Between The Gradeshnitsa tablets And Tartaria Tablets

The Gradeshnitsa tablets, dated to around 5,000 B.C. were unearthed in 1969 near the village of Gradeshnitsa in the Vratsa Province of north-western Bulgaria. The inscribed tablets are striking similar to the signs found on the controversial Tartaria tablets.

As discussed previously on Ancient Pages, the Tartaria tablets discovered in Romania are “covered with pictographic writing are extraordinary because they raise the possibility that writing in the Danube basin predated the earliest Sumerian cuneiform and Egyptian hieroglyphics.”’

Was a very similar language used by ancient people who lived in Bulgaria at the same time?

Some 7,000 years ago, the sophisticated Chalcolithic civilization of Southeast Europe left a legacy that is largely forgotten today. Though they lived a nomadic lifestyle, these people possessed good knowledge of metallurgical technology and they left behind some remarkable ancient artifacts offering evidence of their skills.

According to scientists, the Chalcolithic civilization of Southeast Europe was connected with people living in other parts of the continent and the rest of the Old World. Studies of different kinds of pottery scattered throughout the region, reveal extensive trading and interacting between these ancient people.

The unified Chalcolithic cultures can be traced go back to the beginning of the Neolithic. The civilization was divided into various centers and people built small villages and settlements.

In time the cultures expanded, and their settlements grew in size and number. The mysterious Vinca culture that is today famous for creating outstanding figurines and script scholars still struggle to decipher flourished from about 6000 BC to 3000 B.C on the banks of the Danube river.

The Vinca was by no means a primitive ancient culture. Some of the largest Vinca sites in the 5th millennium were larger than most Minoan and Mycenaean sites!

Did Ancient Egyptians inherit Knowledge Of The Hieroglyphs From Old Europe?

Excavations at ancient sites have provided us with historical information about the interesting Chalcolithic civilization of Southeast Europe. Near Provadiya and Varna in Northeast Bulgaria, we can find Provadiya – Solnitsata (“The Salt Pit") Settlement Mound. This salt pit mound appears to have been Europe’s oldest town. Putting their settlements and daily life aside, the most fascinating aspect of these cultures revolves around their languages and scripts.

Little is known about the Gradeshnitsa tablets currently preserved in the Vratsa Archeological Museum of Bulgaria and scholars cannot determine if they offer evidence of old writing or not. 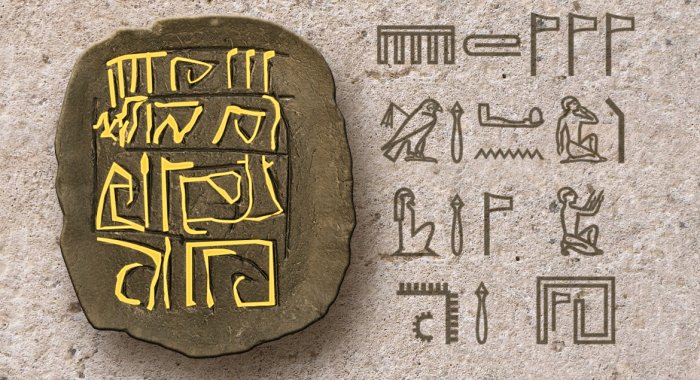 Is it possible the script on the Gradeshnitsa tablets is older than the Egyptian Hieroglyphs? Credit: The Institute of Transcendent Science

Steven Roger Fischer, former director of the Institute of Polynesian Languages and Literatures in Auckland, New Zealand do not think the Gradeshnitsa tablets can be regarded as proof of written words. According to Fisher, “the current opinion is that these earliest Balkan symbols appear to comprise a decorative or emblematic inventory with no immediate relation to articulate speech.”

The Institute of Transcendent Science states “the Script used in the engravings upon the Tablet of Gradeshnitsa, found in the land of Ancient Thrace (present-day Bulgaria) and the Scripts used in similar tablets and in the pyramid texts, found in Ancient Egypt, represent one and the same IDENTICAL Hieroglyphic Script!”

This has led to scholars to speculate that ancient Egyptians may not have been the first to use the hieroglyphs. This finding suggests that hieroglyphic script originated from ancient Thracians, present-day Bulgaria. This writing knowledge could have simply been transferred and introduced in ancient Egypt.

Ancient Pages wrote earlier that “more and more evidence confirms a very brave thesis, that it is the Balkan Peninsula, rather than ancient Mesopotamia that is the cradle of our civilization.

The evidence of a little-known culture preceding Egyptian and even Sumerian culture has been attracting the attention of researchers, turning everything we know about antiquity upside down.”

What if the cradle of civilization should be sought in Old Europe and not Mesopotamia?

The Institute of Transcendent Science