A. Sutherland - AncientPages.com - India has been widely known for its iron and steel since ancient times. The Delhi Iron Pillar is a marvelous example of India's skilled metallurgists.

A column of cast iron 23 feet (7 meters) high, weighing approximately 6 tons with a diameter of 16.4 inches stands in the courtyard of Kutb Minar in Delhi, India. It's famous for the rust-resistant composition of the metals used in its construction.

The column – made up of 98% wrought iron of impure quality – not in any way welded together – seems to have been forged as a single, gigantic piece of iron. It is believed that the top of the column originally supported a figure of Garuda – “Messenger of the Gods”.

There are numerous early literary references to steel from India from Mediterranean sources including one from the time of Alexander (3rd c. BC.)

People of ancient India produced iron capable of withstanding corrosion, most likely due to the high phosphorus content of the iron produced during those times.

A few years ago, archaeologists found several artifacts, including small knives and blades besides earthen pots dating back to roughly 2,200 BC.  These findings clearly attest to India's ancient achievements in the field of metallurgy and pushback Iron Age in India. C14carbon studies performed by the metallurgists have shown that there were many ancient mines from which silver, copper, tin, zinc and lead were produced.

There were many sites especially in Rajasthan associated with metallurgy and dated back to 1300 BC.
Mining was well known to the ancient Indians.

As to Telangana, the Iron Age may have come into existence in much before the rest of the world. Telangana - a state situated on the Deccan Plateau, in southern India - has a long tradition of metallurgy.

The metal objects, dated to the period between 1800 BC and 2,400 BC were carefully tested at the National Geophysical Research Institute (NGRI) using a method called Optically Simulated Luminescence (OSL). It has been determined they were produced during 2200 BC.

Officially, the beginnings of the Iron Age around the world date to 1200 BC, however, the Iron Age in India clearly goes back to 2200 BC.

The iron discoveries attest to much earlier skills in metallurgy in India. The ancient craftsmen had good knowledge about wielding weapons made of metals. It is estimated that the only metal that was molded was copper, but due to its scarce nature, it was not a feasible option.

Iron ore smelting and processing, steel production and the world of smiths were developed.
There were large quantities of iron ore deposits in the Telangana region. Today it is difficult to say exactly when the Telangana iron ore production has begun. However, it is evidence of iron implements discovered in the Megalithic burials in the region. 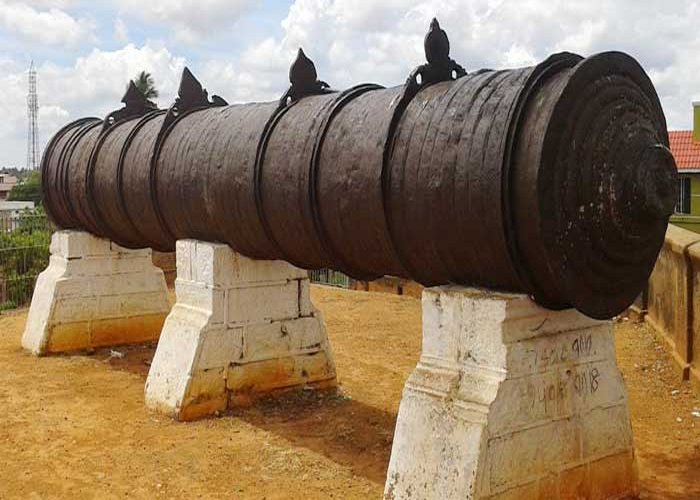 The 26-foot-long cannon (image above) has a weight of 22 tonnes. It is forge-welded and has not been made by casting. The nearly 400-year-old cannon, though exposed to sun and rain, have not rusted. The outer circle is 300 mm in diameter, while the inner circle is 150 mm in diameter. Inside, it is made using 43 long iron plates and the outer of 94 iron rings. Image source

A number of medieval travelers reported that there was an abundance of high quality iron ore mines, especially in northern Telangana.

Unfortunately, today most of the iron-smelting knowledge is lost in time.  There is also the absence of written records or remains of the ancient smithy shop, the exact technique, and tools used in the production of some of the heaviest and most impressive iron forgings, like for example, Delhi's iron pillar.

Left: Generations' long Docra craft tradition - has the amazing feature that the pieces are crafted out of a single piece of metal and have no joints. Right: Wootz steel was highly prized across several regions of the world over nearly two millennia and one typical product made of this Indian steel came to be known as the Damascus swords. A splendid example is the sword of Tipu Sultan.

"There is still much iron ore available on the surface of the earth and every village is attache with one or two hillocks containing huge quantities of iron ore. But at present, it is not known to the people... even blacksmiths who are in the villages do not know anything about the smelting of iron. People used to collect, the iron ore, in the shape of stones, granules and sand only on the surface but they didn't dig the mines as mentioned by the travelers..." (S. Jaikishan)

Most of the Telangana villages have their names associated with iron, ironsmiths and iron furnaces.
In Tely (a Dravidian language spoken in the Indian states of Andhra Pradesh, Telangana), the word
"Imunu" means iron, "Chityamu" means slag or scum of melted metal. "Kammari" means blacksmith and "Kolimi" means furnace.