A. Sutherland - AncientPages.com - The winged sun disk has been found in many cultures worldwide from very ancient times. As one of the oldest religious and solar symbols, the winged sun disk was seen in many variations among the Sumerians, the Assyrians, and the Hittites, just to name a few.

The winged Sun signifies omnipresence; it is associated with divinity, royalty, and supreme power in Egypt, Mesopotamia, Anatolia, and Persia. It is interpreted as a solar globe usually carried on the hawk wings of the God Horus, surmounted by the spreading horns of the ram god Amun. 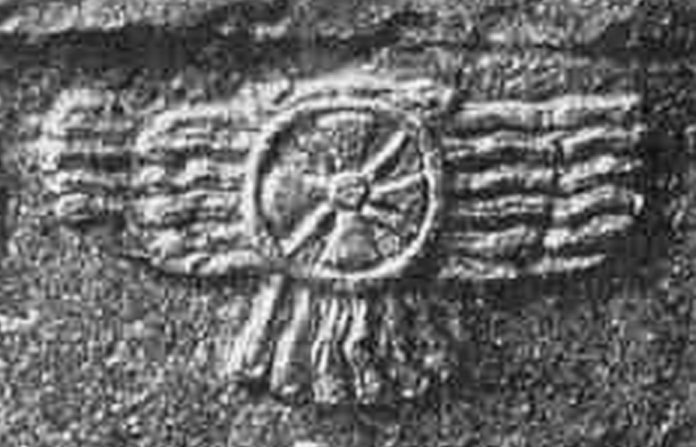 Another variation is the sun disk, flanked by two uraeus snakes (cobras) with opened hoods, sometimes wearing crowns on their heads.

The winged disk represents a singular symbol of the Savior, a winged sun, the Sun of Righteousness, arising with healing on his wings.

It is also a symbol of the sun god - Ra. 'Ra' means transforming good into nothing, disaster, and suffering in Hebrew. In China, it is a symbol of heavenly perfection, and in India and Egypt, it symbolizes a metaphorical rise in higher spheres.

In the occult, it has become a symbol of power. It is often used on tarot cards.

Winged Sun Disk In Ancient Egypt, Mesopotamia And The Levant

In ancient Egypt, the symbol is attested from the Old Kingdom (c. 2613-2181 BC) and usually flanked (on either side with a uraeus. As a symbol of protection, it has been found on stela and above temple entrances since the Middle Kingdom. It was called 'the Behdety' and as such, it was associated with the God Behdety, who (after being combined with Horus) became known as Horus of Behdet -  as hawk-winged sun disc originating in the Nile Delta. 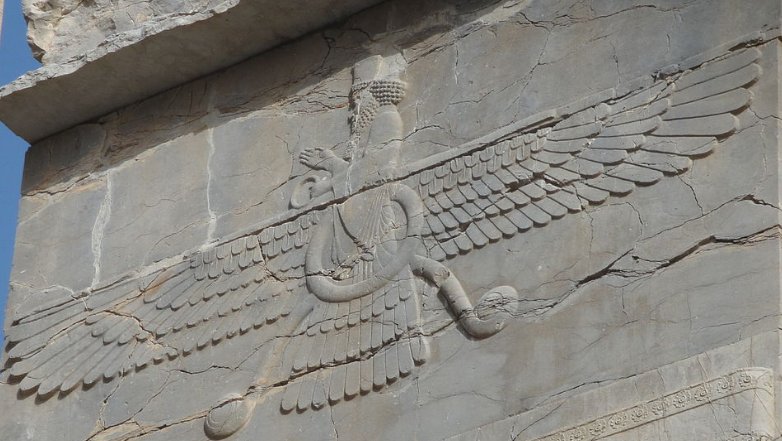 Farvahar (the "visual aspect of Ahura Mazda") i Persepolis, during the times of  Zoroastrian Persia. Source

The pharaoh Akhenaten tried to eliminate all other deities and introduce the worship of the sun disk alone, personified, naturally, by himself. His attempts failed. Ancient Egypt's polytheistic system of beliefs did not accept Akhenaten's ideas and visions and erased his name from stelae.

The sun disk became the main symbol of the chief heaven god, known and worshiped under several names in Egypt. Traditionally, the sun disc was carved over doorways on many Egyptian tombs and temples.

In the Levant, Mesopotamia, and Asia Minor, the winged sun disk appeared about 2000 BC.

Assyrian rulers considered it a symbol of royalty. Its importance was expressed in words: SOL SUUS (in Latin, literally, "his own self, the Sun", i.e., "His Majesty").

In the 8th century BC, the winged solar disk appeared on Hebrew seals associated with the royal house of the Kingdom of Judah, especially the symbol (together with the inscription l'melekh ("belonging to the king") was found on jars and seals from the reign of Hezekiah (715 to about 686 BC), the 13th successor of David as king of Judah at Jerusalem. Hezekiah's royal seals were decorated with six rays emanating from the central sun disk and two downward-pointing wings.

In Zoroastrianism, the winged sun disk was known as 'The Faravahar' (the "visual aspect of Ahura Mazda") during the times of  Zoroastrian Persia, and some seals were found flanked on either side with the Egyptian ankh ("key of life") symbol.