A. Sutherland - AncientPages.com - In the mythology of the Irish people, Mag Mell was a mythical, paradise-like realm with everlasting spring and sunshine. It was a place where all the trees were always full of magical fruit, flowers and vats of divine mead that could never be emptied. 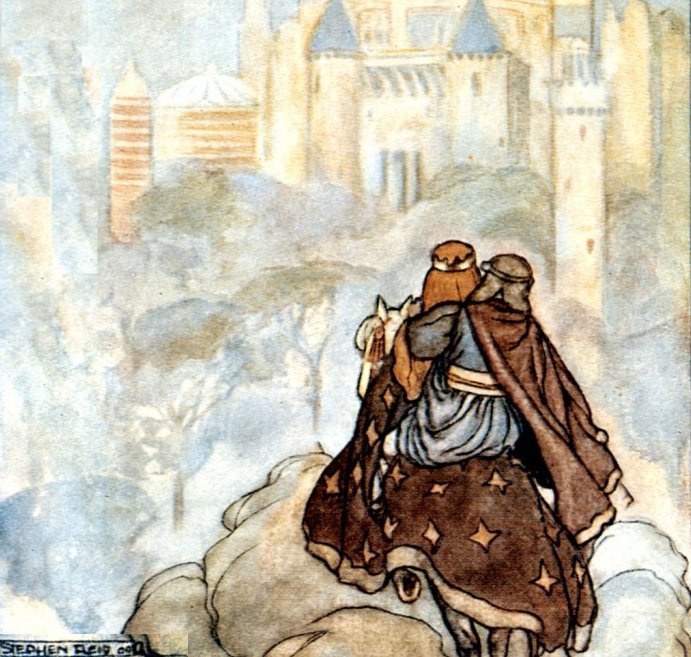 The fairy Otherworld; a beautiful land of everlasting spring and sunshine, the Land of Youth (Tir na n-Og) or Mag Mell. Illustration by Stephen Reid in T. W. Rolleston's The High Deeds of Finn (1910) via Wikipedia

In Mag Mell lived gods accompanied by immortal heroes who were able to reach this place through death and glory.

All of them enjoyed endless happiness and harmony. Neither disease nor death or any other discomforts were known to them.

Mag Mell reminds us of god Odin’s Valhalla, the hall of the fallen Viking Warriors. Valhalla was the Viking warriors’ dream destination and Mag Mell was reserved for the Celtic heroes who died honorably.

In several Irish tales, Mag Mell was the Otherworld in the form of a floating island and the realm of the sea god Manannan Mac Lir. According to the Irish “Book of Invasions”, a sea god and king of the Fomorians, Tethra became a ruler of Mag Mell, after his death in the first battle of Mag Tuired, when the Tuatha De Danann took Ireland from the Fir Bolg, one of the four groups, who then inhabited the island.

Tradition has it that this ancient sea god never lived on land but made his home somewhere in the ocean, on an island with different names:  Mag Mell (“plain of honey” or “the plain of delights”) or sometimes Emain Ablach (“island of apples”) and Tir Tairngiri (“land of promise”).

The ancient Irish imagined Mag Mell to be located in the south or south-west of Ireland or beneath the ocean. It was also considered a possible refuge for the Tuatha De Danann.

Mag Mell Is Unlike The Underworld In Other Mythologies

Mag Mell was accessible only to those who really deserved it. It was not a place similar to other realms of the dead like Hel’s dark dwelling place for the dead in Norse myths or a gloomy abode of Yama, the god of the underworld, who rules the hell and judges the dead, in Hindu texts.

This supernatural Celtic realm of everlasting youth, beauty, health, abundance, and joy, was never associated with a typical afterlife destination.

Mag Mell was believed to be an earthly paradise, accessible to divine beings and some earthly visitors, who became the chosen ones such as Cuchulainn or Tethra, Fionn mac Cumhaill, and others.

According to ancient Irish beliefs, times passes much slower in the Otherworld. As previously discussed on Ancient Pages, the Celtic Tree of Life served as a portal to invisible worlds and a source to sacred knowledge, guarded by the most enlightened ones.

This could explain why ancient Celts believed there were gateways leading from the material into the spiritual world, and why times passed slower in this mysterious realm, invisible to the naked eye. The nature and reality of the Celtic Otherworld sound almost like the modern concept of parallel universes.

MacKillop J. Myths and Legends of the Celts