Ellen Lloyd -  AncientPages.com - The Jade Emperor is very important and powerful being in Chinese mythology. Known under many different names, the Jade Emperor was the ruler of Heaven and official patron deity of the Chinese imperial family.

Not to be confused with Buddha, stories about the Jade Emperor are not limited to Chinese mythology. In Korean mythology, the Jade Emperor appears as the mighty sky god Haneullim, and in In Buddhist cosmology we encounter him as the “Lord Of the Devas”, Śakra. 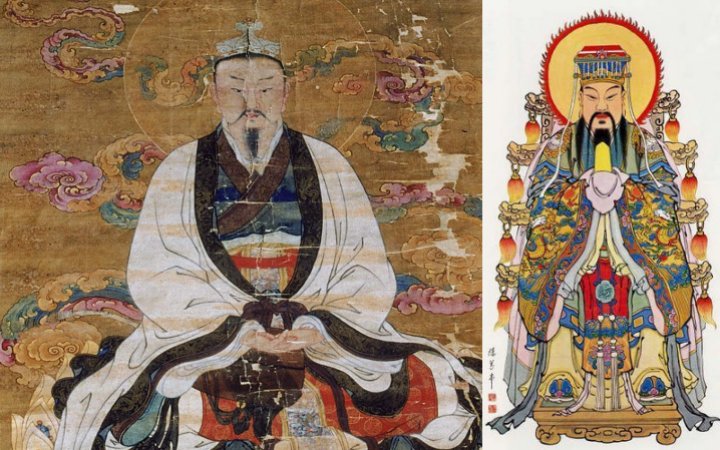 Since jade symbolizes purity, the mighty Chinese Emperor was also known as 'the Pure August One.'

In Chinese mythology, cosmos is divided into three domains such as Heaven, Earth, and the Underworld. Each of these domains is inhabited by various deities. The Earth is believed to be born from an egg, and the Jade Emperor is the ruler of the Heavenly domain, and according to some accounts the Earth as well, and even the Underworld.

The Jade Emperor, (Yuhuang or Yudi) is the Heavenly Grandfather and the first god. There are many interesting ancient Chinese creation myths. According to one myth, the Jade Emperor created the first humans from clay. They had to stay in the Sun so that their bodies would be harder. Then, came rain and their bodies were deformed. This explains why humans can be sick and experience physical abnormalities.

Jade Emperor’s Punishment Of His Daughter Zhinü, The Weaver Girl And The Birth Of The Milky Way

Another beautiful legend tells abut the jade Emperor’s daughter Zhinü, the weaver girl who was responsible for producing colorful clouds in the heaven. The weaver girl had a magical rope that she used to descend from the sky to Earth. She visited the Earth every day to bathe. One day a cowherd named Niu Lang spotted her. He stole her magical rope so she could no longer return to the heaven.  Niu Lang waited patiently and when the weaver girl emerged from the water, he grabbed her and took her home to his home. Zhinü and Niu Lang fell in love and the they became husband and wife.

The Jade Emperor was very angry when he learned that his daughter had married a simple cowherd, but the was nothing he could do about it.

One day, Zhinü, decided that she wanted to visit her father in his heavenly abode. She found the magical rope her husband had stolen and used it to climb to the Heaven. Now, the Jade Emperor had a perfect opportunity to punish her. He summoned a river to flow across the sky (the Milky Way), making it impossible for his daughter to cross and return to her husband. Zhinü was devasted and eventually the Jade Emperor felt sorry for the young couple. 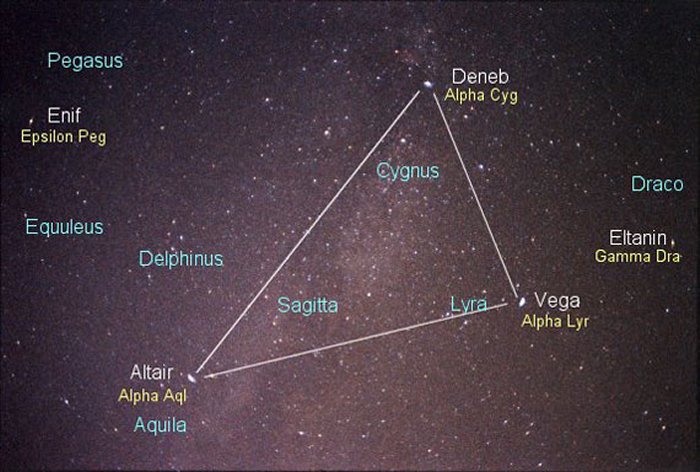 He let the young man and his daughter meet each other once a year on a bridge over the river. This always happened on the seventh day of the seventh month of the lunar calendar. According to the Chinese legend, Zhinü is the star Vega in the constellation of Lyra east of the Milky Way, and Niu Lang is the star Altair in the constellation of Aquila west of the Milky Way.

As previously discussed on Ancient Pages, there are there are two statues of Niu Niu Lang and Zhinü from the Western Han Dynasty (206 BC – AD 24), in Changjiazhuang village and a cotton mill in Doumen town in Xixian New Area of Shaanxi province. Both of these statues have caused some controversy because some are disappointed by their appearance.

Zhinü and her husband were not the only beings who were punished by the Jade Emperor. For example there is a wonderful ancient legend that describes how four dragons disobeyed the Jade Emperor and gave China water in times of crisis.  The Heavenly Grandfather rewarded good deeds and punished bad behavior. According to Taoism teachings, once a year all members of the Jade Emperor’s palace household must appear before him so that he could account for their actions. Misbehavior could be punished by getting a lower heavenly rank. The Kitchen God, and other gods supervised over human families and reported to the Jade Emperor about the mortals’ behavior so that people living on the Earth could be either rewarded or punished.

Was The Jade Emperor A Historical Person Born Of A Fraud?

In the book Myths and Legends of China, Werner,  E.T.C   presents an interesting account how the Emperor came into existence. Werner proposes that the deity was entirely fabricated following a disastrous military defeat. As Werner writes, “the history of this deity, who later received many honorific titles and became the most popular god, a very Chinese Jupiter, seems to be somewhat as follows: The Emperor Ch'êng Tsung of the Sung dynasty having been obliged in A.D. 1005 to sign a disgraceful peace with the Tunguses or Kitans, the dynasty was in danger of losing the support of the nation. In order to hoodwink the people the Emperor constituted himself a seer, and announced with great pomp that he was in direct communication with the gods of Heaven.

In doing this he was following the advice of his crafty and unreliable minister Wang Ch'in-jo, who had often tried to persuade him that the pretended revelations attributed to Fu Hsi, Yü Wang, and others were only pure inventions to induce obedience. 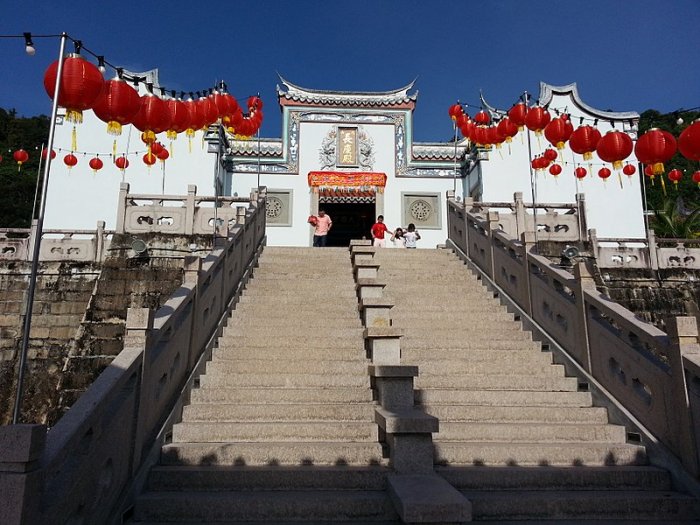 The Emperor, having studied his part well, assembled his ministers in the tenth moon of the year 1012, and made to them the following declaration: "In a dream I had a visit from an Immortal, who brought me a letter from Yü Huang, the purport of which was as follows: 'I have already sent you by your ancestor Chao [T'ai Tsu] two celestial missives. Now I am going to send him in person to visit you.'" A little while after his ancestor T'ai Tsu, the founder of the dynasty, came according to Yü Huang's promise, and Ch'êng Tsung hastened to inform his ministers of it. This is the origin of Yü Huang. He was born of a fraud, and came ready-made from the brain of an emperor.”

According to Keith Stevens, “the development of the supreme deity in China is far from clear. In earlier times the all-seeing, all-powerful, unseen god was Shang Ti who even now is occasionally referred to as the all-highest.”

The role and importance of the Jade Emperor can be discussed, and he does seem to many like a more human ruler than a divine deity. Also, many mythological beings can have been based on real historical figures.

Whether Werner or other scholars are correct in their assumptions or not, it cannot be denied that the legacy of the Jade Emperor has survived.

The Jade Emperor Is Still Celebrated

There are many captivating myths and legends about the Jade Emperor who is still celebrated by believers. The Jade Emperor’s birthday is on 9th day of the first lunar month, a day when people visit temples, make food offerings.

The Jade Emperor was said to be a vegetarian, and Chinese people go to the temples with vegetables, fruit and green tee, but they also prepare five animal sacrifice, something the Jade Emperor would most likely not appreciate, but people bring meat because the think the Emperor’s guest would appreciate the food. 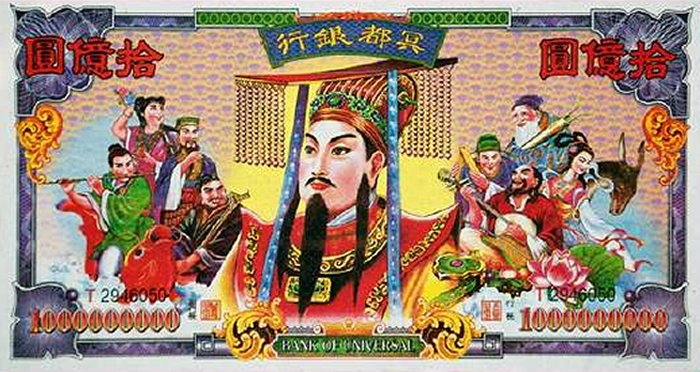 Spirit Money with the image of the Jade Emperor surrounded by the the Eight Immortals. Credit: www.nationsonline.org

The Jade Emperor is portrayed as a kind, respectable old man. In Chinese art he is depicted as a man with long hair, moustaches sitting on a throne dressed in full imperial costume. Jade Emperor’s depictions can also be found on each bill of spirit money, also known as hell money or heavenly money. Spirit money is a modernization of joss paper, an afterlife monetary paper offering used in traditional Chinese ancestor veneration.