David Tee - AncientPages.com  - Anne Askew (1521 - 1546), came from a very old and well-established family. The exact place of her birth is only known through local legend and she could have been born at Stallingborough, near Grimsby or Kelsey in Lincolnshire, UK. 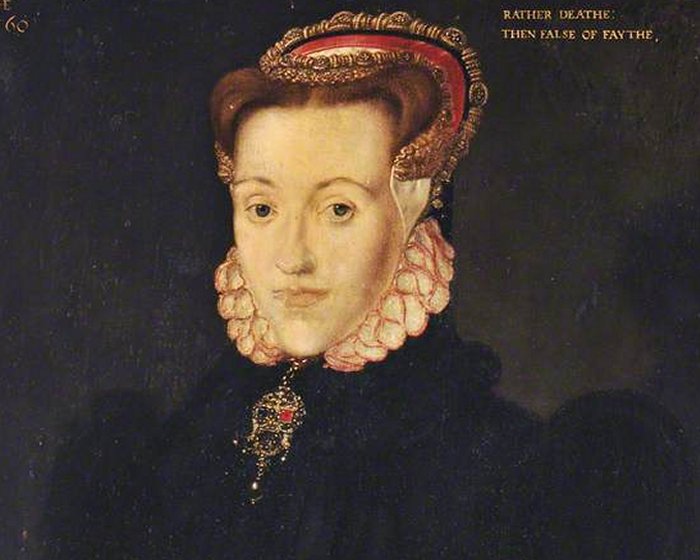 History is not always specific about minute details affecting the lives of people. Her father William Askew lived between 1490 and 1540 or 41 depending on which historical record you accept.

The only reason that has been said for her father marrying Anne to a Roman Catholic man, Thomas Kyme, 1517 to 1538, is that Anne’s older sister, Martha, had died. Thus, Anne was to be the man’s replacement wife. Her father did this betrothal against her daughter’s wishes because he wanted to save money.

This was not a good marriage because the couple each had their own distinct faiths, and neither was willing to compromise or give up their faiths to join the other. Anne’s protestant faith and her refusal to give way to her husband’s demands, or accept his beliefs, led to her married life to be one of extreme unhappiness. 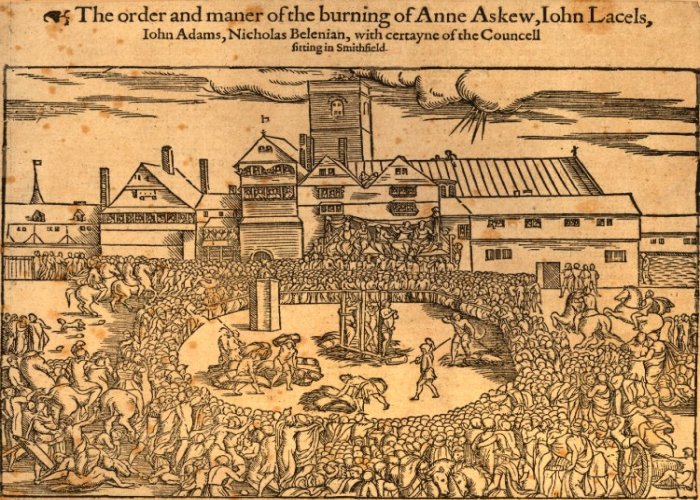 The Protestant martyrs Anne Askew, John Lascelles and others about to be burnt at the stake at Smithfield, with a large crowd surrounding them; illustration to John Foxe's, 'Acts and Monuments' ('Book of Martyrs'). Woodcut with letterpress. Image credit: British Museum

The marriage ended when her husband tossed her out of the house for her Protestant faith. At this time, Anne moved to London.

Anne did not use her married name but preferred to be known by her maiden name of Askew. That was how she was known when she met an English Anabaptist, Joan Bocher later burned at the stake for heresy during the rule of King Edward VI.

It is not known if Joan Bocher influenced Anne’s career change, but it was after this friendship began that Anne became a preacher of the gospel.

It is possible that Anne became more well-known since her former husband had her arrested in 1545. She was forced to return to Lincolnshire where he demanded that she remained. This incarceration did not last as Anne escaped and returned to London to continue her preaching ministry.

She was arrested a second time but was soon released. Continuing her preaching ministry, Anne was arrested a third time in May of 1546. Instead of being sent home to Lincolnshire, she was sent to the Tower of London.

Tortured For Her Faith And Information

While in the Tower of London, Anne was tortured to reveal the names of other highly placed women in society who thought like her. She refused to give names and her torture continued. Also, she was tortured for her faith as she refused to compromise her beliefs and accept the Roman Catholic faith.

Her torture was very severe. It is thought that Anne was part of a backlash against Thomas Cranmer, the Archbishop of Canterbury or it was an attempt to discredit the Queen, Catherine Parr. Whatever the reason, there were scores of Protestant people who were arrested and tortured to gain vital information on societal women.

Anne Was Carried To Her Execution

Anne Askew’s first arrest for heresy was in 1545. The verdict of this court case had Anne placed in jail for 12 days. In 1546, Ann was again arrested and tortured for information. We know of her time being tortured because Anne left a written account of her experience.

Her refusal to reveal names sent her to the rack whereby she passed out from the pain. Because the torture was so severe, she had to be carried to her execution. She died July 16th, 1546 with John Lascelles, Nicholas Belenian, and John Adams.