A. Sutherland - AncientPages.com - The moon god of the Eskimo people is Igaluk but it is only one of his several names. According to the indigenous peoples inhabiting the Arctic regions of Canada, Alaska, and Greenland (where he is known as Aningan (Anningan), he is the supreme, divine being that rules over natural phenomena.

He practically rules over everything and represents one of the most powerful gods in the Inuit pantheon. 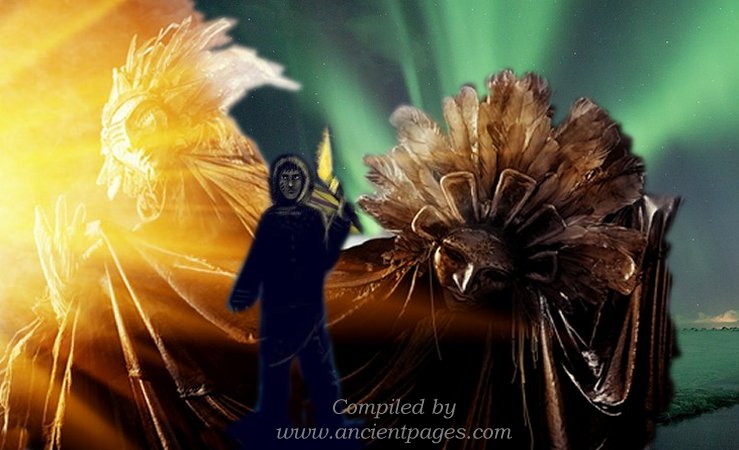 In Inuit beliefs, Malina, known for her beauty, passion, and courage, is a solar deity, Igaluk’s sister and he loves her very much. It does not mean though they have to be together all the time. Legends about this pair vary but they have one thing in common: Malina is endlessly fleeing from Igaluk.

One beautiful Inuit myth tells a story about these siblings, who were very close, playing and laughing together when young. It was a very long time ago when Igaluk and his sister were mortals and lived in a distant village far to the north. As they grew older, they came to live apart.

Nanna: Mesopotamian Moon God, Lord Of Wisdom And Father Of The Gods

One day, Igaluk who was not a child anymore, began to look at the women around him and his eyes fell upon his sister. He found that she was the most beautiful of all.

One night, as everyone slept, Igaluk sneaked into the women's lodge and forced himself upon his sister. As it was dark, Malina was unable to recognize who her attacker was, but the next night, she was ready.

When the same thing happened again, she covered her fingers with the lamp soot and smeared the visitor’s face with it.

Later, when the lamp was lit again, she was surprised to find that the mysterious man was Igaluk, her own, beloved brother who had violated her.

Unable to behave and think in a sensible way anymore, Malina was ashamed and very disappointed. She grabbed her torch and fled into the night. Igaluk chased after her, desperately crying out his apologies and begging forgiveness. His sister would not listen to him. With a flaming torch in her hand, she kept running and so did Igaluk, but he dropped his torch, and the flame was lost and only a faint glow remained.

The chase continued for a long time, and the two ran so fast, that they finally took off into the sky and became the moon and the sun.

Now they both dwell in heaven but in two separate rooms and so it will remain forever.

Igaluk, the Moon has since only interacted with his shining sister once: to create an eclipse, nothing more.

The Sun’s light is warmer and stronger and the Moon can never catch up with her because his light is much colder and weaker.

Freuchen P.  Book of the Eskimos