Ellen Lloyd - AncientPages.com - Ancient Egyptians had many creation myths and they were different. Still, people of ancient Egypt believed in them all and there was no reason to say one specific myth was more authentic than another. Ancient Egyptians could explain a phenomenon in many different ways. Nevertheless, all these creation myths had one thing in common. They held that the world had arisen out of the lifeless waters of chaos, called Nun.

An Egyptian creation myth tells that Geb was a member of the Ennead, a group of nine gods worshipped at Heliopolis, of the oldest cities of ancient Egypt, occupied since the Predynastic Period. Heliopolis was home to the cult of the sun god Atum, who came to be identified with Ra and later with Horus. 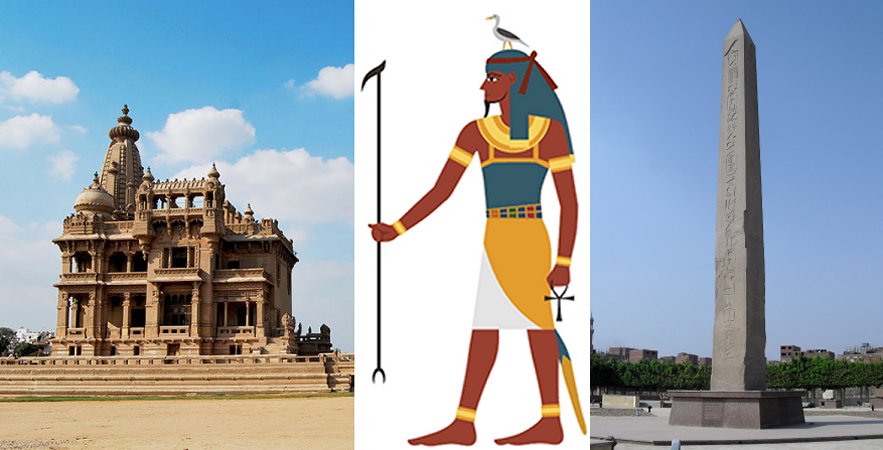 Geb was the god of Earth and he was feared as the father of the snakes. It was said that his laughter created earthquakes. This should not be taken literally of course. It simply meant that he was so powerful that Earth trembled when his laughter was heard.

According to Egyptian mythology, Geb was the son of God Amun who emerged from Nun, the water of chaos in times before heaven and earth were separated.

Geb and Nut were the parents of Osiris and Isis. Since Nut as a sky goddess is only visible daytime, it was believed she was separated from Geb so that God Shu could create cosmos.

Modern scholars have interpreted the separation between Geb and Nut in more romantic terms.

As Jonalyn Crisologo writes in the book Egyptian Mythology - Ancient Gods and Goddesses of the World, “similar to Atum, Ra sprung forth from Nun, the origin of all that ever was and is. Certain translations say Ra was Nut’s first mate. However, she fell in love with Geb and this was a problem.

Neith – Fearsome Egyptian Mother Of The Gods – Creator Of Sun God Ra, His Archenemy Serpent God Apophis And The Universe

When Ra discovered their affair, he separated the two. Geb wept in despair. His tears flowed into the world, creating the seas and oceans. Eventually, Nut gave birth to the five most prominent deities of Egypt, completing the Ennead: Osiris, Horus, Set, Isis, and Nephtys. “

God Geb had many symbols. One of them was the goose, which he sometimes wore on his head.

According to Pat Remler, author of the book Egyptian Mythology A-Z, Geb’s daughter Isis once held the obscure title “Egg of the Goose.” At other times Geb was portrayed as a man wearing the red crown of the Delta and reclining on one side or seated on a throne. One myth says that when Geb and his wife, Nut, became the parents of the sun, he was hailed as the “Father of the Gods.”

In a Coffin Texts spell Geb was described as father of the snake Nehebkau.

The Shabaka Stone, an ancient Egyptian religious text, which dates from the twenty-fifth dynasty of Egypt mentions God Geb. From this rectangular slab of black granite we learn that God Ptah and God Geb designated Set as the Lord of  Upper Egypt, and Horus as Lord of Lower Egypt. 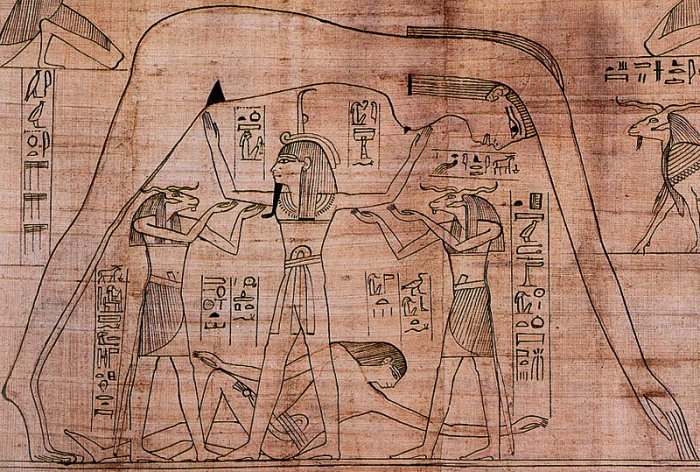 Detail from the Greenfield Papyrus (the Book of the Dead of Nesitanebtashru). It depicts the air god Shu, assisted by the ram-headed Heh deities, supporting the sky goddess Nut as the earth god Geb reclines beneath. Credit:  Public Domain

Geb was a powerful and very important god, who was he was the of judge in the Contendings of Horus and Set.

This story is documented on the Chester Beatty Papyri and the events of the twentieth dynasty of ancient Egypt can be read on the first pages. The ancient text describes the battles between Horus and Seth to determine who will succeed Osiris as king.

God Geb gave his son Osiris to rule the Earth, but he was killed by his evil brother Set.

Horus sought revenge for the killing of his father and he murdered Set. Geb rewared Horus and gave him the Earth to rule. As Remler explains, it was from this myth that the titles of the pharaoh  “Heir of Geb” originates.