A. Sutherland - AncientPages.com - Huehueteotl may be one of the earliest gods in the Aztec mythology, but he was not added the Aztec pantheon, until these people arrived in the Valley of Mexico.

He is a Mesoamerican deity worshiped among pre-Columbian cultures, mainly in Aztec mythology and others who inhabited the Central Mexico region. 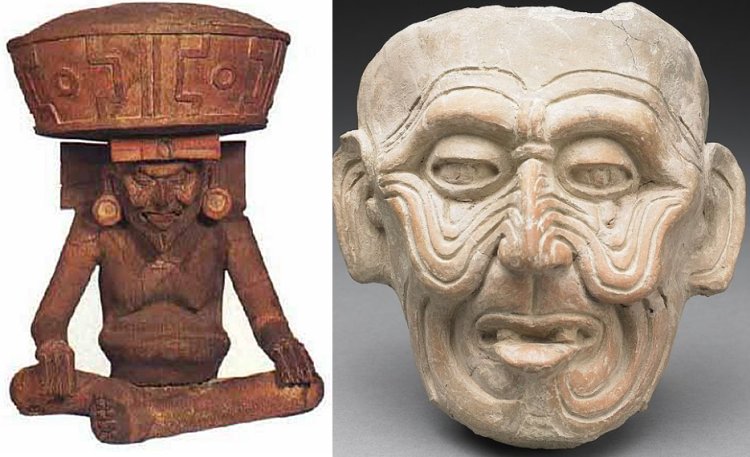 In the Aztec ancient beliefs, it was Huehueteotl, who kept time in harmony and balance.

Name of Huehueteotl means: "old" (in Nahuatl: huēhueh) and "god" (teōtl). It is believed this god is associated with the Old God known as ‘Mam’ ("Grandfather") in beliefs of ancient Maya.

The deity originates in times before the rise of one of the oldest cities of Mexico - Teotihuacán. Ancient sources say that Huehuetéotl was already worshiped in the old town of Cuicuilco that was once a significant ancient site in the southeastern Valley of Mexico but in 50 BC, it was destroyed and abandoned.

From there, his cult spread to Teotihuacán, which was confirmed by discoveries of clay statues of this deity, depicting him as a bent old man sitting cross-legged and carrying a strange vessel on his head.

Significance Of Huehueteotl In Relation To Fire

For the Aztecs, fire was of great importance. In the Aztec religion, Huehueteotl supervised the domestic hearth fire of the household. A hearth has always been an important place for families in many ancient cultures around the world, including the Aztecs.

The hearth functioned when it was fire in it. But to the Aztecs, fire was also a symbol of change and renewal.

Florentine Codex: Remarkable Manuscripts About Life Of The Aztecs

Many images of Huehueteotl were unearthed in ruins of residential quarters of the Aztec people but not in temples.

Huehueteotl symbolizes the keeping of time and aging. He is usually depicted as an aged or even crumbling being, often with a beard. Another god known as Xiutecuhtli, has very similar attributes to Huehueteotl but is portrayed as a young and dynamic man. Xiutecuhtli is a god of fire, day and heat and rules over volcanoes. He symbolizes warmth in cold (fire) and light in darkness.

Of all the Aztec deities, the god of fire and the heat of the earth, Huehueteotl ('old', 'old god'), is probably the one whose origin is the oldest. The grandfather of the pantheon, his seniority is indicated by the wrinkles that cover his face, the two teeth and the curvature of his spine. Huehueteotlof  is depicted sitting cross-legged, his hands are resting on his knees. Image credit: MEG

The Florentine Codex is most probably the best known of the many codices dealing with the Aztecs. This codex identifies Huehueteotl as an alternate epithet for Xiutecuhtli, and therefore that deity is occasionally referred to as Xiutecuhtli-Huehueteotl.

Ceremony Of The New Fire

It is known that the Ceremony of the New Fire was dedicated to Huehueteotl and it took place at the end of every 52 year calendar cycles.

During the ritual of New Fire, all fires through-out the land were extinguished and the entire Aztec population was plunged into darkness. Priests would watch the movement of the stars and look for the signal to tear out a sacrificial victim’s heart; then they would start a fire on the body and take it around to all homes in the area. This ritual replicated the way in which Aztecs believed the gods first created fire and postponed the end of the world.