A. Sutherland - AncientPages.com -  Many intriguing legends surround Melusine (Melusina), a daughter of Pressina. Melusine was a charming water fairy and a fictional figure in a well-known European legend.

This figure of European folklore and mythology (probably a tradition of ancient Gaul), is mentioned in countless fascinating stories of people that lived across France, Luxembourg, Germany, Bohemia as well as parts of the Iberian Peninsula, the Balkans, and Asia Minor around the millennium before Christ onwards. 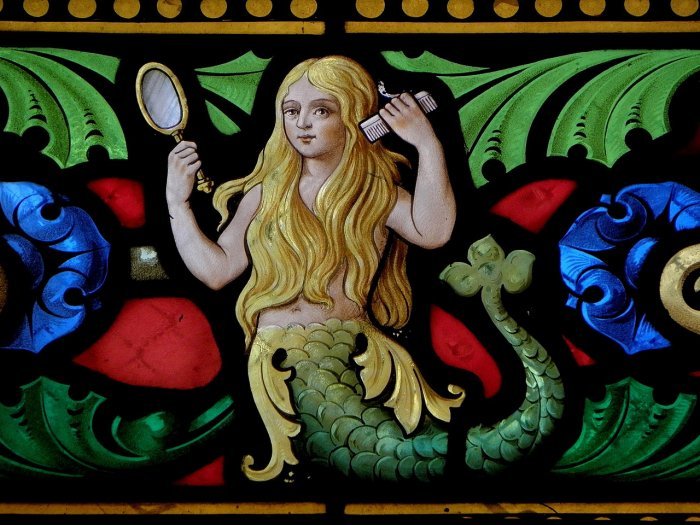 The fairy Mélusine: the image of the fairy with the long hair, its mirror in the hand, decorates one of Saint-Sulpice church’s stained-glass windows. Image credit: Pays de Fougères.

In old times, throughout the Celtic lands, lakes were believed to be entrances to the otherworld. In magnificent palaces located in those lakes lived fairy women who were occasionally seen from shore. In Celtic beliefs, they made perfect wives for human men but only under certain conditions.

An ancient French story tells that Pressina, who was a beautiful water fairy, married a human man but this union was not unconditional. It was based on a certain promise demanded by the wife—in this case, that the husband should never see her while she was delivering a child or bathed.

Unfortunately, Pressina’s human husband was not able to keep such a promise. Excited and happy when he heard that his wife had delivered triplets, he entered her birth chamber. Surprised, he saw a very angry woman who immediately reminded him of his broken promise, then disappeared with the children.

Folk tales and medieval literature were strongly inspired by Melusine and her own story was given in many different versions but most of them confirm that Melusine was the oldest of Pressina’s three daughters, (two others were Meliot and Palatina.)

Melusine is usually depicted as a beautiful young creature with the head and upper body of a woman and the tail of a fish but sometimes also with wings. She is elusive and potentially dangerous spirit dwelling in and around streams and fresh water springs. 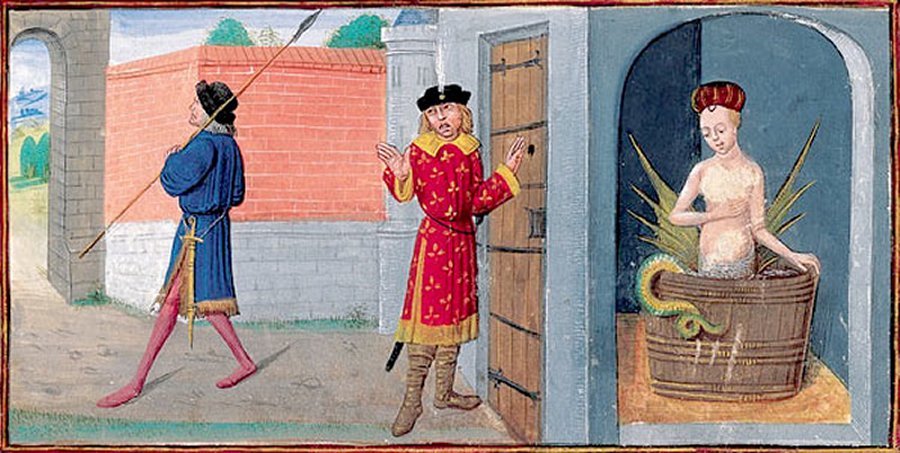 Raymond walks in on his wife, Melusine, in her bath and discovers she has the lower body of a serpent. Illustration from the Jean d'Arras work, Le livre de Mélusine (The Book of Melusine), 1478. Image via wikipedia

She grew up angry at her father for breaking his promise and therefore denying them the luxuries of human life. When Melusine was old enough to take revenge on her father, she arranged a raid on her father’s castle, detaining him and all people around him inside a magical mountain. Her mother, however, did not like the daughter’s revengeful action and she cursed her to become a serpent from the waist down on every Saturday.

The spell would be broken when Melusine met a man who would marry her and promise never to see her on Saturdays, and so it happened one day.

One day, Melusine wandered to the forest of Colombiers in Poitou, one of France's historic provinces, which in the Middle Ages was part of Aquitaine that passed to France in 1137 when the famous and powerful duchess Eleanor of Aquitaine married Louis VII of France.

In the forest, Melusine met a young nobleman named Raymond; they fell in love and married. Like her mother, Melusine put certain limitations on her human husband who had to promise that he would never enter her rooms on Saturday (Sunday) because this particular day she must spend in complete seclusion.

They lived happily many years together but one day, something unpleasant happened and this incident had serious consequences for both Melusine and Raymond.

Like many other human men married with fairy women, also Raymond was unable to keep promise given to his wife. One Sunday, he really could not resist temptation and spied on his wife.  His discovery was shocking: Melusine was a part-woman, part-serpent. It was a secret that Raymond could not keep to himself. Soon thereafter, during a disagreement, he called her a "serpent" publicly in front of his court. From this moment, their marriage was over. Melusine was not angry but very sad; she altered her appearance to a winged dragon and disappeared never to be seen again.

One legend says that the grief-stricken Raymond became a hermit until the day he died. According to another version of this sad story, Melusine was so furious at Raymond’s betrayal that she momentarily disappeared and thereafter haunted his family as a kind of Banshee.

Melusine became closely related to significant historical events taking place in contemporary Europe. As her popularity grew she started to appear in countless folk tales and medieval literature that continuously shaped the people’s imagination and fantasy.

Interpretations of Melusine’s personality and nature varied. Some turned her into an evil beast like in "The Cathedral", an 1898 novel by Joris-Karl Huysmans, while others maintained she was a beautiful young mermaid. Melusine was undoubtedly an intriguing figure that occupied the mind of famous people such as for example, Martin Luther, Johannes W. Goethe and Lamotte Fouque in his story “Undine” devoted to a young knight who swore eternal loyalty to the water sprite, Undine, but finally, broke his promise and was killed by her.