A. Sutherland - AncientPages.com - Christmas is one of the greatest celebrations in the Christian calendar. We dress Christmas tree, eat and surprise each other with gifts. For many of us it is a very special time since we celebrate the birth of Jesus Christ. 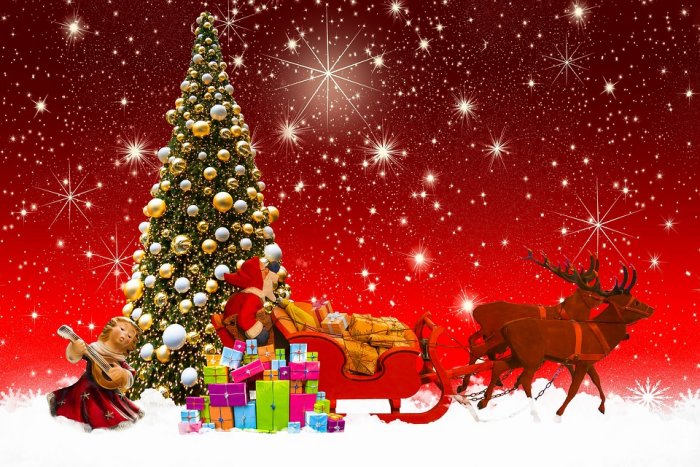 During this period most towns, villages, and large cities are decorated with Christmas lights.

Santa Claus And His White Beard

Santa Claus comes to children in most European countries. According to folklore, he is an older man with a white beard and usually a big belly. Known under many names such as Saint Nicholas, Kris Kringle, Father Christmas, or Santa,  he has a distinctive red outfit and according to different legends, he distributes gifts during Christmas.

Christmas Time Around The World

The oldest references to Santa Claus, originate from the historical Saint Nicholas of Myra (70 – 343 AD), an early Christian bishop of the ancient Greek city of Myra (Lycia) in Asia Minor (modern-day Demre, Turkey) during the time of the Roman Empire. The good-hearted St. Nicholaus was famous for his habit of secret gift-giving and helping people in need.

In UK, Santa Claus leaves gifts for children, in stockings, usually hung up by the fire or by the children's beds on Christmas Eve

According to tradition, in return, Santa gets sometimes a glass of alcohol and carrots for the reindeers.

Santa is welcomed by children in countries like Belgium, Germany, Poland, France, Portugal and many more, but in Ukraine, for instance, children get their gifts from either Svyatyy Mykolay or Grandfather Frost who also visits the Russian children. 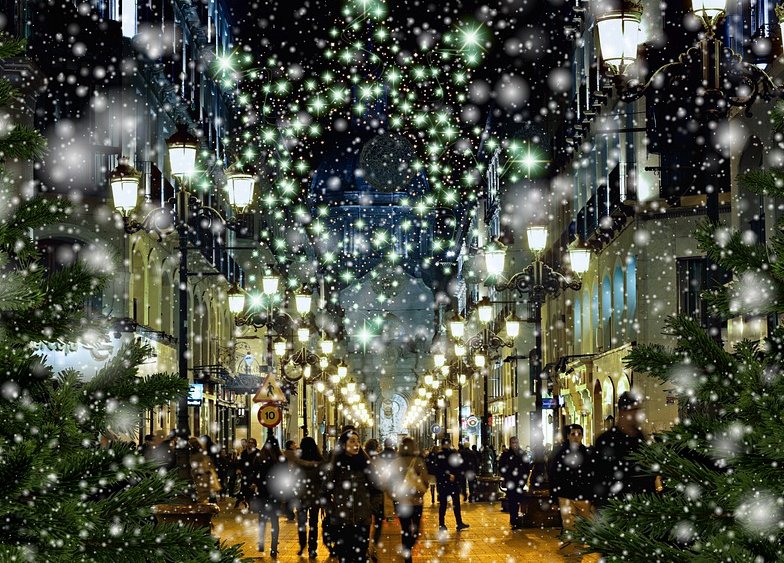 Since a majority of Ukrainians are Eastern Orthodox, most of the country celebrates Christmas Day on January 7 in accordance with the Orthodox religious calendar.

In Norway, the gifts are sometimes brought by 'Julenissen' (Norwegian Santa Claus) or by the small gnomes called 'Nisse'. In Spain, there is somewhat different tradition. Children get some presents on Christmas Day, but most of them are opened at Epiphany. Children believe that the Kings bring presents to them at Epiphany, the Twelfth Night of Christmas.

They write letters to the Kings asking for toys and presents. And on Epiphany Eve (January 5th) they leave shoes on windowsills or balconies or under the Christmas Tree to be filled with presents. Gifts are often left by children for the Kings, a glass of cognac for each King, a satsuma fruit and some walnuts. Sometimes a bucket of water is left for the camels that bring the Kings. It happens that for the naughty children, the Kings leave only pieces of coal made out of sugar.

La Befana, a good broomstick riding witch, is In charge of gifts, in Italy, where children eagerly count the days to the coming of her on Epiphany, the Twelfth Night of Christmas. La Befana has been an Italian Christmas tradition at least since the eighth century is celebrated every year on January 6.

According to the German tradition, Christmas tree in are often decorated with … cucumbers, hidden in the branches of Christmas tree, and other cucumber-like Christmas decorations. This decoration has a special meaning; a child, who first finds it, gets an additional gift and will have good luck for the following year. 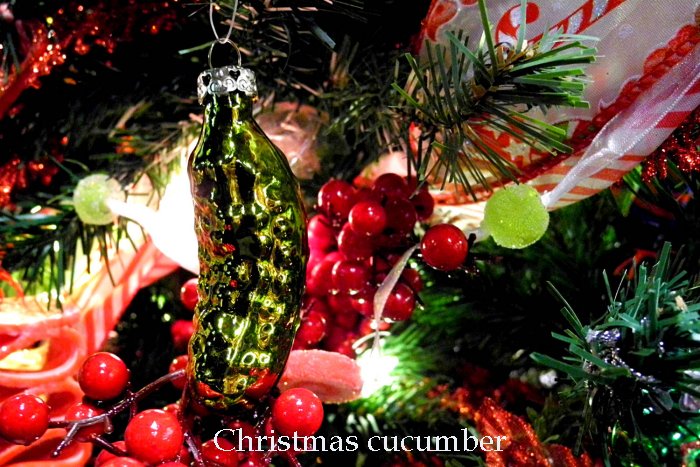 Real red apples were once used to decorate Christmas trees in France, but one year, there was very bad harvest and people decided to use glass decoration instead. Pretty spiders and their web are a traditional and original decoration on the Ukrainian tree.

According to legend, there was a poor family who couldn’t afford to decorate their Christmas tree. A Christmas spider decorated the tree with spider webs that mysteriously changed to gold and silver on Christmas morning and these people were never poor again, and so this tradition continues.

One beautiful tradition comes from the US, were people still until today decorate their indoor trees adorn with strings of popcorn draped across the tree’s branches, and outdoor Christmas trees are decorated with food for birds and other wildlife.

Meals On Christmas Table Vary Much

In Belgium, France, Brazil, in the Canadian provinces of Quebec, Ontario and other French-speaking regions, is a long dinner - a réveillon, held on the evenings preceding Christmas Day and New Year's Day. It includes lobster, oysters, escargots or foie gras (made of the liver of a duck or goose). One traditional dish is turkey with chestnuts and for dessert, a chocolate sponge cake log called a bûche de Noël is eaten. 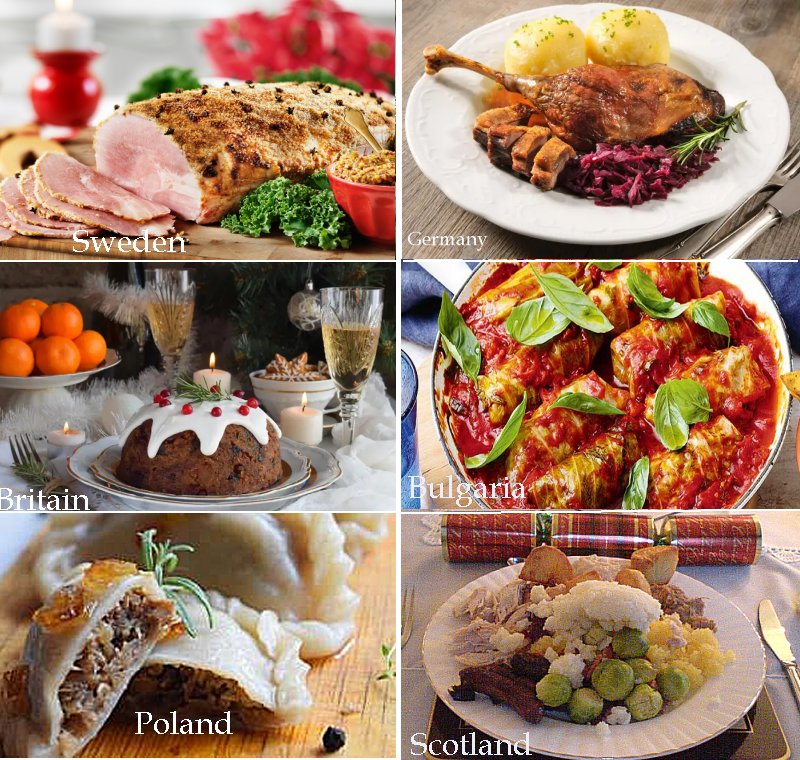 In Poland, on the traditional Christmas Eve dinner table, you will find 12 dishes that include red borsch with dumplings with cabbage and mushrooms, a traditional vegetable salad and fish, etc. They symbolize the number of months in the year.

Before, partaking of the Christmas Eve meal, the family gathers around the table, the eldest member holds a large wafer and breaks off a piece to begin the ritual (ritual, celebrated in Poland, Lithuania and in some parts of Slovakia).

The remaining wafer is passed on to another member while a prayer for loved ones is said. This continues until everyone at the table has a piece of the wafer.

The French first go to mass in the Church, and then sit for the common dinner called Le Réveillon, a long dinner, and possibly party, held on the evenings preceding Christmas Day and New Year's Day. The Danish eat roast pork with crackling, turkey, or goose stuffed with dried plums and apples and served with potatoes, red cabbage. 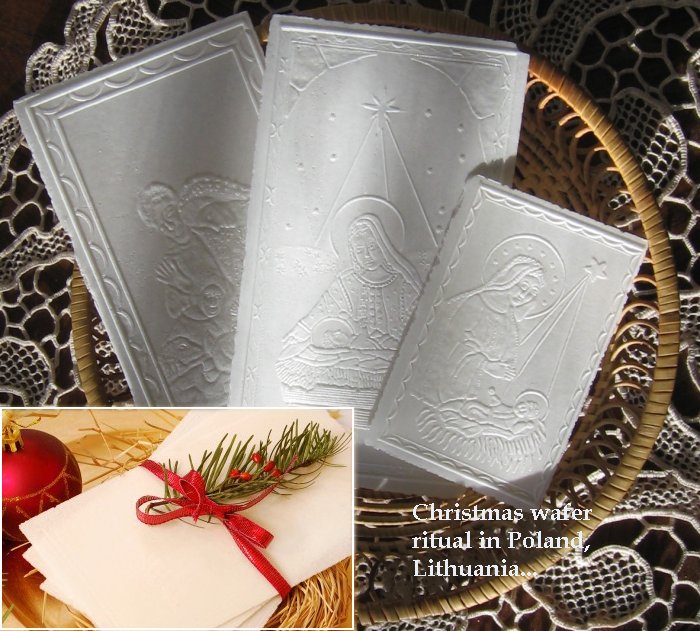 Their dessert is Risalamande (rice pudding served with cherry- or strawberry sauce) often with a whole almond hidden inside. The lucky finder of the almond is entitled to an extra present, the almond gift.

A Yule log is a traditional dessert served near Christmas, especially in Belgium, France, Switzerland, Quebec, Lebanon and several former French colonies, as well as the United Kingdom. Made of sponge cake to resemble a miniature actual Yule log, it is a form of sweet roulade.

These are just some of the customs and dishes traditionally eaten at Christmas. However, as the proverb says: "Every country has its customs”. Therefore, Christmas tradition varies by country, its culture and tradition.