A. Sutherland - AncientPages.com - In the 4th century B.C. two great individualities of the contemporary world met each other: Alexander the Great (356–323 BC) and Aristotle of Stagira (384–322 BC) one of the greatest philosophers of all time. 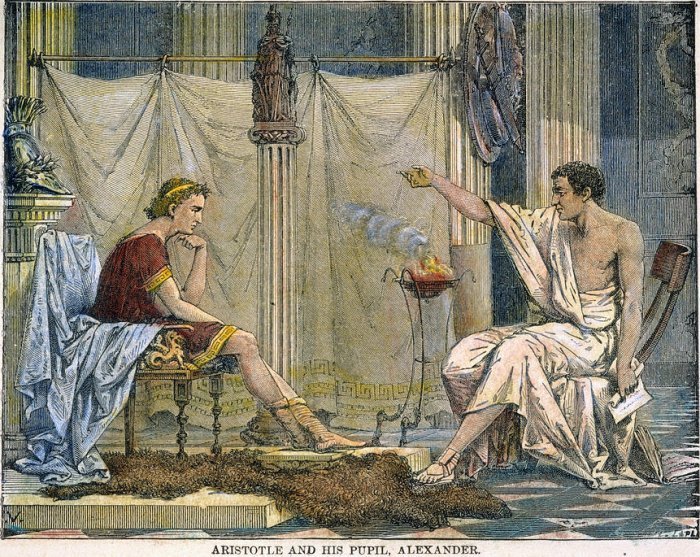 In 343/342 B.C., when Alexander was 13-year-old prince, his father, Philip II, Macedonian ruler of the kingdom of Macedon from 359 B.C. to 336 called Aristotle to his court. Aristotle was a tutor worthy of the prince so Philip employed him and paid a handsome and appropriate fee.

Alexander's Education Place - Midas Gardens In The village of Mieza

King Philip assigned to Aristotle the Precinct of the Nymphs at Mieza, a village in Ancient Macedon as a place of education.

According to Plutarch (45 – 127 A.D.), a Greek biographer and essayist, at first, Alexander was influenced by his earlier teachers, however, Philip did not trust them much.

Aristotle And His Mind

Aristotle's interests included logic, physics, theory of poetry, politics, and nature, to considerations on the foundations of reality and morality but he was not very fond of mathematics. He was a student of the great philosopher Plato, and studied at his school, the Academy for 20 years. Aristotle was also a great naturalist and one of the first known historians of bibliophiles. The genius mind taught Alexander, and probably some other very young nobles who later became great chiefs and kings.

The employment as a tutor gave Aristotle many new opportunities. He could establish a library in his Lyceum in Athens and king Philip resettled Aristotle’s birth place Stageira), bringing back those of its citizens who had been enslaved or exiled.

The cooperation lasted three years and had an unquestionable influence on Alexander, the young heir to the throne.

We know about this education mainly from the second, third and even fourth hand. The young pupil certainly read Homer's "Iliad" and "Odyssey", the basis for the education of every cultural Greek. Apparently, he did not part with the copy of "Iliad" with Aristotle's comments. He even took it with him for a war campaign that would take Alexander from Greece to India and make him the conqueror of almost the entire world (known to the ancients).

However, there are good reasons to think that the student did not follow the path the philosopher pointed out to him. 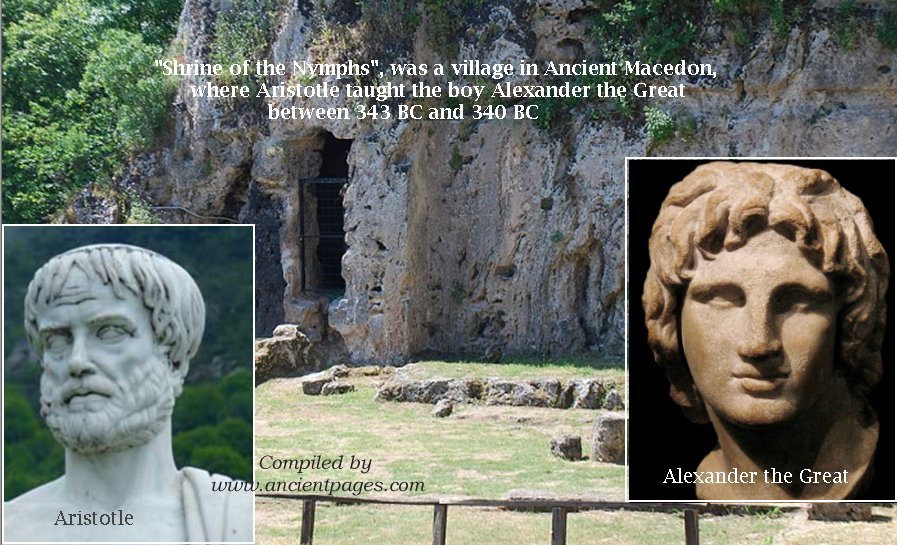 Aristotle passed many of his ideas on Alexander; however, it is not clear how the studies with Aristotle influenced the young mind of Alexander. There have been no surviving books, letters, papers and other works which were the result of the teachings in Mieza.

The young Alexander was interested in reading and learning. His favorite book Homer’s Illiad was particularly important to him, even more, it was his ‘guide-book of the art of war‘.

According to Onesicritus, Greek historical writer, who accompanied Alexander the Great on his campaigns in Asia, Alexander took with him Aristotle’s revised version – the so-called “casket copy” and always had it under his pillow along with his dagger.

It was not easy to find books in isolated regions of Asia, So Alexander ordered to send him the books of Sophocles, Aeschylus and several tragedies by Euripides.

In the book "Alexander the Great", Waldemar Heckel and J.C. Yardley say:

"Initially he had a great regard for Aristotle, whom he loved no less than his father, as he used to say – thanks to the one he had life, and thanks to the other he knew how to live well.

Later, however, he regarded Aristotle with some suspicion, not enough to want to do him harm, but the fact that his familiarity with him lacked its former intensity and warmth indicated a rift in their relationship...." 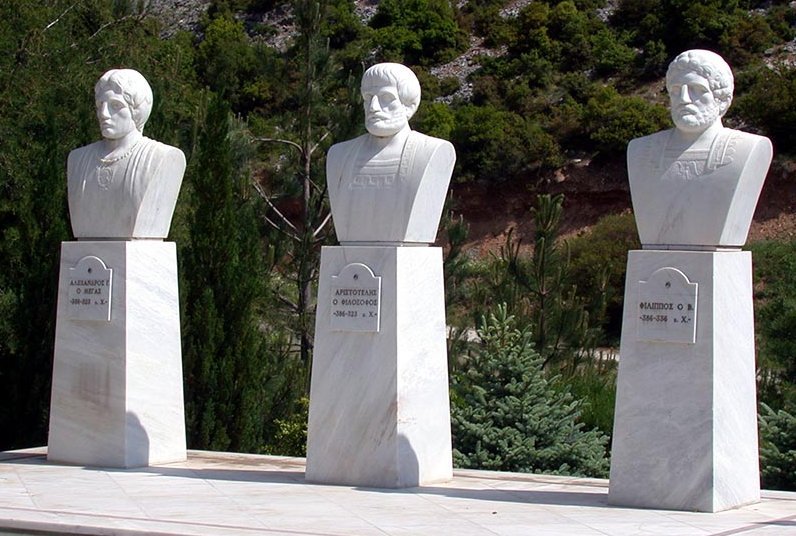 Aristotle taught Alexander to regard hedonistic life as completely worthless. It must have had a strong appeal for Alexander, who possessed highly developed self-control and self-denial (at least during the earlier stages of his career). He used to eat very little and give away loots of war keeping very little for himself.

Therefore, at the beginning of his reign, Alexander followed the doctrine of his teacher and fought against hedonism.

Alexander developed “a strong interest in medicine and biology — two more of Aristotle's own favorite subjects. Throughout his life he was, Plutarch says, ‘not only fond of the theory of medicine, but actually came to the aid of his friends when they were sick, and prescribed for them certain treatments and regimens”. (P. Green, Alexander of Macedon, 356–323 B.C)

Famous Philosopher Plato: One The Greatest Thinkers Of All Time With Special Interest In The Concept of Soul

Antisthenes And Diogenes – Founders Of Cynicism Were Ancient Greek Philosophers

Alexander had much scientific curiosity and respect for science. When Alexander launched his Asiatic invasion, he took with him zoologists, botanists and other scientific experts who later contributed with crucial material for science.

He read and discussed poetry, especially Homer; he was taught basics in geometry, astronomy, and rhetoric and was also interested in philosophy, medicine and natural sciences.

Political Views Of The Young King And Warrior

It is difficult to establish to what extent Aristotle's philosophical views have shaped the young Aleksander's way of thinking. Most probably there were very few things that both agreed on, said the 20th-century philosopher Bertrand Russell.

Aristotle's political views were based on the obsolete concept of the Greek city-state at that time. The idea of a small city-state could not speak to an ambitious prince who wanted to build a large, centralized empire. Alexander also had to be skeptical about the Aristotelian principle of treating non-Greeks like slaves, because he was dreaming of a vision of an empire based on fruitful, partnership cooperation between winners and the losers.

Alexander The Great Disagreed With Aristotle On Some Issues

In his book “Alexander the Great“, Peter Green writes that if Alexander took over some of his tutor’s ethics, he did not agree with his teaching about the state.

Aristotle believed in the division of people into Greeks and Barbarians. These views are reflected  in his quest to gain glory at the expense of peoples standing lower than the Greeks. Slavery was something completely natural to him, and non-Greeks were supposed to be non-Greeks. According to Aristotle's teachings, Alexander wanted to become a Greek Chief and a despot for the Barbarians. He despised the Athenian democracy, being convinced of the supremacy of his family over all other people and nations.

The three years spent with Aristotle and his teachings played an important role in life of Alexander and left a permanent mark on him. Once his education was accomplished, Alexander was on his own. These two prominent minds met only occasionally, if at all.

Martin Thomas R. Alexander the Great: The Story of an Ancient Life