Ellen Lloyd - AncientPages.com - Known by his nickname, Grutte Pier was a man of extraordinary strength and size. His real name was Pier Gerlofs Donia, and he was born in 1480 in Kimswerd near the city of Harlingen, Wonseradeel (modern Friesland, Netherlands).

He was a unique individual who should have been an ordinary farm boy, but when his village was plundered and his wife killed, he sought revenge on those who cost him pain and sorrow. To some Grutte Pier was just a brutal rebel and pirate, but many regarded him as a legendary freedom fighter.

Just like the Varangian Guard, they were military warriors hired to take part in an armed conflict. 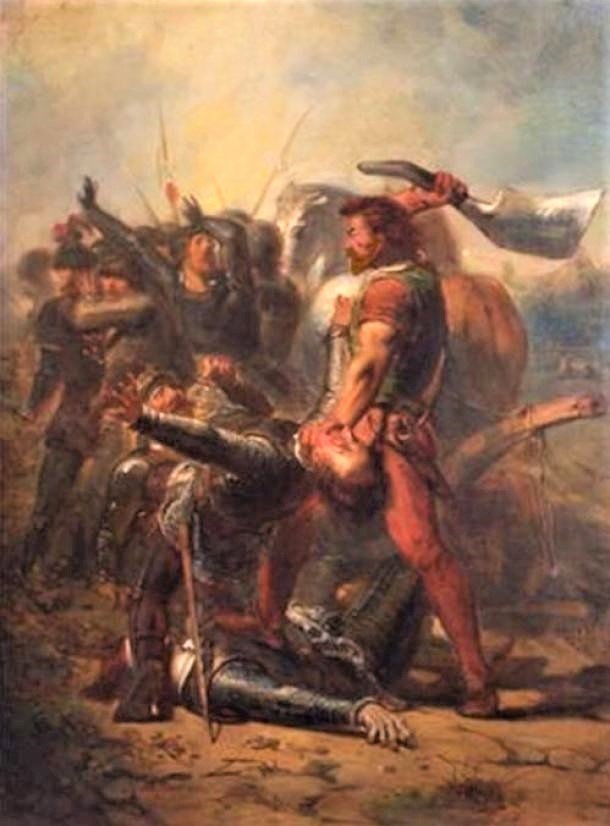 Seeking revenge, Grutte Pier allied himself with Charles of Egmond, Duke of Gueldersand started a guerrilla war campaign against the House of Habsburg, also called the House of Austria. Grutte Pier blamed the Habsburg authorities for the events because they had employed the murderous regiment. 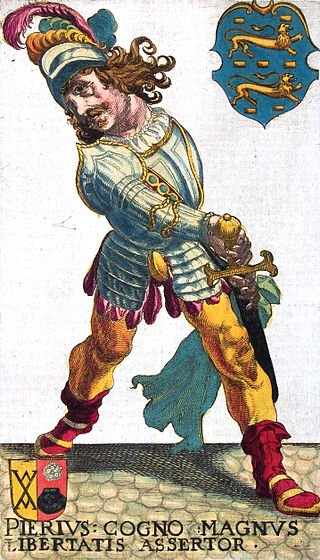 Image of Grutte Pier made in 1622, long after his death which is why he is dressed in 17th-century clothing. Credit: Public Domain

When Pier and his army stormed Nieuwburg and Middleburg Castle near Alkmaar, they plundered and set them on fire, leaving only ruins. Now he and the Arumer Zwarte Hoop were controlling a strategic military area.

In 1517, the Arumer Zwarte Hoop captured the town of Asperen, where they killed almost all inhabitants.

Pier’s Forces Could Not Win Over The Habsburgs

Grutte Pier’s freedoms fight was undoubtedly successful, but he was also criticized for killing many innocent people.

At the end, the Habsburgs were too strong and couldn’t be defeated.

In 1519, Grutte Pier retired, and his Lieutenant Wijerd Jelckama took command over the Arumer Zwarte Hoop. The peasant rebels fought for some years until they were finally captured and executed in 1523.

Grutte Pier died peacefully on 18 October 1520. Though he had no sons, he has many descendants through his daughter, Wobel. His tomb is located in the city of Sneek.

Grutte Pier And His Legendary Sword

At the Fries Museum in Leeuwarden there is a giant sword on display. It is said that it once belonged to Grutte Pier. These swords are known as Zweihänders, and they were mostly associated with either Swiss or German mercenaries known as Landsknecht. 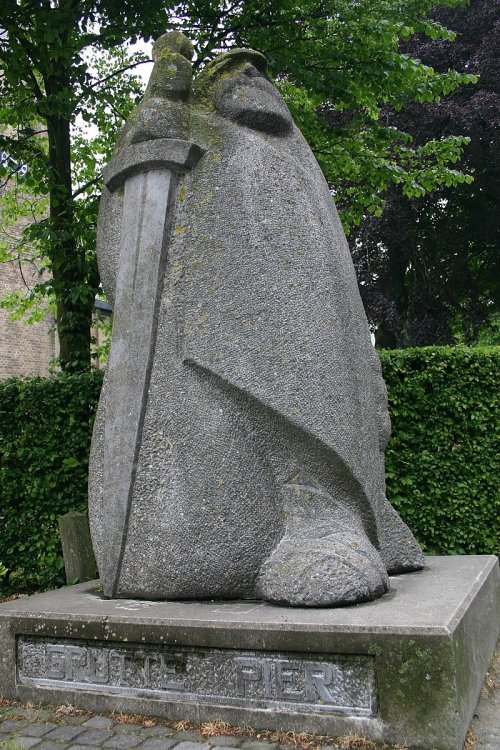 Statue of Grutte Pier in his hometown of Kimswerd. The line of text on the foot of the statue reads in Frisian "Grutte Pier". Credit: Public Domain - CC BY-SA 3.0

Grutte Pier’s sword measures 2.13 meters (7 ft) in length and weighs about 6.6 kilograms (14.6 lb). Needless to say, it takes someone of extraordinary strength to use this kind of sword.

According to his Lieutenant Wijerd Jelckama, Grutte Pier could wield the sword and behead multiple people with it in a single blow. Allegedly, the Frisian pirate and freedoms fighter was so strong that he could bend coins using just his thumb, index, and middle finger. His giant helmet can be viewed in the town hall of Sneek.

Was Grutte Pier a giant? He was certainly tall, but it’s hard to classify him as a giant. Records state that his height was about 213 cm.

Long after his death, Grutte Pier became a legend giving rise to stories of other strong men in Germanic heroic literature.