A. Sutherland - AncientPages.com - The history of Geghard dates back to pre-Christian times and traditions that date back to ancient times when Armenians were influenced by the Persians and their Zoroastrian religion.

At first, the monument was known as Ayrivank and after the 13th century, it became known under the name of Geghard (in Armenian: "spear" or “lance”), in memory of the Holy Spear, said to have been stored there.

The Geghard Monastery, located in the valley of the river Azat 30 kilometers East of Yerevan, has been a sanctuary for pilgrims over many centuries and one of Armenia’s greatest spiritual centers. The Church dedicated to the Holy Virgin Mary is the oldest, hewn in the rock monument in the Geghard Complex. 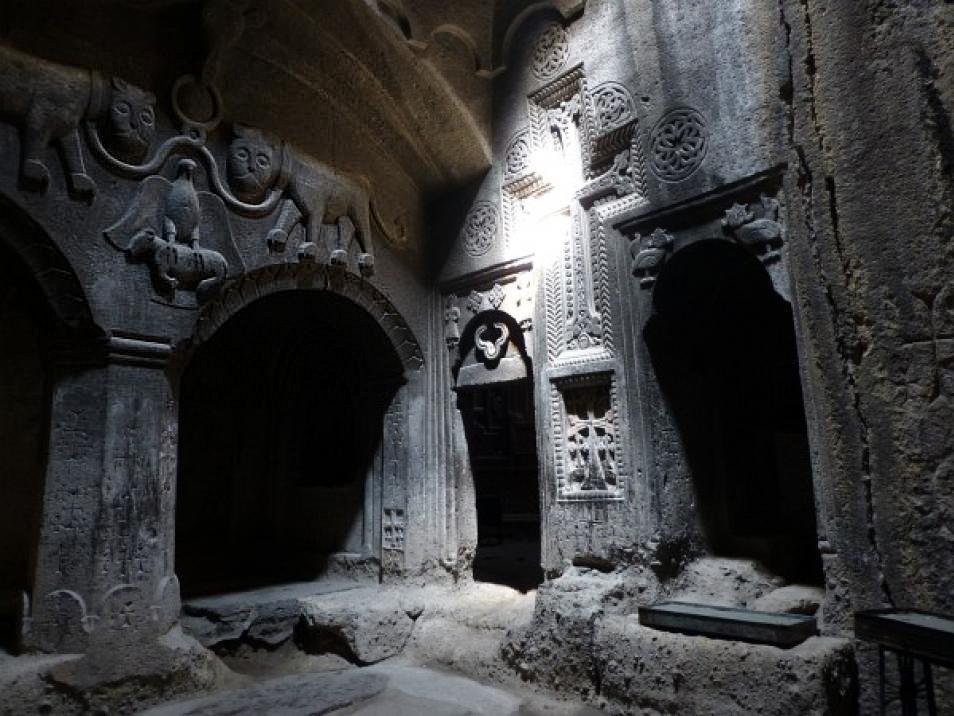 Outside, above the south door, there is the prince Prosh’s a coat of arms (lion attacking an ox) of the family of the Zakarian prince who built it. The lion symbolizes royal might.

However, the place was not only used for religious celebrations and worship but also as gathering place for discussing political, national and social issues of the country.

The monastery, partly carved out of the cliff rocks, is surrounded by high massive walls on three sides and the mountain on the fourth. Inside, there is a large number of chapels, which are interconnected and a maze of caves and secret rooms, tombs and khachkars (cross-stones) - outdoor steles carved from stone, which constitute an authentic Armenian form of art.

The main cathedral of cross-dome type was built in 1215, but legend has it that Geghard Monastery was founded in the 4th century. The first monastery at this site was called Ayrivank ('Cave monastery' or the 'Monastery of the Caves') but was burned down and plundered in 923. 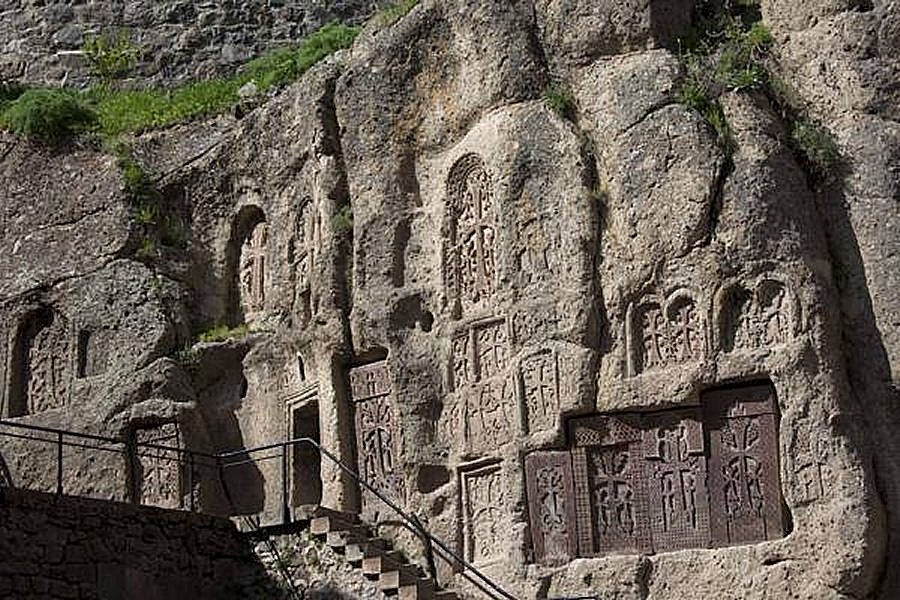 On the rock cliff walls near the cells and above the church, there are intricately carved khachkars (stone crosses) and the carvings date to the early medieval period, but most are from the 11th-13th centuries, with a few from later periods.

According to legend, the apostle Thaddeus brought a spear to the Geghard Monastery and it was the same spear, which had wounded Christ on the Cross.

In 1240, Armenian prince Prosh bought the monastery and conducted there a series of extraordinary constructing works along with the subterranean part carved out of rock.

The earliest surviving part of the monastery, the Chapel of the Mother of God, dates from before 1164. This chapel is partly connected with passages and small rooms, fully carved into the rock.

In total, surrounding the main site are more than 20 other rock-hewn chapels and service premises, many of which have carvings depicting a variety of animals, birds and flowers, as well as beautiful geometrical and floral patterns. 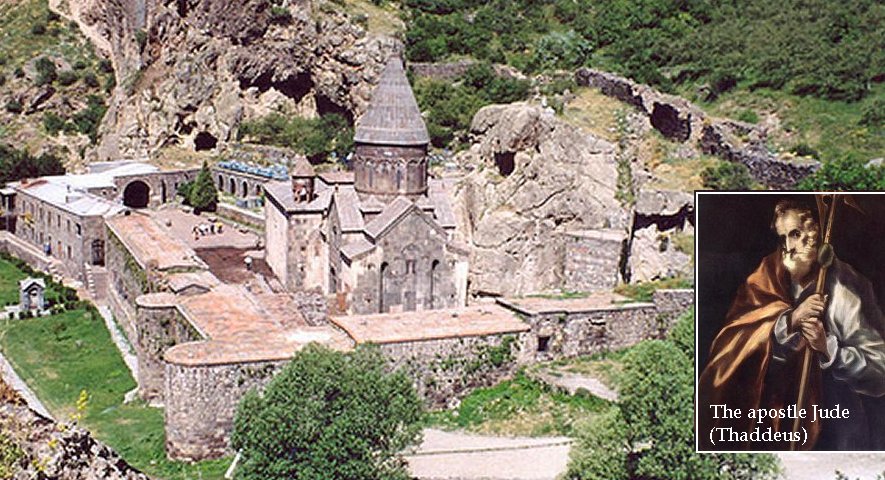 The spectacular towering cliffs surrounding the monastery are part of the Azat river gorge.

The southern facade has an interesting decoration in form of the prince Prosh’s a coat of arms (lion attacking an ox) of the family of the Zakarian prince who built it. The lion symbolizes royal might.

To the right of the entrance to the mausoleum, there are carved two sirens, mythical creatures with the crowned head of a woman and the body of a bird. 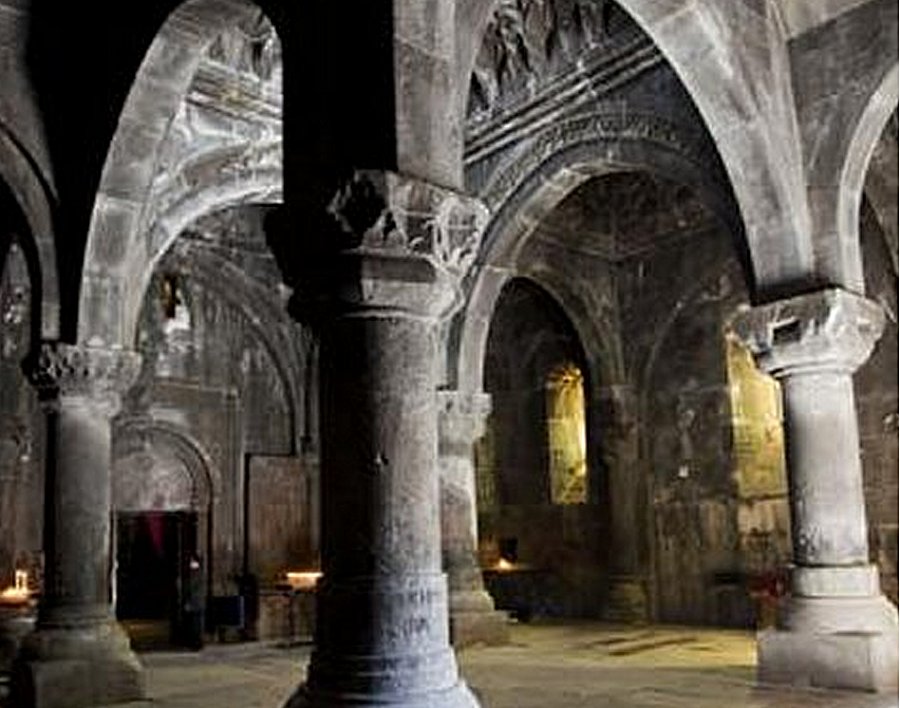 The Geghard Monastery complex contains numerous, perhaps even hundreds of  monk cells carved in the surrounding cliffs. The monastery had an ascetic tradition, and monks, who were originally hermits, lived, worked and prayed in the cells. Many of them did not leave their small quarters until they died.

See also:
Ancient Great City Of Ani: Lost Capital Of The Kingdom Of Armenia And It Mysterious Underground Tunnels

The acoustics of the monastery's chambers is impressive. One of the churches has been designed with the acoustics that produce a remarkable and mysterious sound, almost like a divine echo. The acoustics allowed the rooms to perfectly amplify monks' chants when the monastery was in use.

Monastic cells and several small churches, cut out of the surrounding volcanic tuff, represent
an 11th-century feat of engineering and architecture of the Armenian masters.