A. Sutherland - AncientPages.com - The relief plaques - very popular in the Sumerian society - were often covered with inscriptions and were dedicated to the gods by individual worshipers. They were usually fastened to the temple’s wall by means of stone nails inserted through a hole in the center of the plaque.

Many relief plaques were divided into registers and depicted numerous scenes including the pouring of libations, a fight between a hero and lion, or  banquets, devoted to celebrations of important historical and political events. 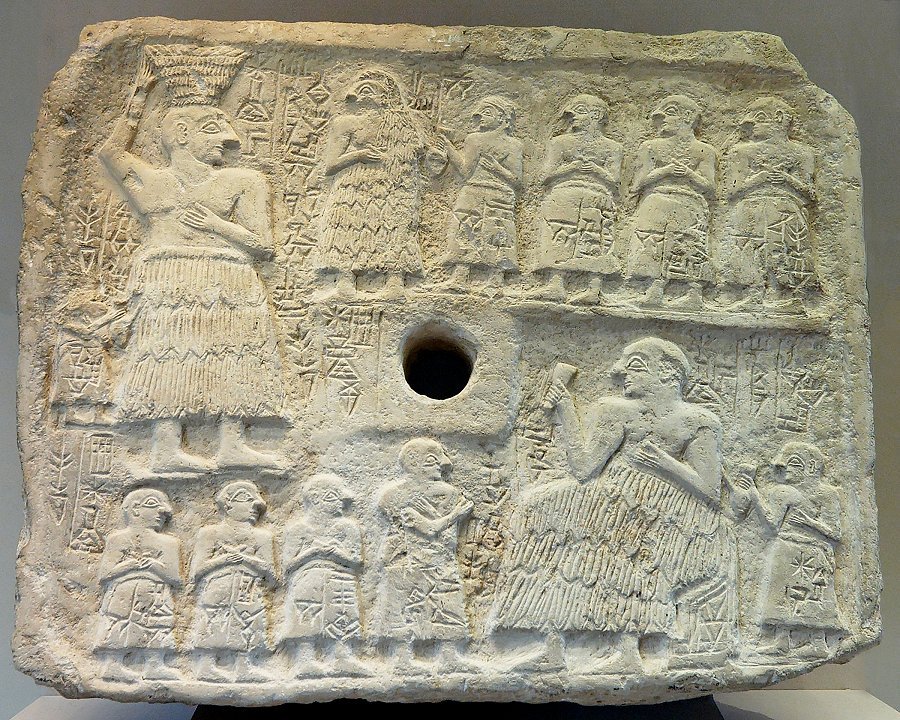 One of the most famous relief plaques was that of Ur-Nanshe, a ruler of the state of Lagash. This remarkable limestone slab dated to around 2300 BC, was probably intended to hang the slab to the wall in the ritual part of the shrine. Perforated stone slabs carved with low reliefs and pierced in the center are typical representations of  the art dedicated to the archaic Sumerian Dynasties.

This one is decorated with a low-relief in two registers. The upper register depicts Ur-Nanshe, the chief priest and king of the south Mesopotamian city-state of Lagash c.2520 BC helping to bring mud bricks to the building site and then commemorate the opening of a temple of Ningirsu, the patron god of his city.

Dressed in a tufted woolen skirt called ‘kaunakes’, Ur-Nanshe, is accompanied by his wife and sons as well as high officials, each one identified by his name written on his garment.

The king was the founder and the ruler of the 1st Dynasty of Lagash, a strong dynasty that ruled for nearly two centuries over Lagash, according to the cuneiform inscription engraved on the background of the slab.

Ancient City Of Adab That Flourished In North Sumer

The lower register illustrates the king of Lagash seated at a ritual banquet enjoying a drink and again surrounded by his sons. Of the 120 slabs of this kind that have been discovered, mostly in the large cities of the Sumerian cultural area, this is one (H 0.40 m; W 0.47 m) was excavated at the ancient city of Girsu, the religious center for the state. 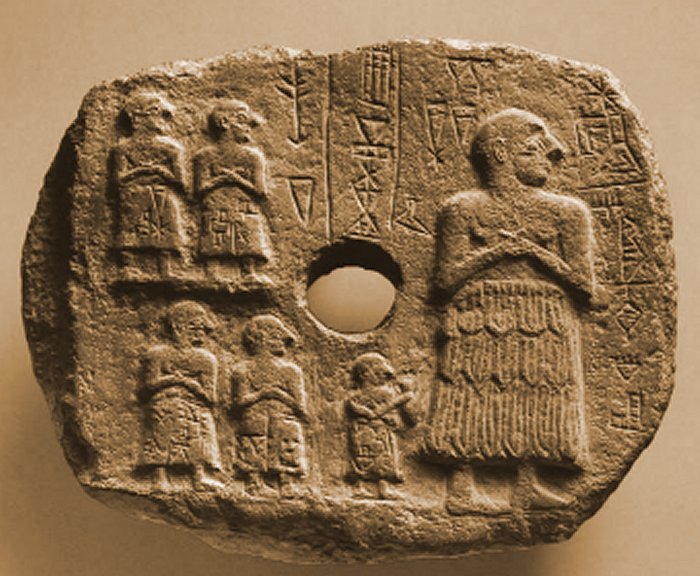 This relief commemorates the construction by Ur-Nanshe of a temple dedicated to Ningirsu, tutelary god of the city of Lagash. Image credit: Metropolitan Museum of Art, New York

This above relief was created to commemorate the construction by Ur-Nanshe of a temple dedicated to Ningirsu, a son of Enlil and the true true monarch and the main deity of the city of Girsu. To build a temple for the city’s protective deities was one of the most important duties of the ruler in Sumer. Ur-Nanshe built a temple to Ningirsu and so did Gudea as Ningirsu was his personal god.

To the left of the perforation on this plaque, there are four men who like the king Ur-Nanshe clasp their hands at their chests and this gesture gives an expression of worship.

The small figure depicted behind the king is Anita, the cupbearer, who holds a vase used for libations. On the same ground line as Ur-Nanshe, stands  Akurgal and according to the inscription on this relief plaque, he is the son and successor to Ur-Nanshe. Above Akurgal there is another man, Lugalezen, yet another son of Ur-Nanshe. Other figures are probably the king’s relatives or high officials.

According to some archaeological evidence, ancient  city of Girsu is now modern Tello (Telloh),  located between the Tigris and Euphrates, approximately 20-25 kilometers north-northwest of Lagash in southern Mesopotamia (now southern Iraq). Girsu was then the capital of the city-state of Lagash, whose  wealth was largely due to its location on the road that led to the rich plain of Susa and from there to the Iranian plateau.

Metropolitan Museum of Art, Art of the First Cities