A. Sutherland - AncientPages.com - Lyman Lake petroglyphs can be found in Lyman Lake State Park, Arizona. Ancient rock art images are etched into boulders; they are numerous signs and symbols were left by ancients passing the area.

Most of the Lyman Lake rock art was created by pecking and no pictographs (paintings on rock) were found in the area. There are depictions of specific animals, masked figures, and a wide variety of geometric shapes. 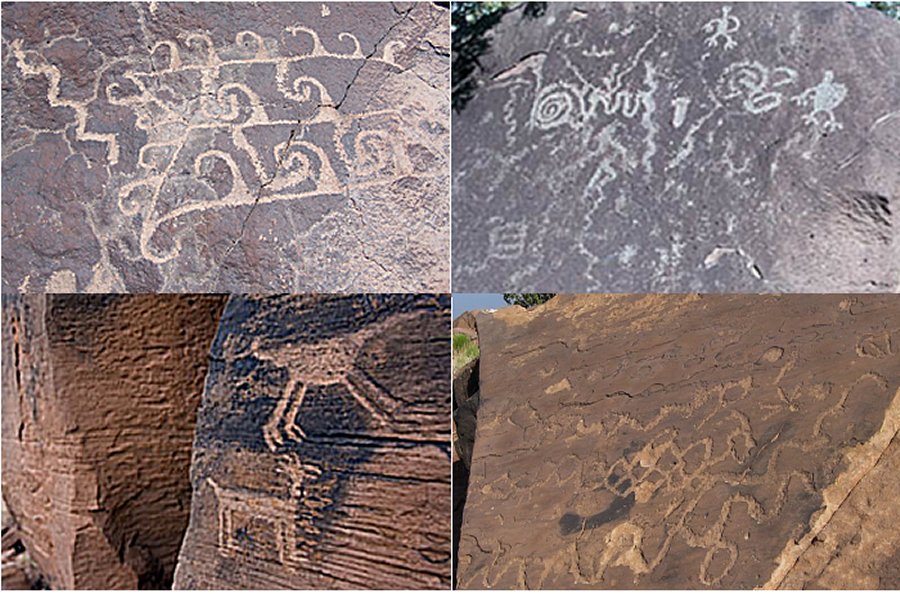 Hopi people interpret many of the petroglyphs in the Park as records of the migrations of their ancestors through this area. In many cases, the designs are associated with particular clans and events that took place during their migrations; others are clan symbols. Credits: Azcentral.com/Arizona State Parks

Archaeologists believe that the diversity of petroglyph styles indicates that more than one prehistoric culture made this rock art, but there is also a possibility that the style used by one culture changed through time.

The earliest petroglyphs in the Park are most probably dated from the Archaic (6000 BC to AD 300) and Basketmaker (from about AD 300 to 700) periods. Most of the petroglyphs date to the Pueblo periods (AD 700 through 1400), with the majority created during the final three centuries of
prehistoric occupation. Most recently, some archaeologists have begun to see petroglyphs as products of shamanistic rituals.

At Ultimate  Rock, there is a large petroglyph-covered boulder but one of the most famous rock art in the area of Lyman Lake, Arizona is Kokopelli  - a flute player. There are many stories about Kokopelli and he was not only a trickster god but also a fertility god, healer, and wonderful storyteller.

The Hopi were familiar with Kokopelli and he is mentioned in their migration and emergence account. According to the Hopi legend, when their people emerged into the Fourth World (our current world) they encountered an eagle that shot an arrow into insects that carried the power of heat. 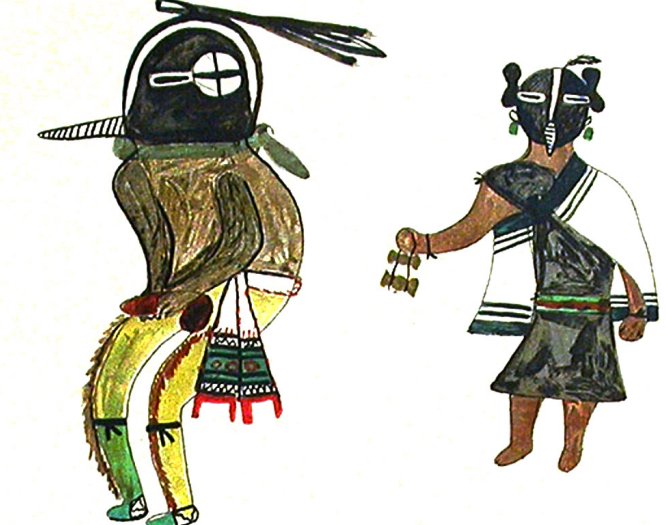 Kokopelli and Kokopelli Mana as depicted by the Hopi. Jesse Walter Fewkes, Hopi katcinas drawn by native artists, 1903 via Wikipedia

These insects known as máhus were not seriously harmed because as soon as they started to play on their flute, their bodies healed. The Hopi were accompanied by the two máhus on their migration.

One of these insects were called Kókopilau (kóko meaning “wood” and pilau meaning “hump”) because he looked like wood. He played on his flute and carried a bag of seed which he scarred across the lands. The wonderful music of his flute made the seeds grow. 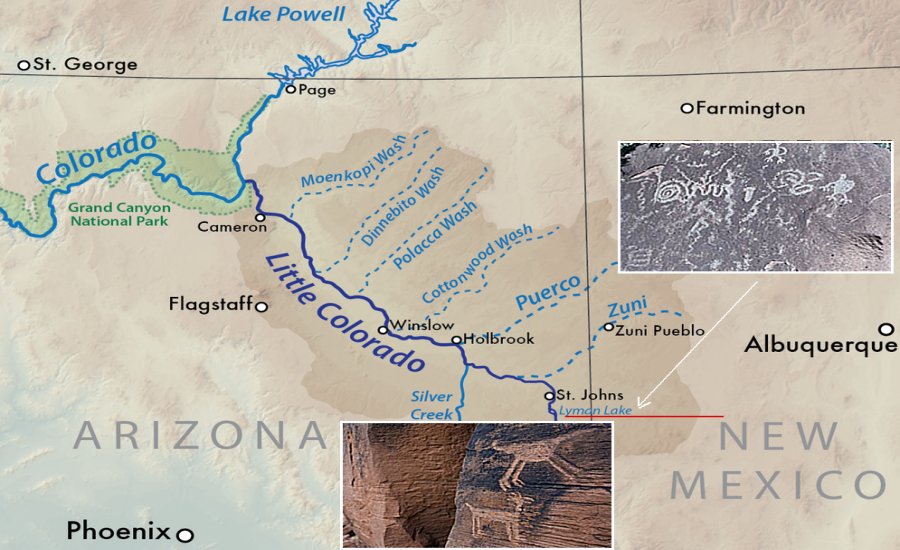 The prehistoric inhabitants of the upper Little Colorado River drainage left a rich material record of their time in the valley.

Some archaeologists associate the Lyman Lake rock art with shamanic rituals, but neither the Arizona State University's archaeologists nor the Hopi Indians agree with this theory. The ruined buildings, artifacts, and petroglyphs (“rock art”) provide the scientific evidence that permits archaeologists to understand the area’s history.

The pueblo ruins were built by ancestors of the Hopi Indians, who see the abandoned houses, broken pottery fragments, and markings on the rocks as a record left by their ancestors during the migrations described in Hopi oral tradition. 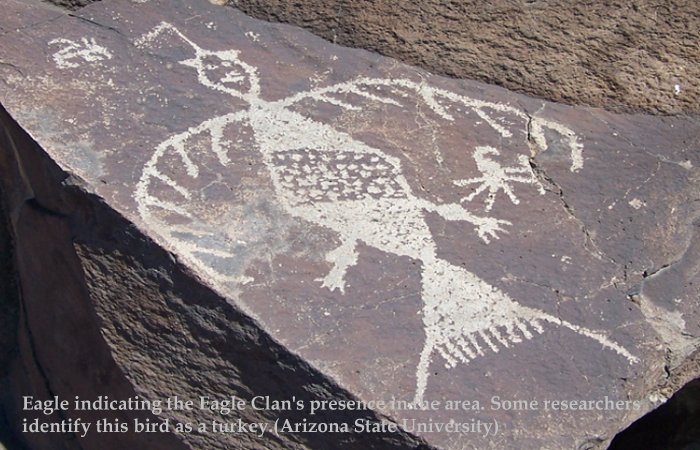 At Hopi, each clan has a narrative of its own history, from emergence, through migration, to eventual settlement on the Hopi mesas. Photo: Glyph Hunter

Created as an irrigation reservoir by damming the Little Colorado River, Lyman Lake State Park contains a number of pueblo ruins and rock art sites. Both Rattlesnake Point Pueblo and the Lyman Lake rock art site are important places for Hopi people. Hopi people consider these sites as homes of their ancestors during their migrations and the petroglyphs are these ancient people's signs. 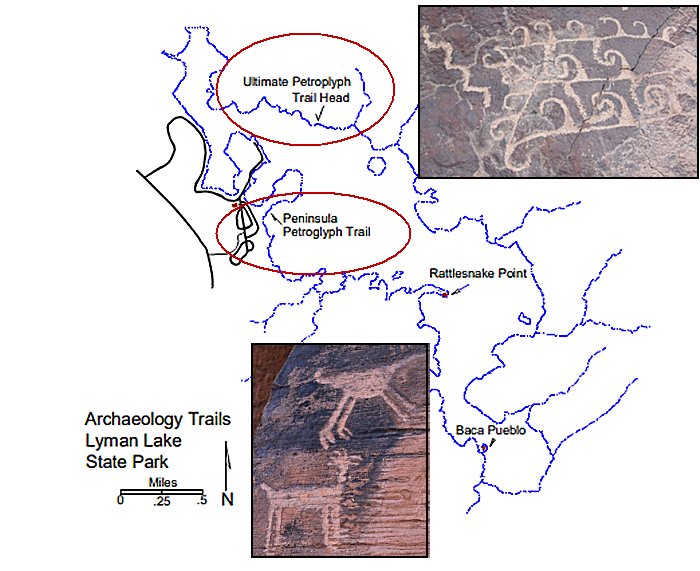 In many cases, the designs are associated with particular clans and events that took place during their
migrations; others are clan symbols.

Slifer D. Kokopelli: The Magic, Mirth, and Mischief of an Ancient Symbol