A. Sutherland - AncientPages.com - Mount Nemrut is an awe-inspiring and enigmatic place located on one of the highest peaks of the Eastern Taurus mountain range,  at an altitude of over 2,000 m above sea level, in south-east Turkey.

We know this ancient place as Nemrut Dagi - the Hierotheseion (temple-tomb and the house of the gods) built by the late Hellenistic King Antiochos I of Commagene (69-34 B.C.), who dedicated it to himself. 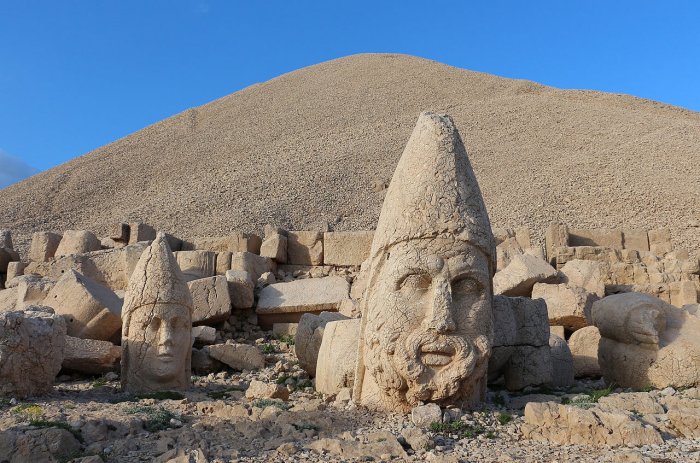 The unique mountain top shrine was completely unknown to all until its discovery in 1881 by German engineer Karl Sester. At the time of the discovery, the megalithic statues were said to be intact. Archaeological excavations began for the first time in 1953 when the American School of Oriental Research conducted precise surveys of the site.

With a diameter of 145 m, the 50 m high funerary mound of stone chips is surrounded on three sides by terraces to the east, west and north directions. Two separate antique processional routes radiate from the east and west terraces.

Antiochus I's sanctuary is flanked by huge statues 8-9 m (26-30 ft) high of himself, two lions, two eagles and various Greek, Armenian, and Iranian gods, such as Vahagn-Hercules, Aramazd-Zeus or Oromasdes (associated with the Iranian god Ahura Mazda), Bakht-Tyche, and Mihr-Apollo-Mithras. 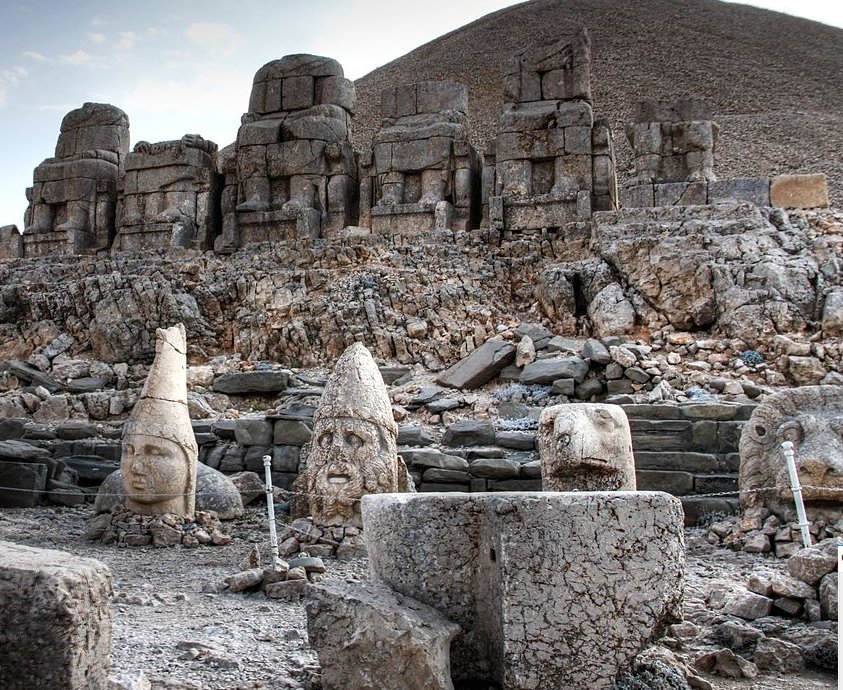 These statues were once seated, with names of each god inscribed on them. Later, the heads of the statues have been removed from their bodies and most likely deliberately damaged (especially their noses). Today they are found scattered throughout the site but they have never been restored to their original locations. Additionally, after numerous earthquakes and devastation, the stone heads that look as if they have been cut off from the trunk.

The site also preserves stone slabs with bas-relief figures that are thought to have formed a large frieze. These slabs display the ancestors of Antiochus, who included Armenians, Greeks, and Persians. The Hierotheseion of Antiochos I is one of the most ambitious constructions of the Hellenistic period.

A highly developed technology was used to build the colossal statues and stelae, the equal of which has not been found anywhere else for this period. The syncretism of its pantheon and the lineage of its kings, which can be traced back through two sets of legends, Greek and Persian, is evidence of the dual origin of this kingdom's culture.

Is There A Treasure Hidden On The Top Of Mount Nemrut?

Are ancient secrets hidden inside the mountain? Archaeologists believe that the mound hides the tomb of King Antioch, but they are not entirely convinced. In addition, there are numerous legends about the treasure hidden on the top of the mountain.

However, the truth regarding both the tomb and possible treasures has not been revealed during archaeological studies lasting for more than half a century. Even the use of dynamite, which only lowered the mound by 5 m, did not reveal anything of value.

Archaeologists have found an ancient glass shaft, which according to experts indicates a unique knowledge of advanced astronomy of people of that period. It runs towards the slope at an angle of 35 degrees and is about 150 meters long. Computer analysis has shown that two days of the year, the sun’s rays would illuminate the bottom of the shaft - once when in line with the constellation of Leo and another time when in line with Orion.

The ancient kingdom of Kommagene (Commagene) - a small mountain kingdom located in what was Asia Minor, in Eastern Anatolia - was relatively short-lived but it survived as an independent kingdom until 72 AD when it was incorporated in the Roman Empire. 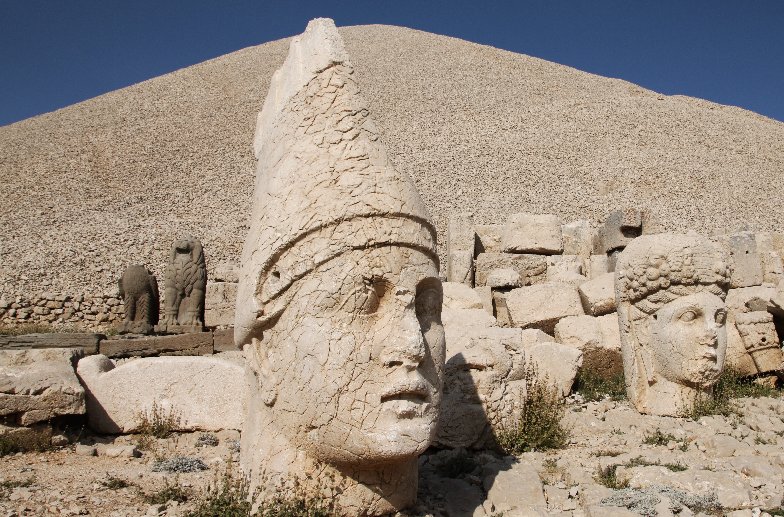 The magnificent Nemrut statues are located within a first-degree earthquake zone very close to the East Anatolian Fault, which is seismically active.  Therefore, the tumulus, statues, and stelae are vulnerable to earthquakes. The height of the tumulus has been reduced from its estimated original 60 m due to weathering, previous uncontrolled research investigations and climbing by visitors.

The first version of this article was originally published on August 6, 2015

Tags:Hierotheseion of Antiochos I, kingdom of Commagene, Mount Nemrut, Throne Of The Gods, Turkey