A. Sutherland - AncientPages.com - One of the most important archaeological discoveries in Oklahoma and the entire North America was the Spiro Mounds Site. The people of Spiro Mounds once ruled most of present-day America. 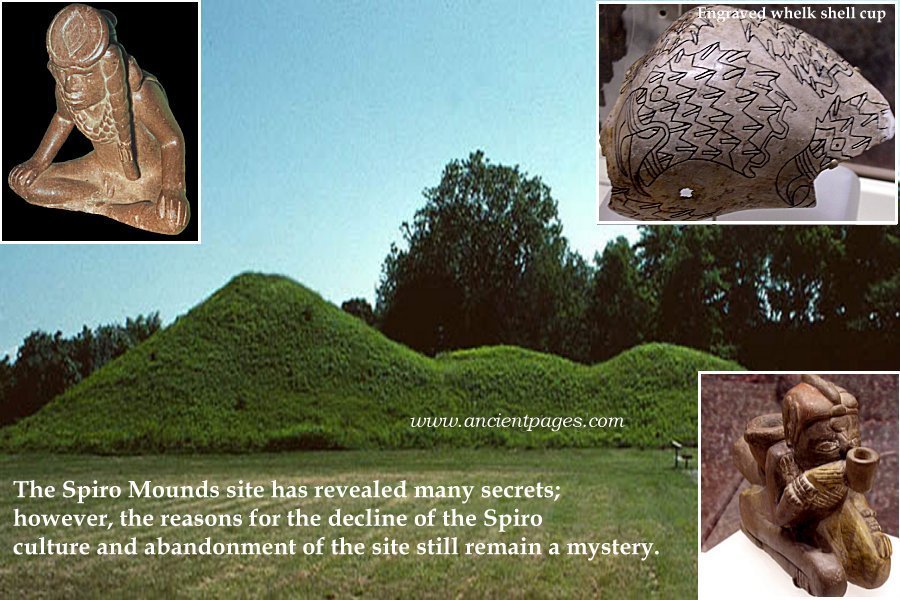 The site, which lies near the Arkansas River seven miles north of the town of Spiro, was occupied by various groups of people who camped on or near the Spiro area for at least 8000 years.

From 850 to 1450 AD, the location was permanently inhabited by Caddoan speaking Indians (the modern Kichai Wichita, Arikara Caddo, and Pawnee.).

The settlement began as a small farming village and became the intriguing, important and famous seat of the ancient Mississippian culture, in what later became the United States. 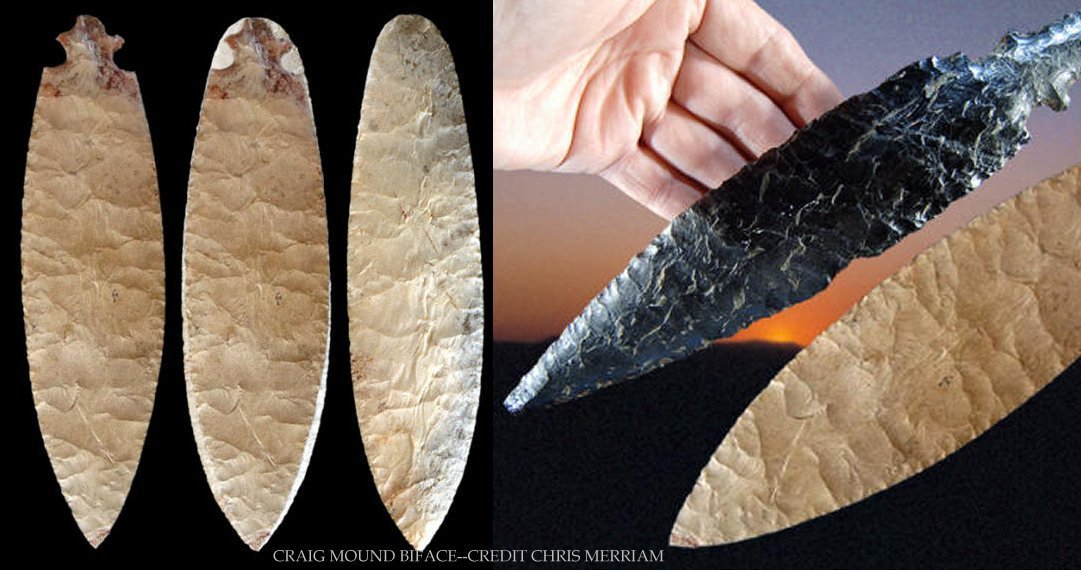 These people developed horticulture, elaborate ceremonies, mound-building and an iconographic writing system with over 60 different tribes, stretching from the Rockies to the Virginia Coast and from the Gulf Coast to the Great Lakes.

Buhl Woman Of Idaho: One Of The Oldest Skeletons In North America

Etowah Indian Mounds: A Legacy Of The Ancient Mississippian Culture

They built large, complex earthworks, which included eleven platform mounds and one burial mound in an 80-acre (0.32 km2) area on the south bank of the Arkansas River. The central part of the site were the nine mounds surrounding an oval, large and leveled central ceremonial plaza, which was used for important religious rituals. 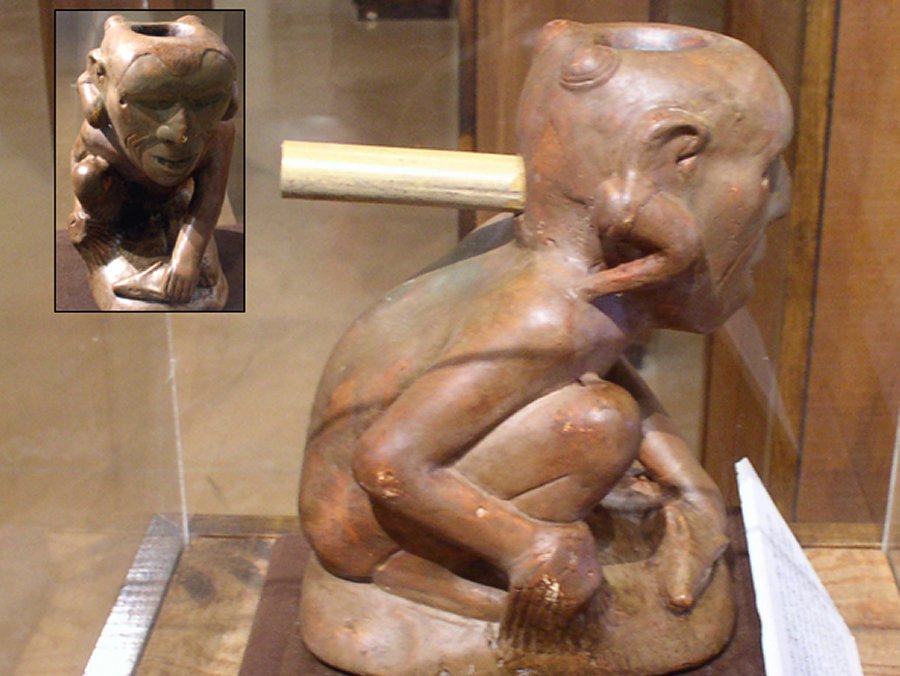 Some of the most beautiful stone effigy pipes found at Spiro, including the famous "Grizzly Man" or "Kneeling Rattler" pipe, have shown they came from Cahokia, based on the material from which they were made. Image via Wikipedia

The largest platform mound - Brown Mound – served as a place of complex rituals, associated with the deaths and burials of Spiro's rulers. The Spiro inhabitants lived in a village closed to the ceremonial plaza and additionally, more than twenty similar villages were situated within five miles distance from the Spiro center and many other village sites – all representing the same culture – were found within a radius of 100 miles (160 km) away.

They created an important religious and political center of about 10,000 people that thrived along the Mississippi River and influenced the entire Southeast. The Spiro Mound center declined and was eventually abandoned by 1450 AD, although the city was continuously occupied for about 150 years. 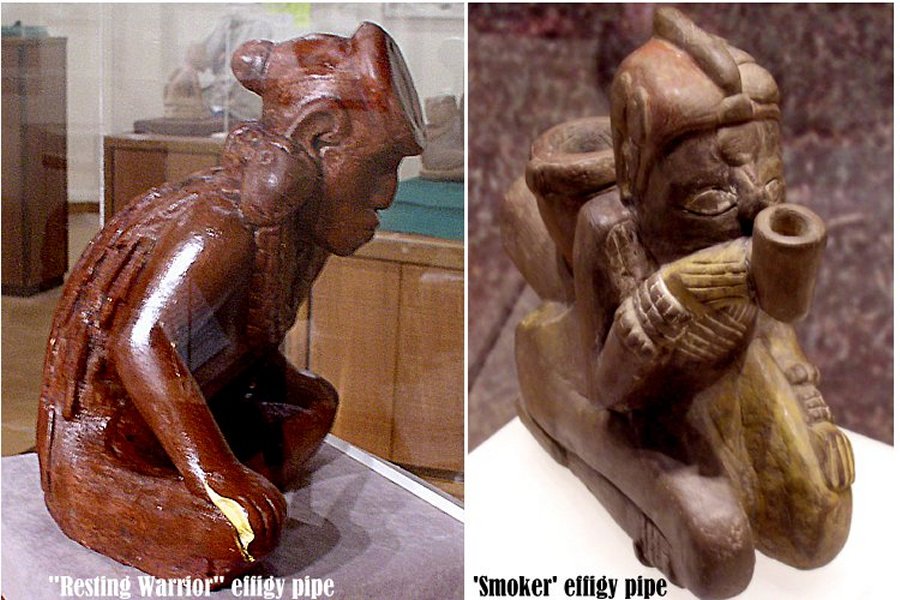 In 1936, archeologists from the University of Oklahoma were able to excavate as much as possible from the Spiro site, which was exposed to major damage due to the looting of its artifacts.

In a cavity of the Craig Mound ("The Spiro Mound"), the only burial mound of the Spiro site, archaeologists excavated many artifacts made of wood, conch shell, and copper, including basketry, vegetal and animal fibers, woven fabric of lace, fur, and feathers.

The Spiro Mounds site has revealed many secrets; however, the reasons for the decline of the Spiro culture and abandonment of the site still remain a mystery.