A. Sutherland - AncientPages.com - What makes the Tarascans an intriguing pre-Columbian civilization?

The Tarascans, well-known for their outstanding musical and artistic abilities, are first of all, famous for their highly advanced metallurgic technology that existed prior to the coming of the Spanish. Their knowledge in metalsmithing was considered much more superior to that of the Aztecs. 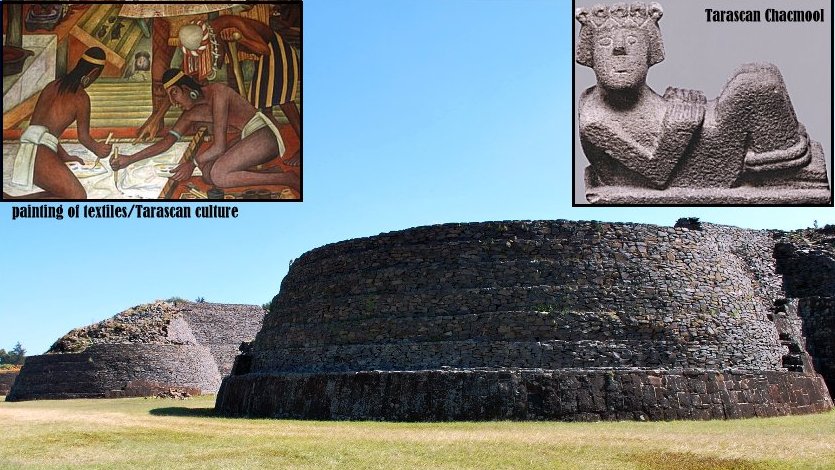 Called by the Spanish, ‘Tarascans’, these indigenous people occupied most of Michoacán's, a state in west-central Mexico that extends to as far as the Pacific Ocean. They flourished from 1100 to 1530. Today, they live mostly around lakes Pátzcuaro and Cuitzeo, in the highlands of central Michoacan.

Their pre-Columbian civilization of Mesoamerica was possibly established as early as the 10th century, but it is commonly agreed that it happened in the 14th century. Their capital - center of politics, culture and economy - was Tzintzuntzan ("Place of Hummingbirds).

They built a powerful kingdom, next in size to the Aztec Empire and the Tarascan brave warriors managed to successfully drive back the attacking Aztecs, who made repeated attempts to conquer them

Among the ruins of Tintzuntzan, there are traces of pyramidal constructions built on a large platform; they cover an area of more than 6 square kilometers.

A typical Tarascan building was the Yácata, used as both a mortuary and a dwelling. The structure consists of three parts whose ground plan is shaped more or less like a capital T: a rectangular stepped pyramid, a round stepped pyramid that is placed at the mid-point of the rectangle, and a stepped passageway which joins the round structure to the rectangle.

"The mound is built of stones, without mortar, in the shape of a 'T,' each arm about 50 feet long and thirty-two feet high. The western arm terminates in a circular construction, a kind of knob. The sides all rise in regular steps from the ground, and the level surface on top of the arms is only six feet wide, while the base is twenty feet broad. These encircling steps make the monument singularly symmetrical and graceful," as described by Carl Lumholtz (1851 – 922), Norwegian explorer and ethnographer. 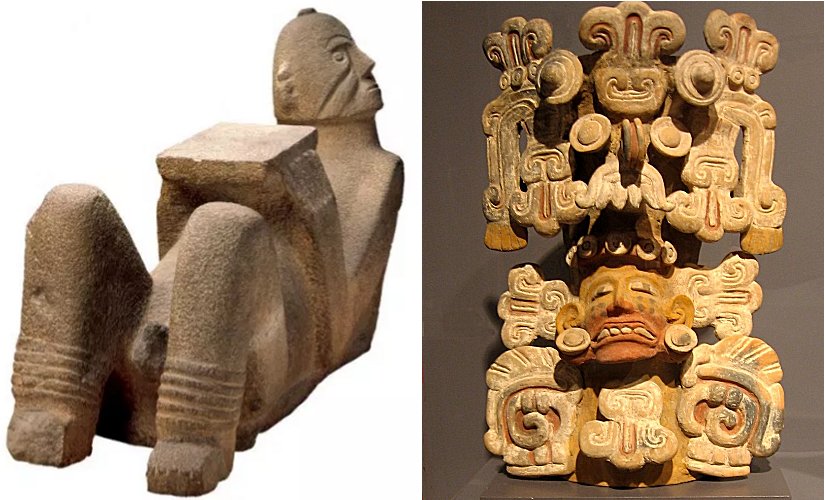 Left: Tarascan figure. Right: An incense burner from the Tarascan culture, showing a deity with a "Tlaloc headdress", 1350 - 1521 AD, from the Snite Museum of Art via wikipedia

These people were not inventors but rather borrowers, strongly influenced by neighbors such as Tula, Ecuador and Peru. They used an intoxicating drink, domesticated turkey, grew cotton, built stone houses with thatched roofs and played pelota, a game also popular among the Aztecs.

Hunting and fishing were a part of the Tarascan culture but archaeological digs revealed that the society was more agrarian. People were also involved in making of hollowed out canoes, weaving and skin clothing.

Many have wondered where did the name ‘Tarascan’ come from? This name (in Spanish "tarasco") comes from the word "tarascue" in the Purépecha language, and means "father-in-law" or "son-in-law". The Spanish took it as their name, for reasons that have been attributed to many different legends.

Tarascan Language And Their Roots

Not much is known about their ancestors. Unlike the Aztecs, the Tarascans left no personal documentary histories, and they had no missionary-historian-defender ready to write down their story as it might have been dictated at the time of conquest.

The best source of historical information is the ‘Relación de Michoacán’ compiled by an anonymous Spanish Franciscan friar around 1538. It is a document devoted to the Tarascans’ government, tradititions and religious rituals. 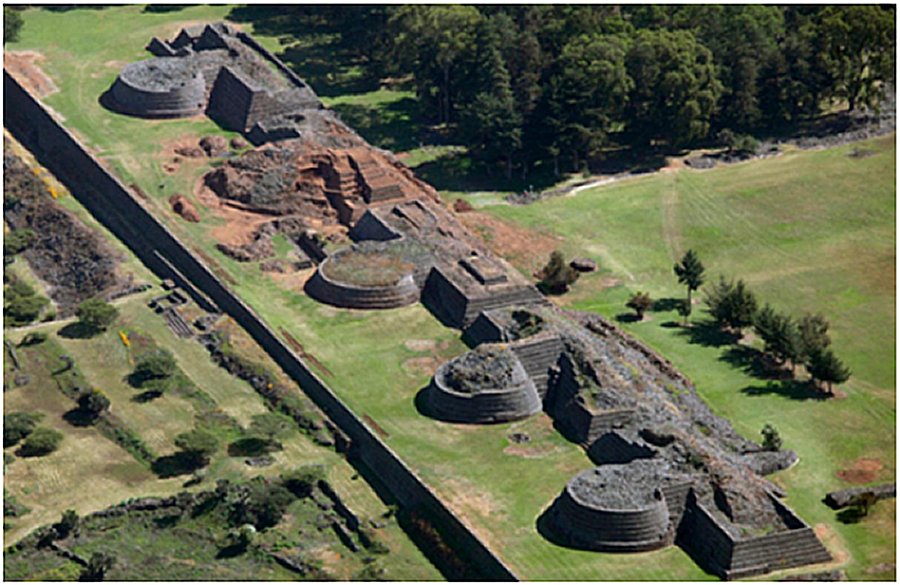 Among the ruins of Tintzuntzan, there are traces of pyramidal constructions built on a large platform; they cover n area of more than 6 square kilometers

It is believed that their language is distantly related to the Zuñi Indians' language from New Mexico, and to the Quechua-Aymara language of some South American Indian people.

However, no evidence of written language has been uncovered. Instead it seems, they defined and recorded history in artifacts that were placed in graves.

As a measurement of time, the Tarascans used both the eighteen month and the 240 day calendars.

Like the Aztecs, the Tarascans had many deities, each with their own attributes, sacred colors, associations with animals, and calendrical days.

The most ancient and revered was Curicaueri, the fire god. A Tarascan origin story tells how Curicaueri and his brother gods founded the settlements around Lake Pátzcuaro. The pre-Columbian Tarascans believed that they were descendants of Curicaueri.

The connection with ancestor gods was traditionally maintained in rituals and ceremonial dances.

Many traditions live on, including the "Jimbani Uexurhina" or new year that is celebrated on February 1. The celebration has traditional indigenous and Catholic elements. The community lights a fire called the chijpiri jimbani or "new fire" as part of a ceremony that honors the four elements. Mass is also celebrated in the Purhépecha language.'

Skills In Metallurgy And Trade With The Aztecs

Their lands were rich in metal ores and the Tarascans were skilled metallurgists of pre-Conquest Mexico; their knowledge in metalsmithing was considered much more superior to that of the Aztecs, and yet, the Aztecs used to trade with them, mainly for weapons and metal tools. They were  never conquered by the Aztecs.

Long before the Spaniards arrived, the Tarascans used processes of metallurgy which were advanced and complex methods. They hammered, tempered, welded, made alloys, did castings and filigreeing, annealed, soldered and plated also using gold and silver.

Their craftsmen practiced their craft in gold, silver and copper and as Robert West wrote in 'Early Silver Mining in New Spain, 1531-1555',

"…Copper-silver alloy artifacts found in the palaces and graves of Tzintzuntzan include rodelas, armlets, bracelets and cups. Copper bells made from lost-wax casting were used in religious ceremonies from A.D. 650 to at least 1200. This was followed by copper-gold and copper-silver items such as discs, bracelets, diadems and masks. Other items were made from bronze, including needles, fishhooks, tweezers, axeheads, and awls. The religious national treasures were looted by the Spanish during the Conquest from Lake Patzcuaro graves and storerooms…"

Extraordinary skills of the Tarascans survived generations and even today, these people are widely regarded as coppersmiths.

P. O. Koch, The Aztecs, the Conquistadors, and the Making of Mexican Culture

B. Warren, The Conquest of Michoacán