Ellen Lloyd - AncientPages.com - All across the world, there are still many mysterious ancient scripts, tablets, codes and maps that until this day remain undeciphered.

Multiple attempts to solve the enigma have failed. Many of the world's greatest minds have tried to crack the code and failed, including Charles Dickens and Charles Darwin. Margaret, Countess of Lichfield (1899–1988) claimed that the inscription was a love message, referring to the lines Out Your Own Sweet Vale, Alicia, Vanishes Vanity. Twixt Deity and Man Thou, Shepherdess, The Way, but no source for these words has ever been traced. 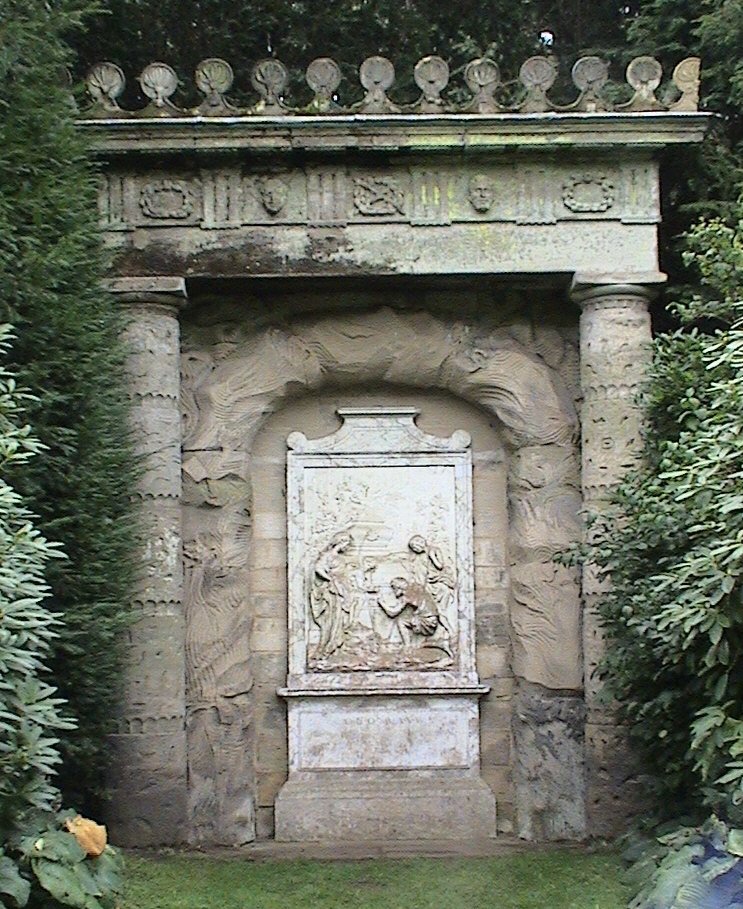 In his book "Uncracked Codes and Ciphers" Vance Gortman mentions that

"Steve Regimbal interprets the letters as standing for a new Latin translation of the phrase "Vanity of vanities, saith the preacher; all is vanity." (Ecclesiastes 12:8), namely Orator Ut Omnia Sunt Vanitas Ait Vanitas Vanitatum. He has speculated that the phrase may be the source of the earlier inscription "OMNIA VANITAS" which may have been carved on an alcove at the estate of one of Thomas Anson's associates, George Lyttleton, " and "former NSA linguist Keith Massey interprets the letters as an initialism for the Latin phrase Oro Ut Omnes Sequantur Viam Ad Veram Vitam ("I pray that all may follow the Way to True Life") in reference to the Biblical verse John 14:6, Ego sum Via et Veritas et Vita ("I am the Way, the Truth and the Life").

Many have tried to solve the puzzle of the 10-letter inscription - DOUOSVAVVM, but in vain.

For a long time, the Shepherd's Monument in Staffordshire, England and its cryptic inscription was considered to be a great puzzle to all who tried to solve the enigma of the mysterious letter combination. The code inscribed on the Shepherd's Monument has eluded decipherment for over 250 years. Those of a romantic disposition believed it to be a coded message of the kind used by the Knights Templar and their successors to point to the whereabouts of the Holy Grail or some other religious relic. Others believed it to be a private affirmation of love.

The monument located at the grounds of Shugborough Hall in Staffordshire, England, was commissioned by Thomas Anson, paid for by his brother, Admiral George Anson, and fashioned by the Flemish sculptor Peter Scheemakers.

It is set within a stone arch which appears like an entrance to a cave, carved to look natural and wild. It contains a marble bas-relief copy of Poussin's painting "The Shepherds of Arcadia" and a carved inscription below it.

The relief shows a woman and three shepherds, two of whom are pointing to a tomb. On the tomb is carved the Latin text ET IN ARCADIA EGO ("I am also in Arcadia" or "I am, even in Arcadia").

The carving displays a number of small alterations from the original painting.

Notably, the letters to which the shepherds are pointing have been changed, and an extra sarcophagus has been placed on top of the main tomb. Also, the relief sculpture is a mirror (or horizontally reversed) image of the painting. Above the Poussin scene are two stone heads, one of which bears a strong likeness to the goat-horned Greek god Pan.

Below it, an unknown craftsman carved the mysterious inscription, a sequence of ten letters that has never been satisfactorily explained, and has been called one of the world's top uncracked cipher texts. 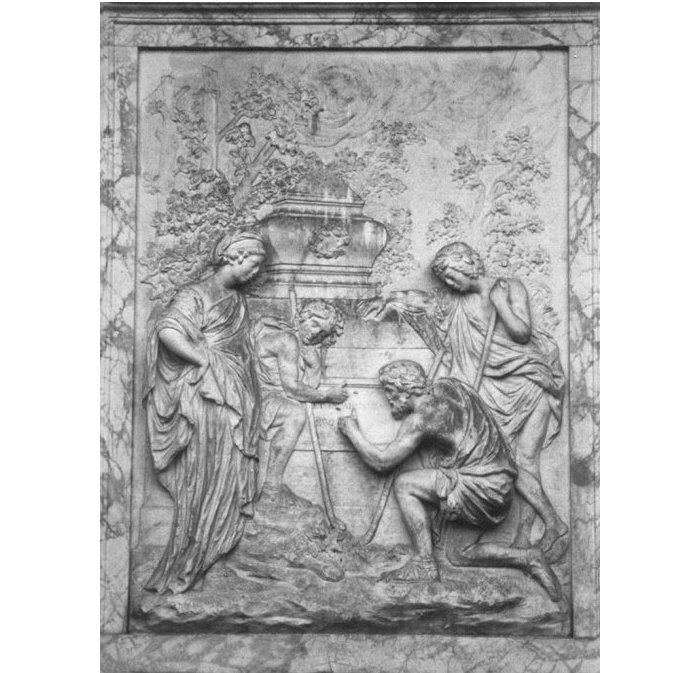 Also, the relief sculpture is a mirror (or horizontally reversed) image of the painting. Above the Poussin scene are two stone heads, one of which bears a strong likeness to the goat-horned Greek god Pan.

According to the Telegraph, "the Shugborough mystery arose in the years between 1748 and 1758 when the monument containing the code was installed. The estate was the home of the Anson family, whose most illustrious member was George Anson, one of Britain's greatest admirals.

In 1740, Anson led a fleet of seven ships on an epic circumnavigation, the highlight of which was the seizure of the Spanish bullion ship Nuestra Senora de Cavadonga." Anson's share of the booty ensured him a happy retirement and the expansion of Shugborough, the home of his brother Thomas. The estate is now owned by the National Trust but still partially occupied by his descendant, the Earl of Lichfield.

The Anson brothers were thought to have been members of secret societies, which abounded at the time.

One, the Priory of Sion, was regarded as a successor of the medieval Knights Templar, persecuted as heretics for their belief that Christ was not divine. Legend had it that they were the guardians of relics recovered from the Holy Land, including the Holy Grail, the cup used by Christ at the Last Supper.

The monument carried a relief based on a painting by Poussin, Et in Arcadia Ego. The artist was thought to be a member of the Templars. The monument carries the title of the painting, and below are the 10 letters with the D at the beginning and the M at the end, slightly lowered.

Mystery Of Count St. Germain – The Ascended Master – The Immortal One

Recently, an American formerly involved with the military used the painting as a key to unlock the code.

Using a series of grids, he came up with the words Jesus H Defy, interpreting the H as chi, the Greek letter used to denote the Messiah.

Result: a Templar message defying the description of Jesus as the Son of God. The American, who refuses to be identified, believes other messages reside in the matrix. GCHQ endorsed his methodology, but not necessarily his conclusions.

Richard Kemp, the general manager of the Shugborough Estate, said: "This confirms a link with the Templars. It's a very exciting discovery that confirms what was always rumoured to be the case." And with that he took off in search of the Grail.

Some might think the "discovery" is less than convincing. But Murlyn Hakon, of Bletchley Park, said: "There is something there."

However, there was another explanation.

Sheila Lawn, 81, a code-breaker at Bletchley during the war, favoured a solution offered by another team. They say the eight central letters, represent a Latin poem to a departed loved one, which goes: "Optima Uxoris Optima Sororis Viduus Amantissimus Vovit Virtutibus".

The lines are translated as: "Best Wife, Best Sister, Widower Most Loving Vows Virtuously". She said: "I believe in the simple approach, and this appears to be an elegant solution."

Still, there is a good reason to suppose that the Shepherds Monument was not there in 1748.

Philip Yorke, Lady Elizabeth Anson's brother and husband of Jemima, Marchioness Grey, visited in August 1763 and wrote to his father, Lord Hardwicke describing, as he writes, the "many embellishments since I saw it (Shugborough) in 1748."

"I should not omit to mention the Bas Relief from Poussin's Arcadian Picture, the most elegant Piece of modern sculpture I ever beheld & does great honour to Scheemaker's chisel…"

Also, recent research has found that the first known mention of the monument is in a letter from Lady Elizabeth Anson, the wife of Admiral George Anson, to her brother-in-law Thomas in 1756. This means that the monument must have been constructed on or before 1756.

This limits the possible date of the monument's construction from between 1749 to 1756. These years are important as it is during these years that one very enigmatic figure entered the lives of the Anson family who could have been the reason for the construction of the monument. This person is none other than the Count of St. Germain.