Ellen Lloyd - AncientPages.com - We find ancient doomsday prophecies in several sacred books, scripts, and legends worldwide. Some of these prophecies challenge our beliefs and trust in the future. Will the world as we know it end completely? Will humanity cease to exist? Will our race be replaced with a new one?

The Native American Rainbow Prophecy offers an intriguing and different view of the future world.

The rainbow was a very important symbol in many ancient cultures. Native America Indians regarded the rainbow as a sign of the great mystery and the future. 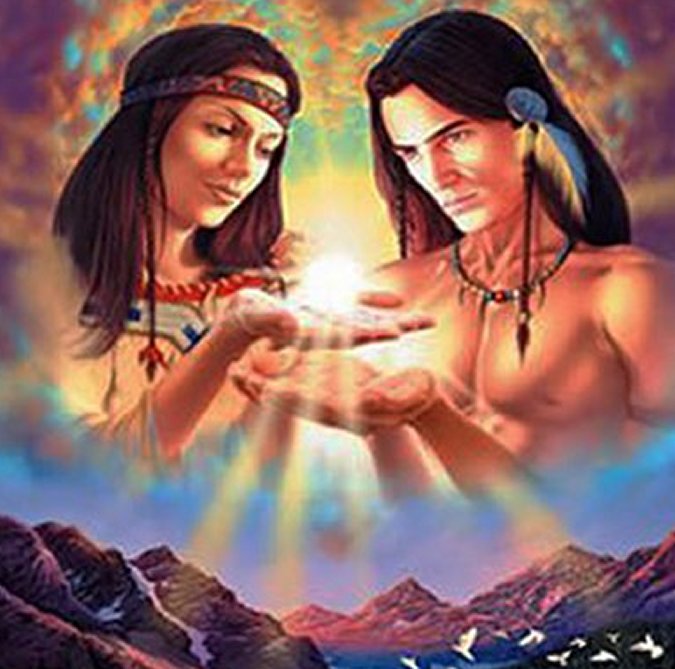 Prophesies and stories of many nations, from the Hopi and Zuni in the Southwest to the Cherokee in the Southeast, from the Cree in the far north, the great Sioux nations of the plains, to the Mayan people of the far south, the Rainbow was a focal point of spiritual belief. According to Native American beliefs, under the rainbow symbol, all races and religions will unite to spread the wisdom of living in harmony with each other and with all creatures.

"As Native Americans, we believe the Rainbow is a sign from the Spirit in all things. It is a sign of the union of all people, like one big family. The unity of all humanity, many tribes and peoples, is essential, " Late Thomas Banyacya, Spokesman, Hopi traditional elders, Hotevilla said

The Cree, Hopi and Sioux Indians speak about mighty Rainbow Warriors that will inhabit our planet in the future and they will come in time of the great awakening.

A Native American prophecy tells us that "when the earth is ravaged and the animals are dying, a new tribe of people shall come unto the earth from many colors, classes, creeds and who by their actions and deeds shall make the earth green again.

They will be known as the Warriors of the Rainbow." 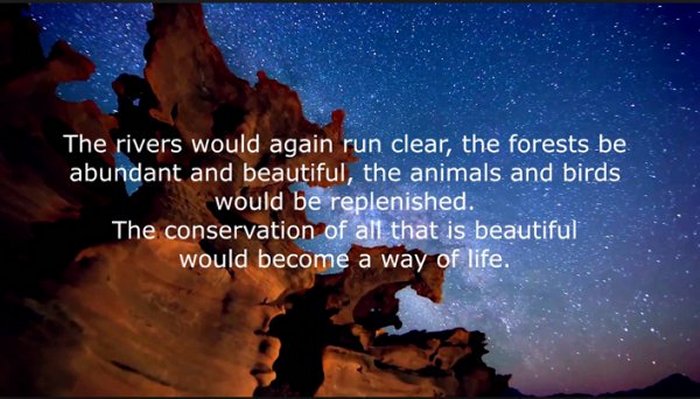 The Cree tribe tells of an old woman named "Eyes of Fire", who prophesied that one day, because of the white mans' greed, there would come a time, when the fish would die in the streams, the birds would fall from the air, the waters would be blackened, and the trees would no longer be, mankind as we would know it would all but cease to exist.

There would come a time when the "keepers of the legend, stories, culture rituals, and myths, and all the Ancient Tribal Customs" would be needed to restore us to health, making the earth green again. They would be mankind's key to survival, they were the "Warriors of the Rainbow". There would come a day of awakening when all the peoples of all the tribes would form a New World of Justice, Peace, Freedom and recognition of the Great Spirit.

According to Manataka American Indian Council, "the "Warriors of the Rainbow" would spread these messages and teach all peoples of the Earth or "Elohi". They would teach them how to live the "Way of the Great Spirit." They would tell them of how the world today has turned away from the Great Spirit and that is why our Earth is "Sick".

These Warriors would give the people principles or rules to follow to make their path light with the world. These principles would be those of the Ancient Tribes. The Warriors of the Rainbow would teach the people of the ancient practices of Unity, Love and Understanding. They would teach of Harmony among people in all four corners of the Earth. 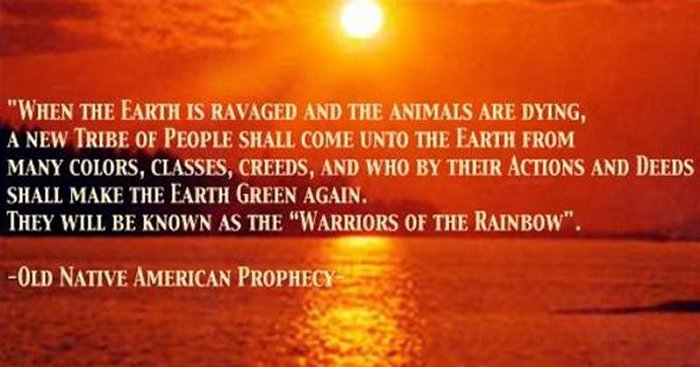 Like the Ancient Tribes, they would teach the peoples how to pray to the Great Spirit with love that flows like the beautiful mountain stream and flows along the path to the ocean of life. Once again, they would be able to feel joy in solitude and in councils. They would be free of petty jealousies and love all mankind as their brothers, regardless of color, race or religion. They would feel happiness enter their hearts, and become as one with the entire human race. Their hearts would be pure and radiate warmth, understanding and respect for all mankind, Nature and the Great Spirit.

They would once again fill their minds, hearts, souls, and deeds with the purest of thoughts. They would seek the beauty of the Master of Life - the Great Spirit! They would find strength and beauty in prayer and the solitude of life.

Their children would once again be able to run free and enjoy the treasures of Nature and Mother Earth. Free from the fears of toxins and destruction, wrought by the Yo-ne-gi and his practices of greed. The rivers would again run clear, the forests be abundant and beautiful, the animals and birds would be replenished. The powers of the plants and animals would again be respected and conservation of all that is beautiful would become a way of life.

The poor, sick and needy would be cared for by their brothers and sisters of the Earth. These practices would again become a part of their daily lives.

The leaders of the people would be chosen in the old way - not by their political party, or who could speak the loudest, boast the most, or by name calling or mud slinging, but by those whose actions spoke the loudest. Those who demonstrated their love, wisdom and courage and those who showed that they could and did work for the good of all, would be chosen as the leaders or Chiefs. They would be chosen by their "quality" and not the amount of money they had obtained.

This certainly sounds like an ideal future, but it is possible to create such a wonderful world? Native American Indians are convinced we have the potential to change and become better people.

"We have the opportunity to build a Rainbow bridge into the Golden Age. But to do this, we must do it together with all the colors of the Rainbow, with all the peoples, all the beings of the world. We who are alive on Earth today are the Rainbow Warriors who face the challenge of building this bridge, "Brooke Medicine Eagle, Daughter of the Rainbow, Crow and Lakota said. 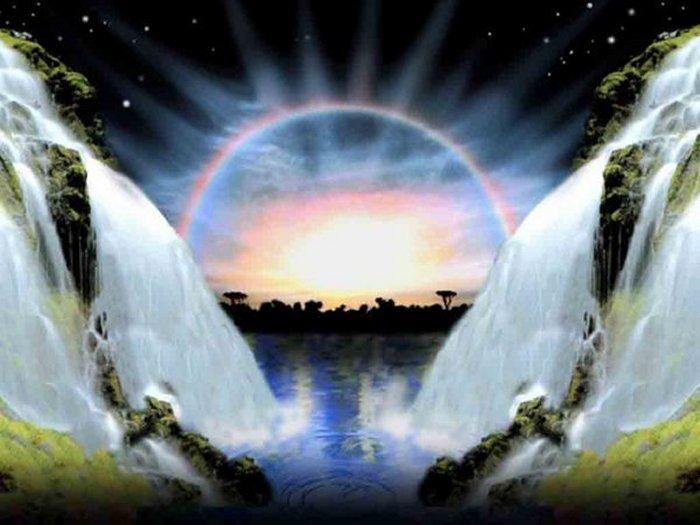 "There is truth in the prophecies of the Rainbow and the Rainbow people. People from all of the Americas will unite with people from all the other nations, and they will realize that we are all Family, brothers and sisters. This is not my personal vision, but the cosmic vision presented by all the elders, a vision that we all share," Don Alejandro Cirilo Perez, Maya Elders Council, Guatemala said.

Many ancient cultures speak of a Golden Age and the changes that we must face. According to Hindu beliefs, we are currently living in the yuga of "Kali," the Goddess of Destruction. The God we worship is now black.

Do the colors merely have a symbolic meaning, or has, in fact, our planet, during every world epoch, been assigned to an extraterrestrial being, a god, whose primary task was controlling and guarding the Earth?

Since these extraterrestrial beings probably have various skin colors, it is only natural that humans would say a white, red, yellow, or black god. Many people believe that we are on the verge of a mass awakening of global consciousness that will usher in a New Global Golden Age for mankind.

Will humanity be able to change and save planet Earth or are we doomed as a race?

Can the Rainbow Warriors save us as the prophecy tells us or will this planet be destroyed and later inhabited by a new race of beings?