A. Sutherland - AncientPages.com - Many people believe there are frightening places on our planet that lead to the underground realms of hell. One such place is located in Stull, a small peaceful, quiet town in Kansas, USA.

Very old legends tell there is something wrong with the collapsed old Evangelical Church and the overgrown cemetery located atop Emmanuel Hill of Stull. It is a place where true evil can be encountered. 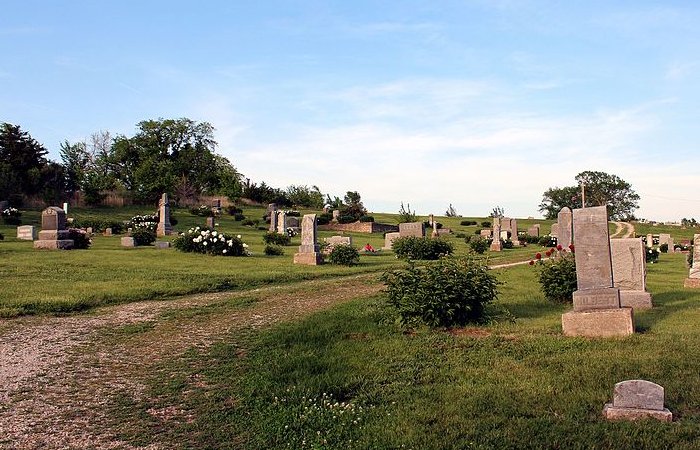 These legends are based on local stories that somewhere within the tiny, run-down Stull cemetery, there are hidden steps that descend directly to the underworld itself. The steps are nearly impossible to find and are covered by a hidden seal that only opens on Halloween and the Spring Equinox. If one does manage to find these steps, they should never venture down them, for it is impossible to ever return.

Is Stull Cemetery A Gateway To Hell?

In Stull’s history, a few strange facts speak to its long reputation of being a cursed area. First, in the early 1900s, a boy was accidentally burned to death by his own father.  A few years later, a man in town was found hanging from a tree.

Both of these took place near a road known as “Devil’s Road,” which appears on old maps of Stull, although it no longer exists today. In short, Stull, Kansas has long been a place of mysterious deaths and associations with the Dark Prince.

Today, mysterious people guard Stull against disturbances.  Stories abound of curious people being terrorized and chased out of Stull by pick up trucks.  Some stories say that these trucks would trail intruders for over twenty miles!

In 1867, a small church was built in limestone on the hillside just above average burial ground known as Stull Cemetery.

The small town of Stull is located just 15 to 20 miles outside of Lawrence and only 13 miles east of Topeka, the capital city of the U.S. state of Kansas.

Less than a hundred tombstones are still there, but a burned-out church practically does not exist anymore…Its old remains simply disappeared one night, and since then, no one was able to give any explanation why it happened.

As a matter of fact, the disappearance of the church's last remaining piece of wall is a true enigma, and so is the bizarre history of Stull's church and neighboring cemetery.

The church has been standing vacant since 1922 and it has been badly damaged by vandalism over the years and by lightning which struck the church and caused a large crack in one of its ancient stone walls.

According to coverage in the local newspaper, the Journal-World, dated March 30, 2002, "the old stone church was mysterious torn down on Friday, March 29, 2002.

A man named Major Weiss, who owns the property, along with two other members of Harvest Hills LLC, (who he declined to name) informed that he did not authorize the abandoned church to be destroyed and hadn't been informed the church would be razed.

Those who live nearby stated that they were also unaware of the demolition.

"The old church at the cemetery near Stull finally met its demise. Landowners aren't yet sure who on Friday demolished the limestone structure, which local legend had purported to be a "gateway to hell..." the local newspaper wrote.

The Holy Bible says that the powers of hell shall not prevail against the church.

More exactly it is written in the Book of Matthew 16:18 that:

"And I also say unto thee, that thou art Peter, and upon this rock I will build my church; and the gates of Hades shall not prevail against it…"

What Kind Of Powers Did Destroy The Rests Of The Small, Today Abandoned Church Of Stull?

Did some fanatics vandalize the old remains of the church long rumored to be some access port leading to hell?

Within the Stull cemetery, there was once an imposingly tall pine tree that stood until 1998, when it was destroyed to dissuade thrill-seekers. Even though the tree was perfectly healthy, it was cut down the day before Halloween. The tall pine tree grew directly through a headstone, splitting it in half.

Local lore held that the tree was used to hang witches before the land was allotted as a memorial ground. Both the church and tree were considered landmarks of evil, which would help lead the way to the mystical steps to hell located nearby.

For over a century, urban legends and other weird and frightening stories have referred to Stull's connection with the Devil and satanic or occult activity.

Did Satanists finally destroy the old church? Are they still active and hold their rituals in the area?

Legends say that the original name of this small town was "Skull." Later, the name was deliberately changed to "Stull" to cover the place's relation to black magic, ghosts, witchcraft, ghosts, and supernatural happenings that, as at least the Catholic Church teaches, have diabolical origins as haunting or possessions.

Popular culture often makes fun of the Devil, but his existence is a complex and very serious subject in reality.

What’s weird around here? That’s a question Mark Moran and Mark Sceurman have asked themselves for years. And it’s exactly their offbeat sense of curiosity that led the duo to create the phenomenal Weird N.J. and the successful series that followed. What’s NOT shockingly odd here: every Weird book has become a bestseller in its region.

Now the weirdness is finally in paperback for the first time! Six titles—including Weird U.S., which covers all 50 states—will reach a fresh audience eager to get these cool collections at a more popular price and smaller size. Plus, there’s an exciting brand-new volume, covering the wonderfully weird state of Louisiana. Read more

Dr. Mark D. Roberts, a Senior Pastor of Irvine Presbyterian Church in California, said that "within defined parameters, Satan and demons do have certain powers.

Scripture nowhere gives us a systematic account of the demonic, so there's much we can't know

for sure. But we do know that evil powers can impact life on this earth, even beyond the obvious actions of temptation to sin and demon possession. This is why, as Paul urges in

Ephesians 6:12, we should recognize that our true struggle in this world is against demonic forces..."

Nothing about the Stull Cemetery seems strange or abnormal, and all that people have said about the place may still be just a myth…the Stull myth.

But there are still many people living nearby who are true believers in this myth.

All stories with the devil involved have always had a stronghold on human imagination and beliefs.

Even today, many still believe that Satan lives in hell and often ask them whether old stories are nothing but pure fantasy.

But we must remember that if evil powers can impact life on this planet, they can even much easier form a single person's beliefs and beliefs, as we know, influence people's lives dramatically...

We also must remember that there is no smoke without fire concerning old legends, gossip, and rumors.