Angela Sutherland - AncientPages.com - Before a catastrophe occurred, there was a time in the distant past when the Gobi Desert was covered by water, spanning areas of China and Mongolia. 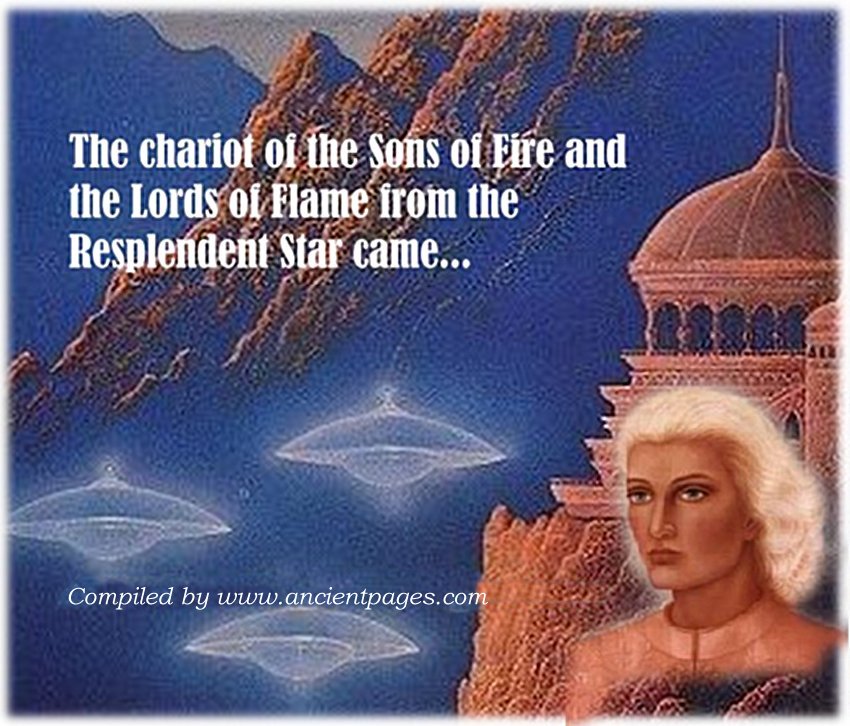 President Roosevelt proposed the expedition because he believed trees at one time grew in the Gobi Desert and that when the trees were cut down, the climate changed.

He thought if trees could be grown there again, it would correct the climate.

According to Theosophical Teaching,

"An island, where now the Gobi Desert lies, was inhabited by the last remnant of the race that preceded ours; a handful of Adepts -- the "Sons of God," now referred to as Brahman Pitris, called by yet another synonymous name in the Chaldean Kabala. Tradition says, and the records of the Great Book explain, that long before the days of Ad-am and his inquisitive wife He-VA, where now we find salt lakes and desolate, barren wastes, there was a vast inland sea which extended over Middle Asia, north of the proud Himalayan Range and its Western prolongations.

This sea existed until the last great glacial period, when a local cataclysm swept the waters south and west, formed the present great desolate desert, and left only a certain oasis..." 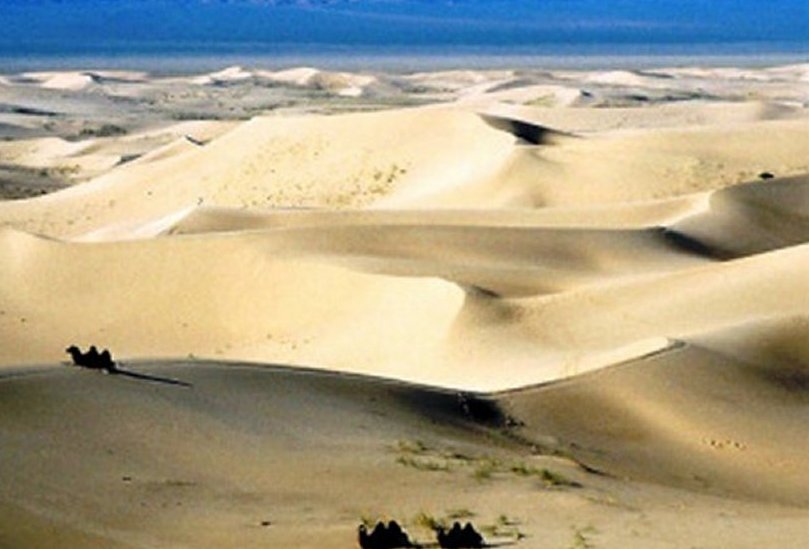 An ancient Indian text describes the actual landing of a mysterious and intelligent being called Sunatkumâra, meaning the "Everlasting Youth."

He arrived in his chariot and landed on the island in the Sea of Gobi.

He came with others of the same kind. They were friendly toward humans. They instructed people in various ways, helping to improve their lives.

The text describes their arrival as follows:

"Thundering down from unsearchable heights, wreathed in flames that filled the heavens with tongues of fire, came the chariot of the Sons of Fire and the Lords of Flame from the Resplendent Star. It alighted on the White Island of the Sea of Gobi, a green, marvelous expanse of fragrant flowers."

Also, sacred Chinese writings and the Tibetan Book of Dzyan confirm that in remote times, long before the Biblical Adam and Eve, there was a vast land inhabited by the real Sons of God, the "white men with blue eyes and fair hair", who "descended from heaven." 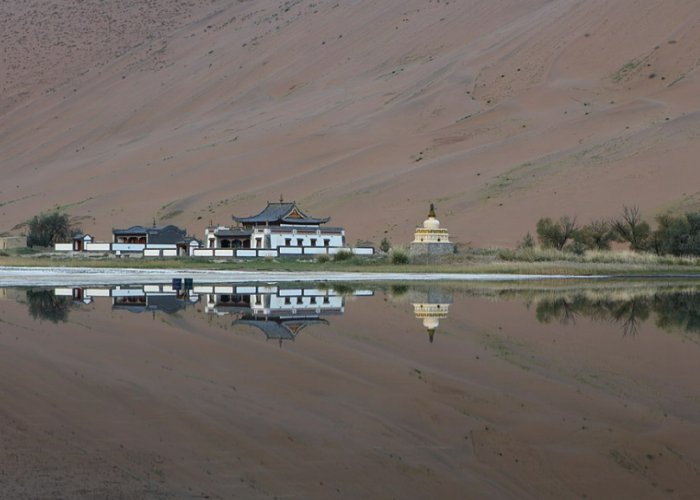 These heavenly beings were banished to Earth after a war in heaven. Like the fallen angels described in the Bible, they were the divine instructors of humankind. They imparted the arts of civilization to humans and taught them many valuable things, which made daily life easier.

It is said that these beings knew everything about heaven and the Earth. They entirely controlled Earth's elements, water, fire, and air.

In the esoteric doctrine, a "third war" is mentioned as taking place at the close of the 4th Race, between its adepts and those of the Fifth Race, i.e., between the Initiates of the sacred island and the sorcerers of Atlantis.

Tradition maintains that the "Sons of God," or the great Initiates of the sacred island, took advantage of the Deluge to rid the Earth of all the sorcerers among the Atlanteans.

In Vedic literature, referring to the earliest texts found in India, it is recorded:

They are said to have built a fortress, then a city, and then constructed underwater tunnels connecting their beautiful island with the mainland.

It was a long time ago, and it is hard to imagine such a distant past on Earth. But our planet has a very long history.

From the Theosophical teachings, we also learn that

"...around no other locality, not even Peru, hang so many traditions as around the Gobi Desert. In Independent Tartary, this howling waste of shifting sand was once, if the report speaks correctly, the seat of one of the richest empires the world ever saw. Beneath the surface are said to lie such wealth, in gold, jewels, statuary, arms, utensils, and all that indicates civilization, luxury, and fine arts, as no existing capital of Christendom can show today.

The Gobi sand moves regularly from east to west before terrific gales that blow continually. Occasionally some of the hidden treasures are uncovered, but not a native dare touch them, for the whole district is under the ban of a mighty spell.

Bahti -- hideous but faithful gnomes -- guard the hidden treasures of these prehistoric people, awaiting the day when the revolution of cyclic periods shall again cause their story to be known for the instruction of humankind. The district of the Gobi wilderness and the whole area of Independent Tartary and Thibet is jealously guarded against foreign intrusion.

Those who are permitted to traverse it are under the particular care and pilotage of certain agents of the chief authority and are in duty bound to convey no intelligence respecting places and persons to the outside world. The time will come, sooner or later, when the dreadful sand of the desert will yield up its long-buried secrets..."