A. Sutherland - AncientPages.com - Frigg is an early European goddess and she was Frea (or Frija) in western German myths and Frige (in Old English tradition), depending on cultural beliefs. 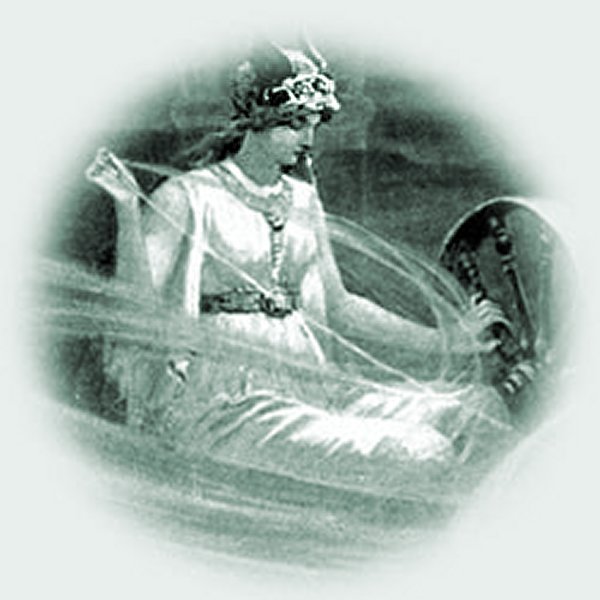 In Norse beliefs, Frigg was the personification of the sky, clouds and the earth and ruled Asgard as the chief of the female goddesses representing Norse pantheon of gods.  Her name means “the beloved”, “the friend”, “the wife”, and “dear”.

She is goddess of love, maternity, marriage and of the household. Although Frigg was the goddess of household, maternity and protector of marriage, she was unfaithful to Odin several times, including with his brothers.

She was mother of Balder, the god of the sun and light and Höder and Hermod. As wife of Odin, she shared his throne Hildskjalf, from which Odin could see all lands.

In a part of Prose Edda, "Gylfaginning", Snorri mentions the high seat of Odin, saying that "there is one abode called Hliðskjálf, and when Allfather sat in the high seat there, he looked out over the whole world and saw every man's acts, and knew all things which he saw."

To Frigg belonged the headquarters of Fensalir, a palace of mists, where she accompanied by her eleven handmaidens (also goddesses), used to sit at her jewel-covered spinning wheel making strands of golden thread and creating wonderful brightly colored clouds.

As the queen of goddesses, Frigg had a group of divine females around her. Especially, the goddesses Lin, Fulla, and Gna were closely associated with Frigg.

“…Lin is set to guard those of mankind whom Frigg desires to preserve from harm. Fulla, a maiden with long flowing hair and a golden chaplet about her brow, carries Frigg’s hand casket, keeps watch and ward over her shoes, and shares her secrets. Gna runs errands for Frigg through the various worlds, especially in matters requiring despatch, in which instances she rides the horse Hofvarpnir, who races through the air and over the waters…” 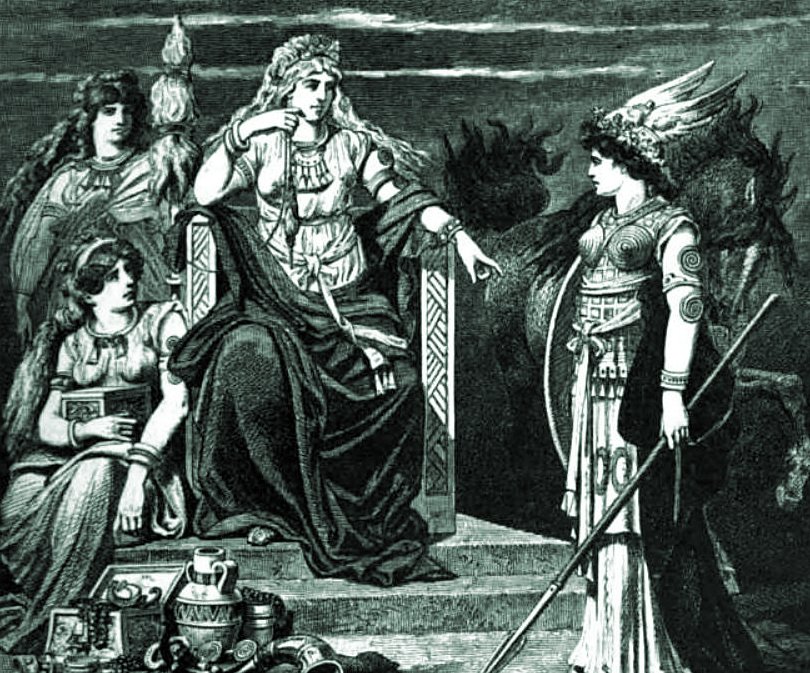 Frigg sitting on her throne and accompanied by her attendants, the divine maidens. Image credit: Carl Emil Doepler/1882

The other maidens of Frigg were busy with other important duties, which more or less were associated with different attributes of the chief goddess.

One of them was a highly skilled healer; another could easily remove all obstacles disturbing love affairs and yet another was responsible for punishment of those who broke their trust and confidence.

The goddess was a very handsome, tall lady. Her head was often decorated with plumes and keys were hanging from a beautiful golden girdle around her waist. It was believed the keys symbolized the northern housewives whom Frigg protected and guarded while the plumes were symbols of feathery clouds in the sky.

As the personification of the sky, Frigg was often depicted wearing a big blue coat symbolizing the sky, according to a myth. Similar to the goddess Freya, she was supposed to be the owner of a falconry robe that would allow her to change her character.

Frigg's main symbols include the full moon, the sky, the spinning wheel and spindle, mistletoe and silver, many of which are shown in artistic representations of her.

Skadi, goddess Of Destruction And Patron Of Winter Hunters And Skiers In Norse Mythology

As to her abode, Fernsalir (Old Norse "Fen Halls"), the descriptions of the place vary. Fensalir means “the hall of the seas” (”halls of the clouds”) and in one version, it was described as an amazingly beautiful place, in another one, it was a gloomy place, associated with the mists and darkness, and through this place, Frigg appears to have a link to Hel, ruler of the underworld and a daughter of Loki, the trickster.

Frigg possessed foreknowledge and could access the secrets of humans’ fates. She was said to hold knowledge of people's continued fate through her husband Odin, but was unable to reveal these secrets. However, both Frigg and Odin possessed the gift of prophecy, according to Snorri’s Prose Edda Prologue. 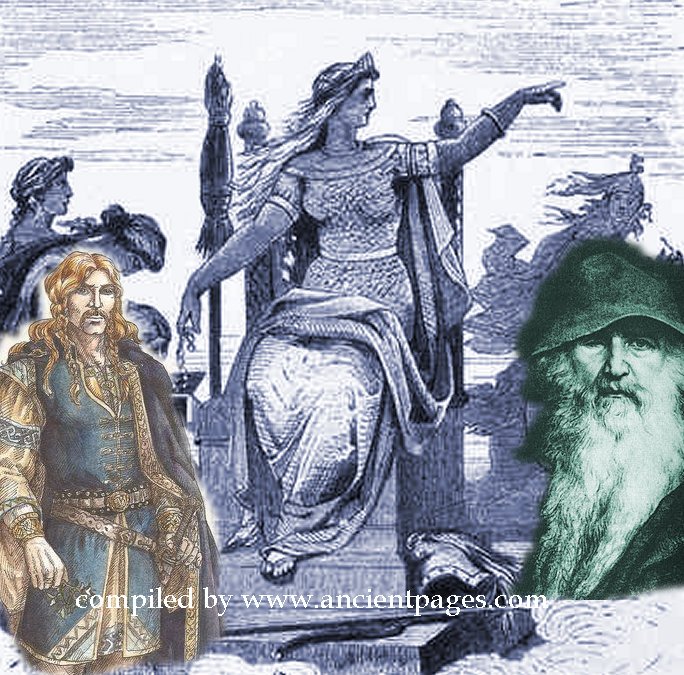 Odin often consulted his wise wife on many issues, and although Frigg did not devote herself to divination, she knew a lot about the future.

As a weaver, she makes us think about the Greek Fates, also skilled weavers who were responsible for controlling time by measuring length of fiber with the help of their spinning wheels.

There is also resemblance between Frigg and the Slavic spirits of fate and judgement, the Sudice, who were responsible for fates and destiny of humanity, they judged and meted out fortune and fatality.

Frigg Was A Popular Goddess

Her name was widely known among German and English tribes and the cult of Frigg survived in ancient place names in Sweden and Norway.

Most famous is a myth describing the death of Balder and Frigg’s desperate attempts to protect him from death.

Frigg had to cry twice in the history of the world. For the first time she wept for her son Balder in her palace Fensalir, while mourning her beloved son. In the same way, she will mourn her husband, Odin at Ragnarok (Ragnarök), the end of the world.

During his fight with the wolf Fenrir, he will be consumed by the monster. The völva predicted that it would occur during the last battle of gods with giants and other monsters of chaos.

The Goddess Frigg Will Survive Ragnarok.

Due to some of her domains, Frigg was sometimes associated with Freya, another popular goddess in Norse beliefs. Occasionally, several functions of these two goddesses mixed together. Some scholars suggested Frigg and Freya once represented only one goddess, later divided into two separate characters.

Frigg is mentioned throughout the  Poetic Edda, the Icelandic medieval manuscript known as the Codex Regius, in the poems Völuspá, Vafþrúðnismál, the prose of Grímnismál, Lokasenna, and Oddrúnargrátr. The goddess has given names for Fridays, and Friday was considered the best day to get married, according to ancient beliefs.

Frigg was associated with the Roman goddess, Venus.

Munch P. A. Norse Mythology, Legends of Gods and Heroes