A. Sutherland - AncientPages.com - The so-called ‘Anatomical Machines’ are preserved in the underground crypt of the Sanseveri Chapel, located in the historic center of Naples, Italy.

The ‘Anatomical Machines’ are the skeletons of a man and of a woman in an upright position with the artery and vein systems almost perfectly intact.

Still today, after about two-and-a-half centuries, it remains a mystery what procedures and/or materials were used to obtain such exceptional preservation of the circulatory system.

The ‘Anatomical Machines’ are the skeletons of a man and of a woman in upright position with the artery and vein systems almost perfectly intact.

Stored in two glass cases, the pair represents one of the most impressive monuments that the human mind has ever conceived.

The ‘Machines’ were made by the doctor Giuseppe Salerno, an anatomist from Palermo, Italy under the direction of Raimondo di Sangro, Prince of Sansevero (1710-1771), alchemist and Grand Master of Neapolitan Masonic Lodge, philosopher, and poet, naturalist, and anatomist, astronomer, philanthropist. 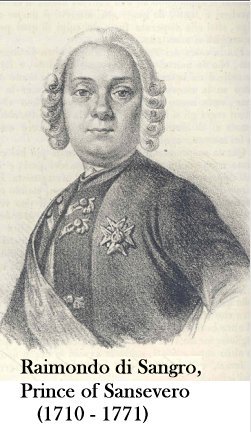 According to an anonymous document – the ‘Short Note’, which is considered a guide to the Palace and the Sansevero Chapel, a mysterious injection was involved in the procedure.

Was a technique known as ‘anatomical injection of embalming substances’, a part of this mysterious procedure?

It is said that Dr. Salerno injected a substance – perhaps based on mercury – into the two corpses.

The substance would have been created in a laboratory by the Prince of Sansevero and would allow the “metallization” of the blood vessels.

There is also another suggestion, namely, that the circulatory system was ingeniously reconstructed in these two amazing anatomical ‘machines’.

In fact, the arteries and veins are reproduced with remarkable perfection, even the smallest vessels, despite the fact that knowledge of anatomy was not as precise as it is today.

In the ‘Short Note’, the ‘machines’ - kept in a room in the palace of the Prince of Sansevero, called “the Apartment of the Phoenix” – are described in detail. 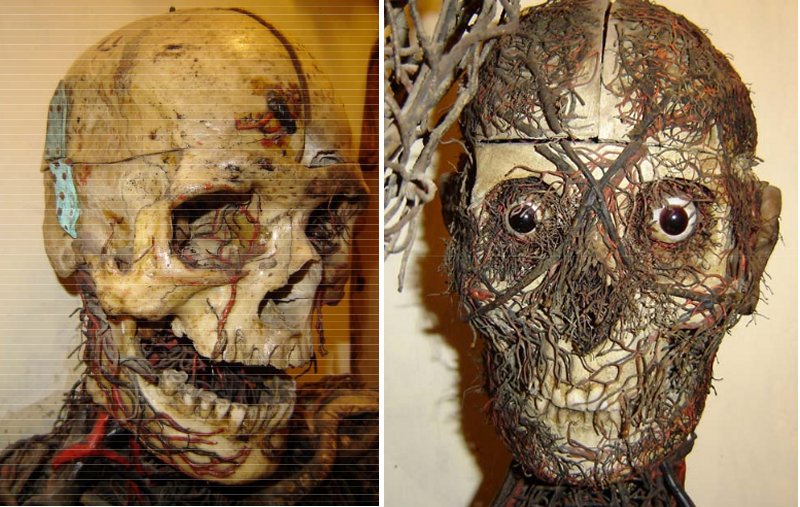 Left: The crania were sawn open so that the complex network of blood vessels present in the cranial cavity could be inspected; Right: The outer surface of the female’s canium is covered with blood vessels.

At the feet of the woman, the guide states, there was placed “the tiny body of a foetus”, alongside which there was even the open placenta, connected to the foetus by umbilical cord.

Some of the vital organs are present but also seem misplaced. Although the organs were not sampled, visual examination suggests that they may have been made with a core of wood which was coated with wax.

Left: The male has only 16 teeth; some have longitudinal cracks; Right: The female is mounted onto a plinth, attached to it from the feet.

The two anatomical studies were moved to the Chapel, and in this way saved from destruction or loss, long after the death of the Prince.

The remains of the foetus were still visible up to a few decades ago until they were stolen. According to popular belief, Raimondo di Sangro “had two of his servants killed”, a man and a woman, and embalmed their bodies.

In Greek mythology, Phoenix - a long-lived bird that is cyclically regenerated or reborn - gives the association with the myth of resurrection and immortality. 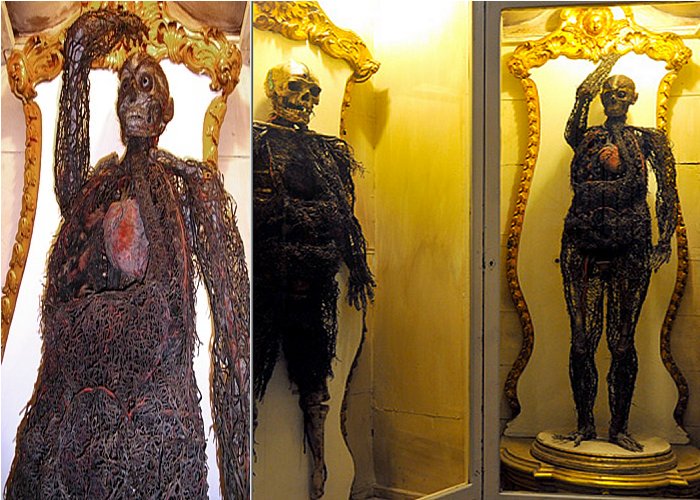 Was a technique known as ‘anatomical injection of embalming substances’, a part of this mysterious procedure?

Were these fleshless bodies the objects of di Sangro's studies? He was often portrayed as a 'misunderstood man, who was ahead of his time.

Was the ‘Apartment of the Phoenix’ used intentionally or was the name 'Phoenix' chosen accidentally?

These questions may seem rather difficult to answer and due to lack of written documentation on the early history of the anatomical machines, the mystery will probably never be solved.

Aluminum Was Used At Least 7,000 Years Ago – Long Before The Metal’s Official Invention In 1825

Until recently many Neapolitans believed that the models were of his servant and a pregnant woman, into whose veins an artificial substance was injected under pressure, but the latest research has shown that the models are artificial.

No evidence was found to indicate that the vessels of the cadavers used to make the 'human machines' were injected with embalming substances.

Di Sangro destroyed his own scientific archive before he died. After his death, his writings, formulae, laboratory equipment and results of experiments were destroyed, probably under threat of excommunication by the Church due to Di Sangro's involvement with Freemasonry and alchemy.