AncientPages.com - A merkhet ("instrument of knowing") was an ancient Egyptian timekeeping instrument used for telling time at night. It is an amazing example of ancient technology.

The device was used for gauging astronomical alignments, with which the Egyptians achieved impressive accuracy — often less than an inch or so from being perfectly level or straight. 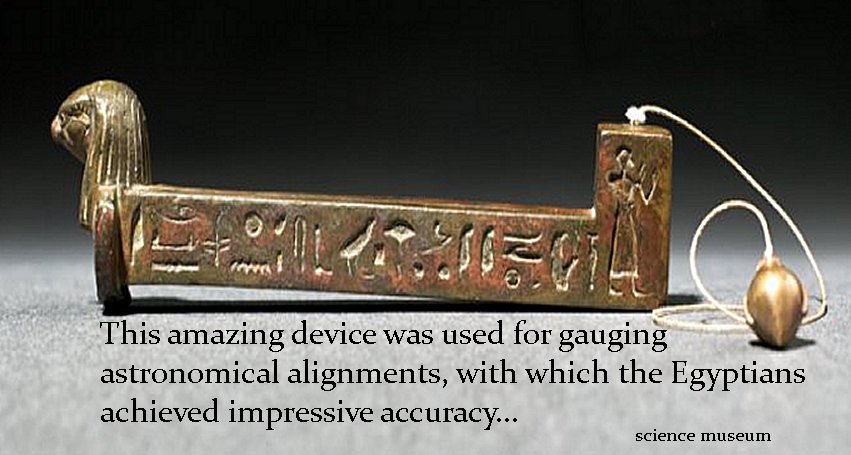 The device's accuracy enabled to make astronomical observations. As a surveying tool, it  was used in leveling to maintain a straight line. It was essentially an L-shape plumb bob secured on a holder aligned with a cleft staff. The bob would hang from the short vertical arm.

Based on the texts and engravings on the inner walls of the Egyptian temples of Dendera and Edfu, scientists concluded that the merkhet was typically used in conjunction with a corresponding sighting tool, which the Egyptians called a bay, itself made from a specially cut palm-rib with a sliced "V" shape at one end.

The two of these instruments could also be used, together, to determine North. The merkhet consisted of a string with a weight attached to one end, enabling a straight line to be measured. For the operation to work, two merkhets were required, one aligned with Polaris, the North Pole star. If erected properly, and if a bay was on hand, one could estimate quite accurately the time by observing the transits of certain stars as they crossed the meridian and came into alignment with the two merkhets.

Astrolabe: A Beautiful, Mysterious And Sophisticated Computer Of The Ancient World

Several extant merkhets are on display at museums with collections of Egyptian artifacts, and numerous works of Egyptian art depict the use of merkhets. It has been suggested that these instruments were probably used in the construction of temples and tombs to align the structures in particular ways.