Thalia Lightbringer - AncientPages.com - Horus was worshipped in different forms throughout Egypt from the predynastic period before Egypt was united under one ruler until Roman times. The pharaohs of Egypt took a Horus name to symbolize that they were the living embodiment of this god. 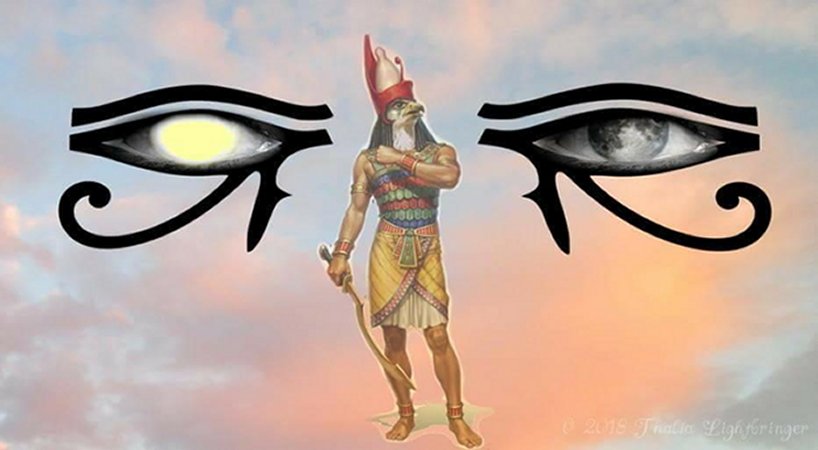 The myths associated with Horus are sometimes confusing. Some disagree on his origin and associations. However, these confusions can be understood in the context of the times if you delve into the history of Egypt.

What Did Horus Represent?

Horus was the champion of the Egyptian pantheon. He was the soaring falcon Khemwer, the great black one, also called the son of truth. Like a white knight (except in this case white is black), he stood for justice and upheld proper harmony and order, Ma'at. Khemet, the black land, was what the Ancient Egyptians called their home, and Horus protected it from the ruler of the Red Land, the Deshret (desert), ruled by Set (or Seth).

Horus was the god of the sky and protector of kingship. He is usually depicted as a falcon or a man with the head of a falcon. The hieroglyphic bird sign (Har, Her, Heru, Hor) for Horus is said to mean "the distant one" or “the one on high” but is sometimes interpreted as "hawk." However, due to the markings under the eye of the lanner falcon, which are similar to the Eye of Horus, it is likely that this falcon is most closely associated with Horus in ancient times. Many authorities also suggest the peregrine falcon.

Horus In The Earliest Times

Falcon gods were worshipped throughout Egypt from predynastic times. Before the Two Lands of Egypt were united by Narmer, Horus was worshipped as a patron god at Nekhen (Greek Hierakonpolis, translated as "Hawk City," maybe the source of the hawk vs. falcon confusion). This was the capital of Upper Egypt in prehistoric and early dynastic times and remained important as a religious center even during the Greek occupation. Predynastic Kings of Upper Egypt were called "Followers of Horus."

Horus eventually absorbed many of the functions of the different falcon gods, becoming known by different names depending on which function he was serving in that instance. He was Harmakhis (Har-em-akhet, “Horus in the Horizon” i.e. the setting sun) and Harakhte or Ra-Horakhty (Hor-akheti, “Horus of the horizons” i.e. from rising to setting) when associated with the sun god Re (Ra). This form was popular with later dynasties after Re gained prominence. After the Fifth Dynasty, the pharaoh was said to be the living embodiment of the sun god Re instead of Horus.

At Kom Ombo, Horus was worshipped as Haroeris (Harwer, or Her-ur “Horus the Elder” or "Horus the Great"). Horus the Elder appears to be one of the oldest forms of this god, a creator god of light and lord of the sky. In this form, he is said to be the husband of Hathor (“House of Horus”), goddess of love. This came from the times when the primordial eight (Ogdoad) of Hermopolis were worshipped, then replaced by the nine (Great Ennead) of Heliopolis. Geb (Earth) and Nut (Sky) were among these nine, along with their children Horus, Isis, Osiris, Set, and Nephthys.

The Elder Who Grew Younger

Another name for Horus used in later times is Harsiesis (Har-si-Ese, “Horus, Son of Isis”). It is unclear as to how Horus could have been the brother of Isis and then born as her child. Perhaps because Egyptians thought that the spirit of Horus inhabited the body of the pharaoh while living, then moved to whoever took the throne, this was not confusing to them. The ancient Egyptians also believed that the spirit of a god could inhabit an animal born with special markings associated with the god. 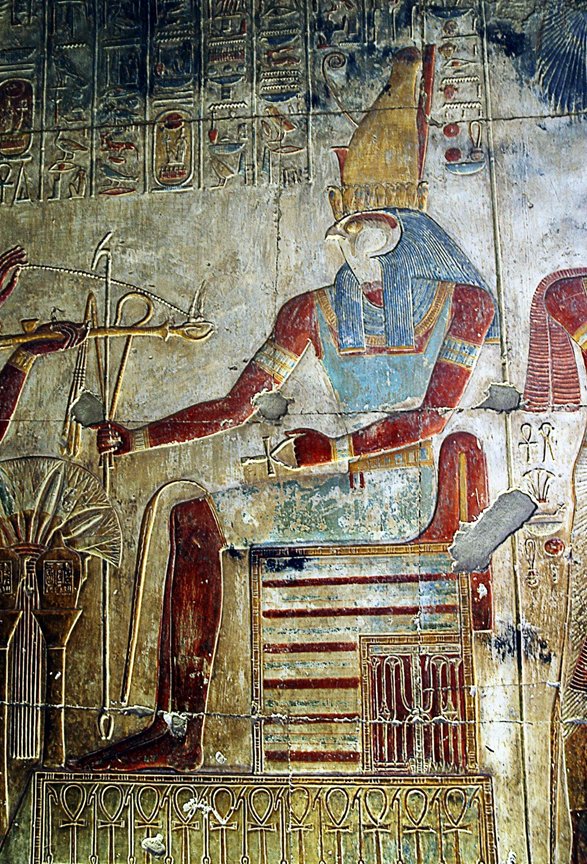 Relief of Horus in the temple of Seti I in Abydos, by Rhys Davenport from the United Kingdom - Horus - Temple of Seti I, CC BY 2.

From around 2350 BC, stories became popular about Horus the son of Isis and Osiris, sometimes said to have been magically conceived after the death of Osiris with the aid of Thoth. After Horus became the son of Isis, he is often depicted as a child being nursed by Isis or sucking his finger and is called Har-pe-khrad, or Heru-pa-khered, “Horus the Child or the Younger” (Harpokrates in Greek, or Harpocrates, Roman spelling). This form of Horus was particularly popular with the Greeks. He was identified with Herakles because he was shown strangling or trampling on snakes or other dangerous creatures.

Though mostly seen as a deity with a protective and healing function, Horus was also identified by the Greeks with Ares, their god of war. Horus taking on this function could be related to warring factions of Horus and Set devotees (indicated by the 2nd Dynasty pharaoh Sekhemhib or Seth Peribsen taking a Set Name instead of a Horus Name and the last ruler of that dynasty, Khasekhemwy, using both). In many stories, Horus became the enemy of Set after the death of Osiris and was given dominion over Egypt's fertile lands, while Set was associated with the desert and foreign lands.

Another title given to Horus was Hor Merti "Horus of the two eyes." The Eye of Horus was a powerful symbol of protection and healing that was often worn as an amulet. Though many refer to both the right and left eye symbols as the Eye of Horus, Wedjet, or Udjat ("Whole" or "Complete"), the Eye of Horus is specifically the left eye, which was said to be the moon.

The left eye of Horus was injured in a fight with Set, who lost a testicle. Stories say Horus had Thoth heal his eye or that Khonsu the moon god gave part of himself to replace the eye. This was used as an explanation of the waning and waxing of the moon, so apparently, the healing had to be renewed periodically. Set, however, never got his testicle back, explaining the barrenness of the desert he ruled. 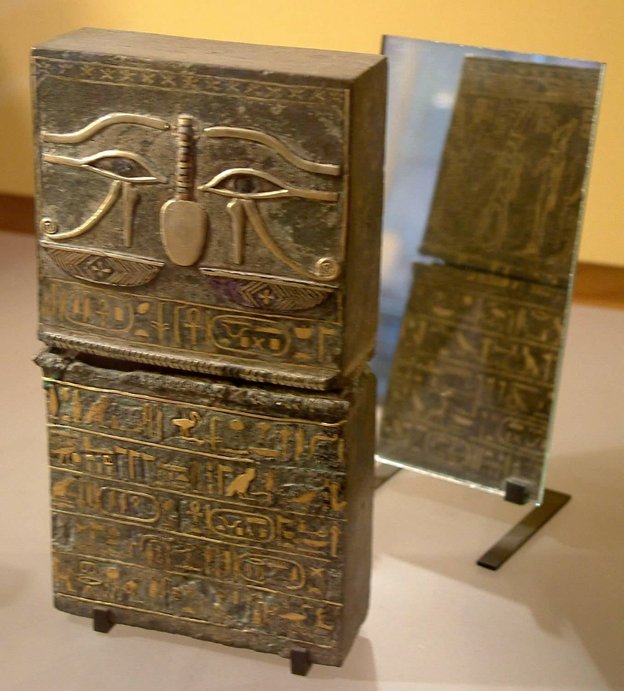 The right eye was said to be the sun, and when depicted as a symbol, it refers to the Eye of Ra, which was protective as well, but in a destructive, vengeful fashion. These eyes were also identified with goddesses. In one odd myth, Ra sends his eye to take vengeance for him. When she returns, his eye has grown back, so he places her on his forehead as the uraeus serpent.

There is much more that could be said about Horus, many stories, and other names and forms. However, the aim of this article was to give an introduction to this popular figure and show how he changed over time, due to political changes in Egypt. Still, throughout all changes, Horus remained a protector of the living and keeper of order, an interesting and many-faceted figure who was respected from the beginning of the Egyptian civilization through Roman times.