A. Sutherland - AncientPages.com - The Sokushinbutsu Buddhist monks of northern Japan were those who were able to mummify their bodies while alive.

These monks practiced an extreme physical act of self-deprivation. They spent years slowly preparing their bodies by starving themselves to death, according to a carefully prescribed method. 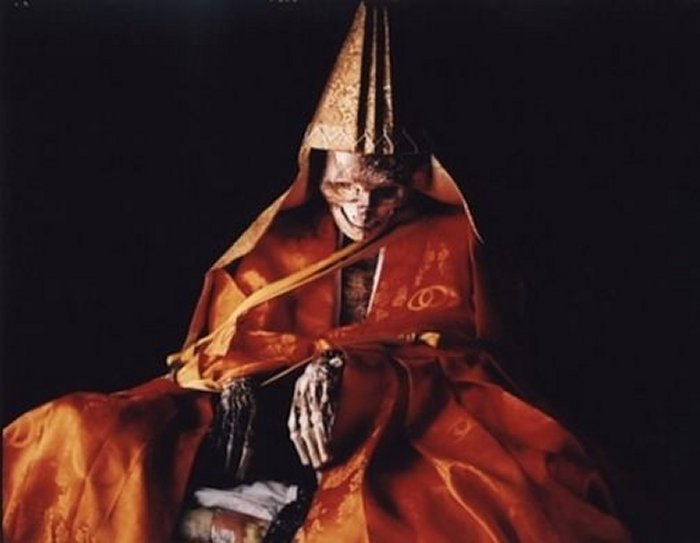 The procedure could gradually change their bodies to the physical state necessary for mummification.

The purpose of successful act of self-deprivation was to disregard their physical self.

Those who were successful at mummifying themselves were considered by their followers to be a Buddha. Their preserved bodies would be displayed in temples; a symbol of the possibility of attaining the status of Buddha.

There are only between 16 and 28 known successful cases of self-mummification (Sokushinbutsu), however, only 16 of them can be visited.

The Sokushinbutsu monks were first of all, elderly Buddhist monks of the Shingon (or the so-called “True World”) sect founded by the great Kukai (774–835). He was sent to China by the Japanese emperor at the beginning of the 9th century. There, he became a disciple of Huikuo, a great Buddhist teacher.

Later, he returned to Japan and brought with him many esoteric practices. One of them, was a secret tantric ritual 'sokushinjobutsu' (“attaining Buddhahood in the flesh”). It was an extreme ascetic and suicidal practice of self-mummification.

Kukai founded a monastery on Mount Koya, beginning the Shingon school of Buddhism. Shingon foundation was based on the belief in the three mysteries of Buddhism - body, speech, and mind. It was thought that one could attain Buddhahood through mastering any one of them. 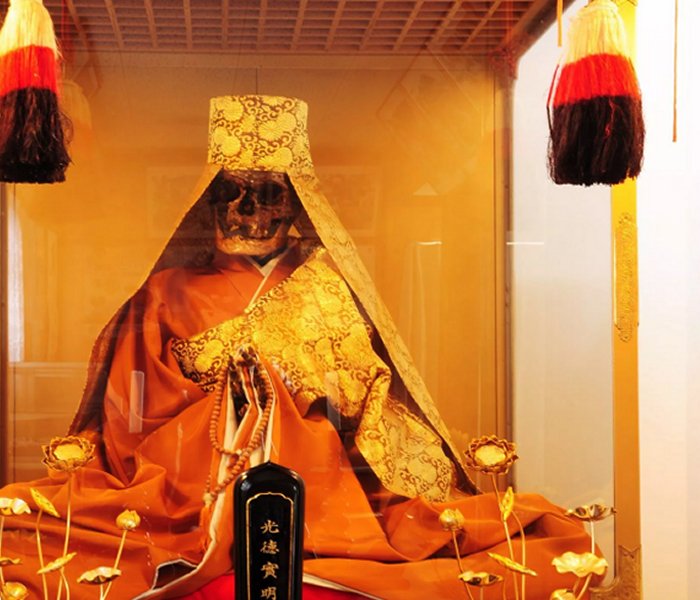 The Sokushinbutsu monks were first of all, elderly Buddhist monks of the Shingon (the so-called “True World”) sect founded by the great Kukai.

The Sokushinbutsu monks believed that physically destructive acts lead to the path of enlightenment. It is said that Kukai himself is still sitting in the lotus position inside the stone of Mount Koya, although the public are not allowed to see him.

After he died, Kukai was known as Kobo Daishi ("The Grand Master Who Propagated the Buddhist Teaching").

During the first stage of the Sokushinbutsu process, lasting 1000 days (almost 3 years) the monk had to follow very rigorous physical exercise every day. His only food was nuts and seeds. Now, his body fat was almost completely eliminated and he could begin the next step in the Sokushinbutsu  ritual. 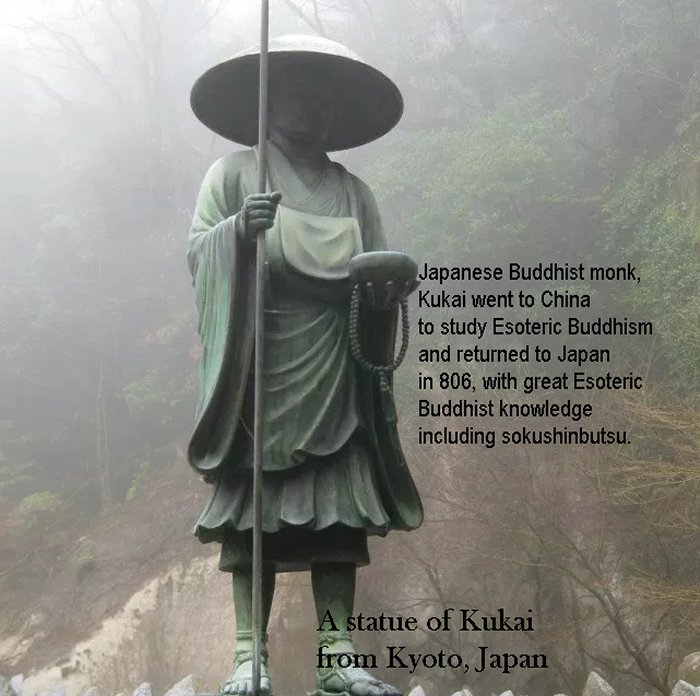 For the next one thousand days, he would move on to an even sparser diet of bark and roots from pine trees called mokujiki. Towards the end of this time, the Sokushinbutsu monk would begin to drink poisonous tea from the sap of the Urushi tree.

Another name for this tree is the Japanese Varnish tree. Its sap is cultivated as a lacquer used to lacquer bowls. This diet would dehydrate the monk, and this process would slow down his body’s decomposition once he was dead.

The Urushi tree tea would make him vomit, sweat and urinate frequently leeching almost all moisture from his body. This tea was also so extremely toxic that it would prevent maggots from feasting on the corpse.

At the end of this second period of one thousand days, the monk would lock himself in a stone tomb, with limited space for him to sit in the lotus position. He would neither eat nor drink, but only sit in stillness, breathing from an air tube inserted in the tomb and ringing a bell each day to let those outside know he was still alive.

The day that the bell remained silent, it was understood that the Sokushinbutsu monk died.

The other monks would then remove the air tube and his tomb was sealed for another thousand days. Then, according to tradition, the tomb was opened to control if the body was preserved. If he was not preserved, the tomb would be re-sealed, and the monk would remain in his stone tomb forever. If the body was successfully preserved, the monk was a Buddha, and would be removed for the disciples to worship. The most famous is Shinnyokai Shonin of the Dainichi-Boo Temple on the holy Mount Yudono who successfully mummified himself.

It has been suggested that a local spring in the vicinity of the temple had high levels of arsenic, and this may have helped the monks in the mummification process.

In the late 19th century, the Japanese government banned the ritual, which continued to the 20th century.