AncientPages.com - The first known police force was established in 400 BC in Athens, Greece.

According to accounts from speech writer in Ancient Greece, Andocides and a Greek statesman and one of the ten Attic orators, Aeschines, the first police force in ancient Greece, consisted of publicly-owned Scythian slaves, the so-called Scythian Archers. 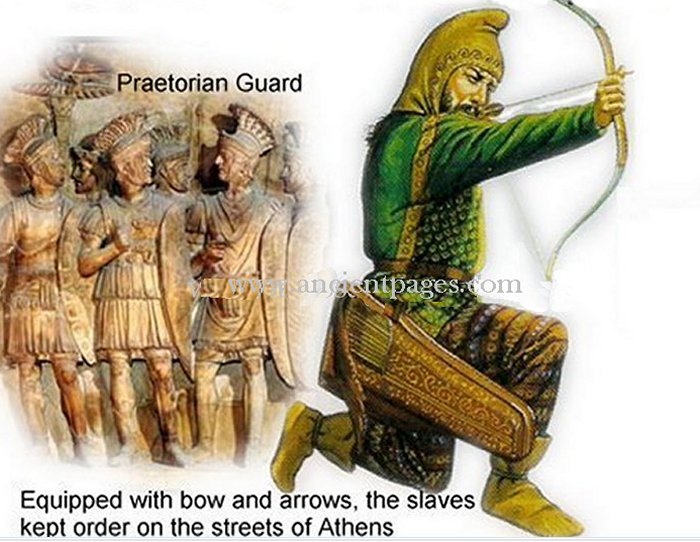 Historical evidence shows that in ancient Greece, sporadically police authorities began to form and excel mainly in Athens, where publicly owned slaves were used as a police force.

Three hundred of them were employed by magistrates for crowd control, to maintain law and order in the city's streets and among other things to keep order during political meetings.


This police force also assisted with dealing with criminals, handling of prisoners, and making arrests.
Equipped with bow and arrows, the slaves kept order on the streets of Athens. They had the power to arrest and monitor prisoners. Investigation and detection of crimes, however, was still reserved for Athens free citizens.

Following the concept of the police force, Augustus (27 BC - AD 14) created the so called Praetorian Guard, an organization to protect the emperor and be his personal bodyguards. They enforced his laws and maintained public order, which was of so high level that it remained in effect until the decline of the great Roman empire.

During the Middle Ages the legal system in Europe was in the hands of local lords and nobles, responsible for maintaining of order in their districts.
Appointed by the king, these district noblemen were both executive and judiciary in their respective fields.

Left: In the Roman cities, small forces of gendarmes, often recruited from slaves, acted under the direction of civilian magistrates. But elsewhere it was the army itself that kept the peace; and military units were stationed at such strategic points as river-crossings and road-centres. Right: The ‘hermandades’ initially began to form in Andalusia,Spain in the 12th century.

Each noble usually appointed an official, known as a constable, whose duties included keeping the peace and arresting and guarding criminals.
For serious crimes, however, the prisoner had the right to raise his/her case in the Royal Court.

The 'hermandades' (in Spanish, 'brotherhood') initially began to form in Andalusia in the 12th century. They were one of many voluntary organizations formed in Spain during the 13th, 14th, and 15th centuries to maintain public order and resist the depredations of the nobles and later to exercise general police functions.

A modern European Police appeared for the first time in 1667, when King Louis XIV of France established a police force consisting of 44 inspectors under an official name the "Lieutenant General of Police".
Already two years later, the system was applied to all major cities in France. In 1829, the French officers were the first in the world who received uniforms!

In 1663 the city of London began paying watchmen (generally old men who were unable to find other work) to guard the streets at night. Until the end of the 18th century, the watchmen and a small group of constables, constituted the only form of policing in the city.