AncientPages.com - Ancient Persians were familiar with chemical warfare 2,000 years ago. Researchers who examined an ancient grave filled with Roman soldiers believe they have found oldest archaeological evidence of chemical warfare ever found.

As preciously mentioned in our article, war between Romans and Persians lasted 721 years. It was the longest human conflict in history.

On one occasion, ancient Persians were lying in wait as the Romans dug a tunnel during a siege. They used the opportunity to pump in toxic gas, produced by sulphur crystals and bitumen. The Roman soldiers died within minutes. Skeletons belonging to 20 Roman soldiers' discovered underground in Syria, show clear signs of the use of chemical weapons.

The soldiers had been part of a large Roman garrison defending the empire outpost city of Dura-Europos, on the Euphrates river in modern day Syria, against a ferocious siege by an army from the powerful new Sassanian Persian empire in around AD 256. 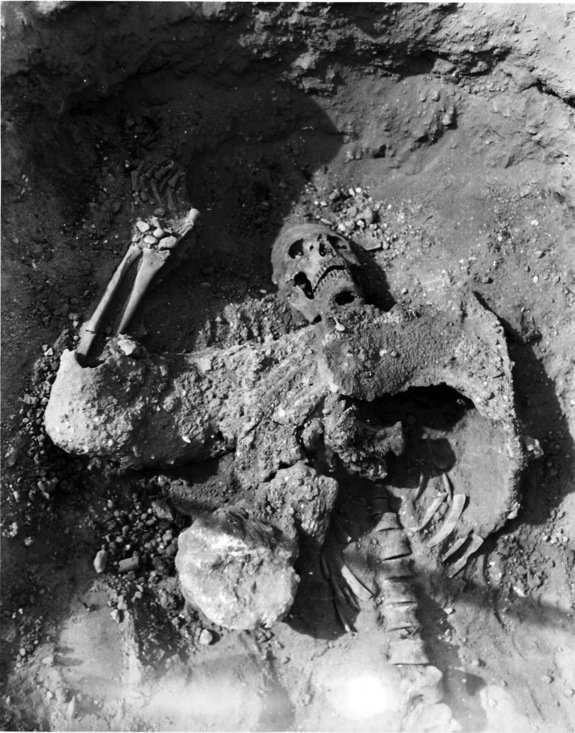 The skeleton of a Persian soldier found in the siege tunnels of Dura. Archaeologists think he was perhaps the one who started the toxic underground fire. Credit: Courtesy of Yale University Art Gallery, Dura-Europos Collection

There are no written historical records of this event, but archaeological discoveries have helped scientists to piece the action together after excavations in the 1920s and 1930s. Roman defenders responded with 'countermines' to thwart the attackers.

"It is evident that, when mine and countermine met, the Romans lost the ensuing struggle.

"Careful analysis of the disposition of the corpses shows they had been stacked at the mouth of the countermine by the Persians, using their victims to create a wall of bodies and shields, keeping Roman counterattack at bay while they set fire to the countermine, collapsing it and allowing the Persians to resume sapping the walls.

"But this doesn't explain how they died. For the Persians to kill twenty men in a space less than two meters high or wide, and about 11 meters long, required superhuman combat powers – or something more insidious."

Finds from the tunnel revealed that the Persians used bitumen and sulphur crystals to get the fire burning – and this was to prove the vital clue, Dr James, a researcher at the University of Leicester studied the event said. In his and other researchers opinion this is the first evidence of ancient chemical warfare.