Ellen Lloyd - AncientPages.com - If you look through the Irish mist, you might catch a glimpse of the enigmatic Celtic Otherworld. Some ancient legends tell this beautiful place shrouded in mystery, co-exists next to our own reality, like a parallel invisible world.

Other myths and legends say, the Celtic Otherworld is hidden somewhere underground and can be reached by entering ancient burial mounds.

The location of the Celtic Otherworld is unknown, but it is home to the Tuatha Dé Danann, the people of the Goddess Danu, a supernatural race of God-like beings who invaded and ruled Ireland thousands of years ago. 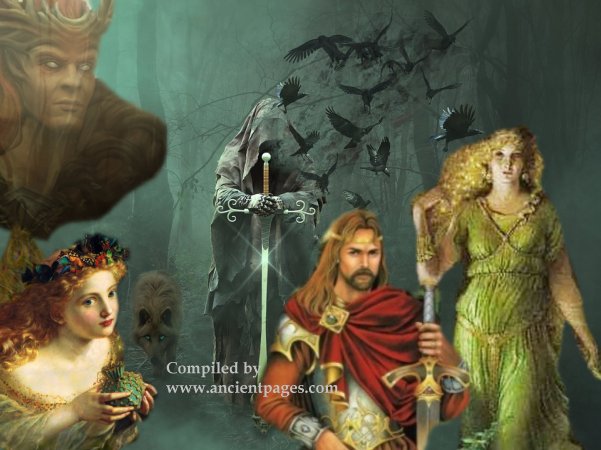 The Tuatha Dé Danann ruled  Ireland before being driven underground into the sidhe (burial mound) and this could explain why Celtic myths reveal that the entrance to the Otherworld is through a burial mound.

Life In The Celtic Otherworld

In Irish mythology, the otherworld has several names, including Tír na nÓg, Mag Mell and Emain Ablach. In Irish myth there is also Tech Duinn, where the souls of the dead gather.

Ancient Celts believed in immortality and this is reflected in the concept that the Otherworld is a place where death and suffering no longer exist.

It sounds like a paradise, but even though everyone who resides there is always young, beautiful, and happy, there are occasionally troubles, disputes and even battles. 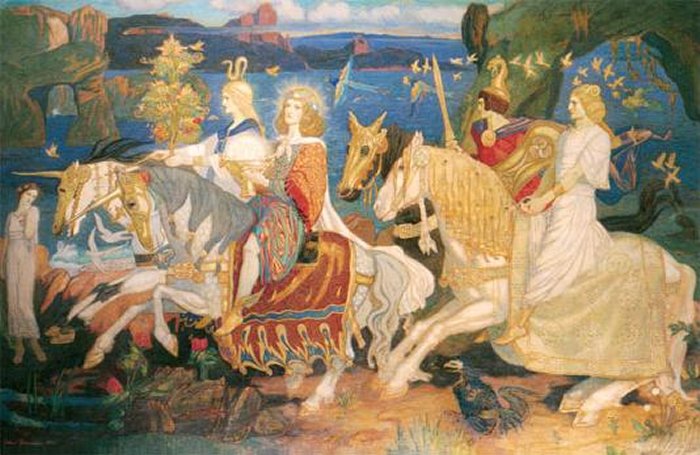 The Tuatha Dé Danann as depicted in John Duncan's "Riders of the Sidhe" (1911). Credit: Wikipedia

Despite their magical powers, the Otherworld beings still need human assistance to solve their problems. The Celtic Otherworld is not only the dwelling place of the Tuatha Dé Danann, but also mythical heroes such as Cuchulainn, who surprised with his divine, magical weapons he possessed and supernatural powers he could use as he wanted.

Knowledge has always been sacred to the Celts, and like ancient Egyptians, they restricted who was allowed to obtain the wisdom of the gods. In the Otherworld one could drink from a well or eat the salmon in it, to become wiser, but some knowledge was forbidden even to some members of the divine land. Legends tell that the four magical treasures of Tuatha Dé Danann may have been brought from the Otherworld.

How To Reach The Celtic Otherworld

Since many believe the Otherworld is so near our own world, they hope they can contact this supernatural place during festivals such as Samhain and Beltane.

It is possible to visit the Otherworld after being invited by one of its residents, but there are also myths and legends about people who stumbled upon this supernatural realm by chance.

Epona – One Of The Oldest And Widely Known Celtic Deities

For example, in the story of Pwll and Arawn, Cornac went looking for his family after exchanging them for a branch of magical golden apples. He went through a mist and found himself in an incredible land where there was no age, nor decay, nor gloom, nor sadness, nor envy, nor jealousy, and nor weeping. Cornac had entered the Celtic Otherworld.

Some myths tell the Otherworld is located beneath or beyond a lake.  This is based on the belief that water is a symbol for the unconscious and the spirit.

It’s very interesting to note that times passes much slower in the Otherworld. Ancient Pages wrote earlier that the Celtic Tree of Life served as a portal to invisible worlds and a source to sacred knowledge, guarded by the most enlightened ones.

Could the same be said about the Celtic Otherworld? Those who are familiar with a phenomenon known as time dilation are aware of that as an object moves through space, time itself is measured differently for the moving object than the unmoving object.

The Celts spiritual beliefs are reflected in their views of the Tree of Life. Read more

Basically, this means that time slows down as one nears the speed of light. It’s a concept in modern physics, but it’s also curious that ancient Celts who emphasized the nature of reality also described a place where time moves slower.

This can, of course, be just a coincidence, but it’s intriguing nevertheless. We should also not forget that ancient Celts believed there were gateways leading from the material into the spiritual world. To understand how to enter these gateways, one had to have the knowledge of the meaning of symbolism. According to the Celts, there was a very close connection between a symbol and its meaning. This means that all things are interconnected, and this concept applies to our reality and other invisible worlds.

If you are interested in exploring this subject further, you can read our article: 10 Ancient Celtic Symbols Explained