A. Sutherland  - AncientPages.com - In the Mayan supernatural world, we meet many gods with very specific attributes and special functions assigned to the gods.

Then Maya gods had human characteristics and had or represented animal forms. Most of the Mayan gods embodied the celestial bodies or powerful forces of nature such as rain, lightning, wind, or thunder.

Maya admired them, had to show them obedience, and make sacrifices, often from their own blood. Certain gods were feared by Maya, especially those associated with death because these people were much more afraid of death than other cultures of Mesoamerica. 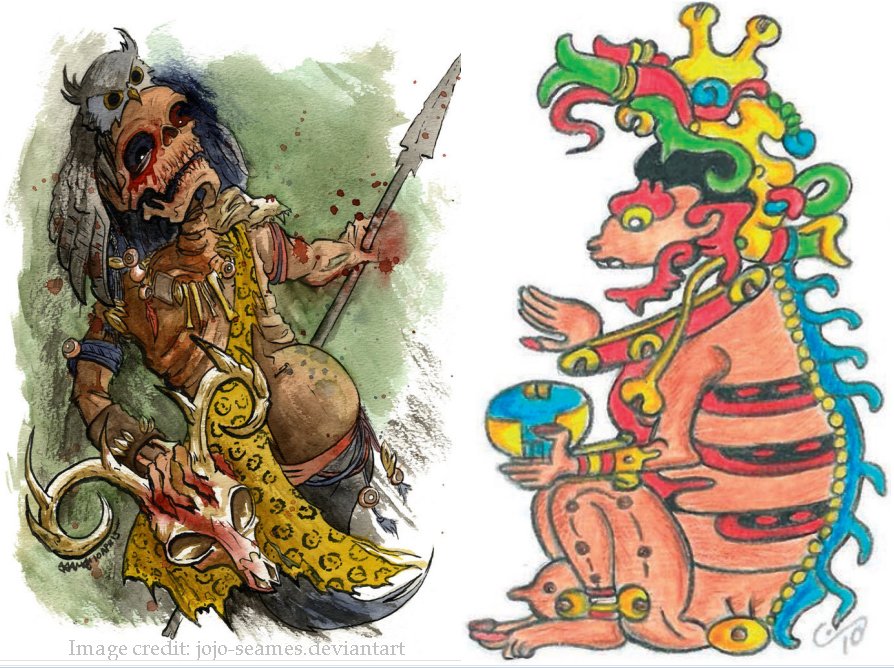 One of them was an evil god of death, Ah Puch (“to spoil, to melt or dissolve”), whose domain was the ninth and at the same time lowest part of the Maya underworlds. The Quiche (K'iche) Maya believed that he ruled over Metnal (Xibalba - "place of fear"), while in the mythology of the Yucatec Maya mostly from Mexico, Belize, and Guatemala, he was one of several Lords of Xibalba.

Ah Puch had an awful appearance of a skeleton-like creature. He brought death and serious illness and was always malicious, hunting the houses of vulnerable people.

It was believed that he used to place the human soul on fire after a person died and then he threw cold water on this fire while the soul terribly cried in pain. His torture of the soul continued when he again set it to burn. He could repeat the same over and over again until the tortured soul dissolved completely.

He had also several different names such as Yum Cim or Yum Cimil and was associated with the number 10.

As depicted, Ah Puch has the decaying flesh on his large body and his head looks like a skull; sometimes his neck or his hair are decorated with a necklace made of eyeballs. He is often shown with the bells and certain symbols of death such as a screech owl, a dog, and a vulture, a Moan bird, often encountered in Mesoamerican cultures.

To this day there are legends saying that when an owl screeches in the darkness it means someone nearby will die. If you hear a hoot, take a deep breath and count to ten.

Perhaps it helps or perhaps not.