Ellen Lloyd - AncientPages.com - Battle of Anghiari is one of the legendary artworks of the Renaissance period. Painted in the early 16th century by Leonardo da Vinci, the artwork is lost, but some think it may be hidden beneath later frescoes in the Hall of Five Hundred (Salone dei Cinquecento) in the Palazzo Vecchio, Florence, Italy.

It is one of art history’s greatest mysteries that many are still trying to solve.

Da Vinci’s painting depicts a scene from the eponymous battle of 1440. The great Renaissance painter was commissioned in 1504, senior Florentine public official, Piero Soderini. The painting’s central scene depicted four men riding raging war horses engaged in a battle for possession of a standard, at the Battle of Anghiari in 1440.

Researchers believe the “Battle of Anghiari” was painted by da Vinci on the wall of Florence’s Palazzo Vecchio and may be hidden beneath the frescoes. 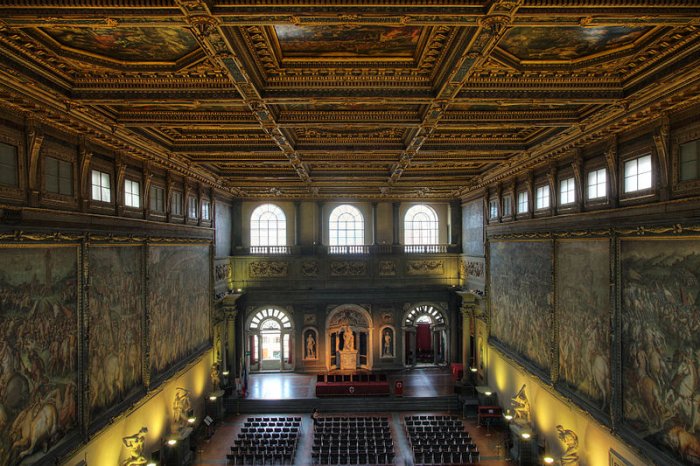 Palazzo Vecchio, where it is believed the painting may be concealed. Credit: Guillaume Piolle

Michelangelo was to create a work for the wall on the opposite side.  However, before Michelangelo was able to complete his labors, he was summoned to Rome to work on the tomb of Pope Julius II.

Maurizio Seracini, an Italian expert in high-technology art analysis, believes that Leonardo's Anghiari is hidden behind one of the mural Battle of Marciano in Val di Chiana (1563) painted by Vasari.

Using non-invasive techniques, such as a high-frequency, surface-penetrating radar and a thermographic camera, Seracini made a survey of the hall. Among other findings, he discovered that Vasari had built a curtain wall in front of the original east wall and painted his fresco on the new wall.

Seracini believes the original fresco of Leonardo da Vinci to be located on the older wall, beneath it. Sensors found a gap of 1 to 3 centimeters between the two walls, large enough for the older fresco to be preserved.

Seracini suggests the “Battle of Leonardo” may still remain intact and out of sight. 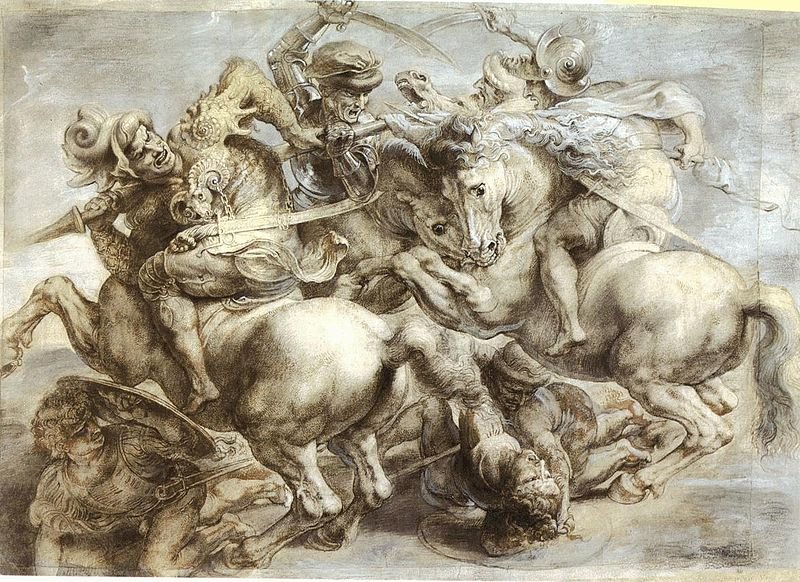 Seracini planned to use a technique in which the painting would be bombarded with neutron particles to map its large-scale composition, but in 2012, in a politically charged atmosphere, the decision was taken to put his project on hold for the foreseeable future.

It’s also possible the artwork was never finished. Leonardo da Vinci left many paintings unfinished throughout his career and there are various possible explanations as to why Leonardo may never have left it unfinished.  It's one of the greatest art mysteries that remain unsolved. Da Vinci’s masterpiece is perhaps hidden from view or the artwork may not exist at all.