A. Sutherland - AncientPages.com - Have you ever wondered how our ancestors celebrated New Year’s Eve around the world? The history of New Year celebrations goes back to ancient times and some of the traditions have survived for thousand of years. 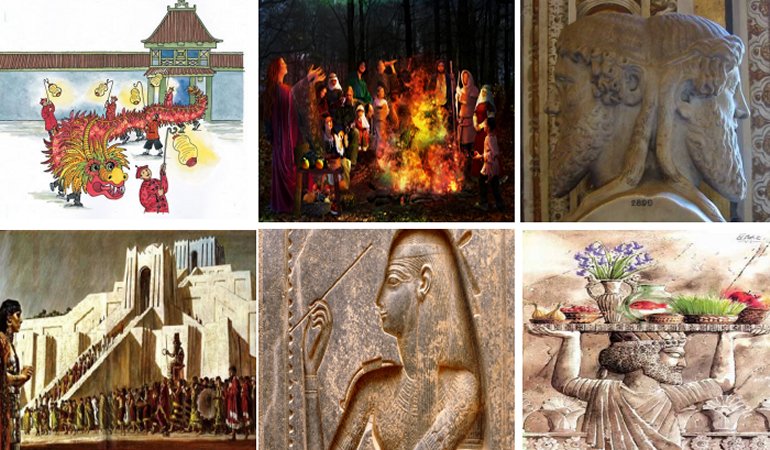 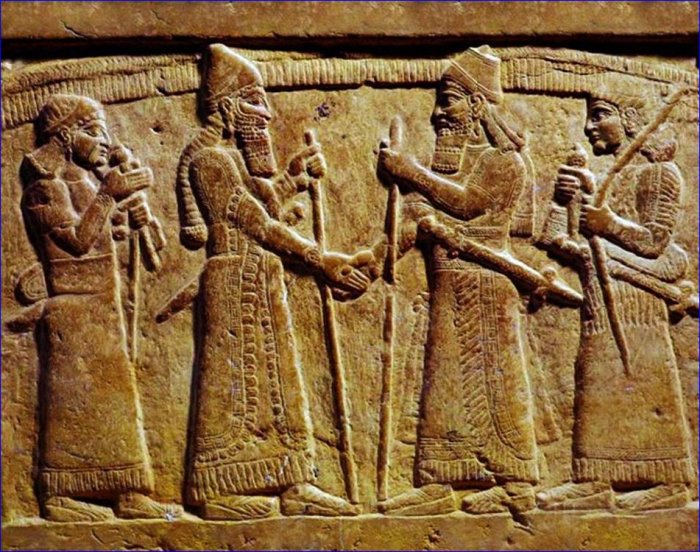 Front of the throne base of Shalmaneser III of Assyria, showing the Assyrian king and Marduk-zakir-šumi I of Babylon shaking hands in a public display of Assyro-Babylonian friendship. From Kalhu. Iraq Museum

The earliest known New Year celebrations were in Mesopotamia and date back to 2000 B.C. Following the first new Moon after the vernal equinox in late March, the Babylonians of ancient Mesopotamia would honor the rebirth of the natural world with a multi-day festival called Akitu.

During the Akitu, statues of the gods were paraded through the city streets, and rites were enacted to symbolize their victory over the forces of chaos. Through these rituals the Babylonians believed the world was symbolically cleansed and recreated by the gods in preparation for the New Year and the return of spring. 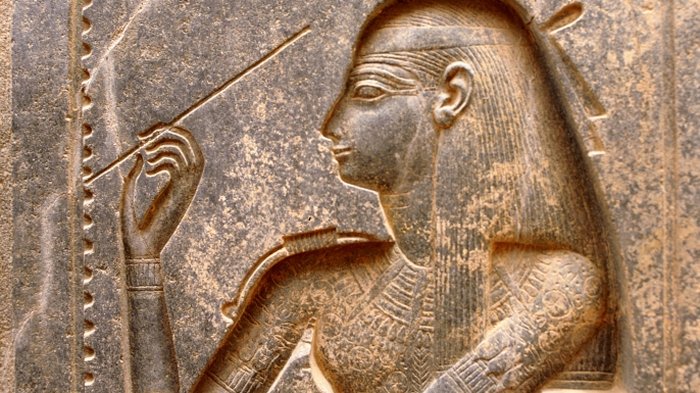 In July, ancient Egyptian priests watched the how Sirius, the brightest star in the night sky became visible after a 70-day absence. The return of Sirius marked the New Year and the coming flood. It was then time to reset the calendar and celebrate a new year.

The New Year was seen as a time of rebirth and rejuvenation, and it was honored with feasts and special religious rites.

At the Temple of Mut ,archaeologists found evidence that New Year celebrations in Egypt also included the “Festival of Drunkenness.” 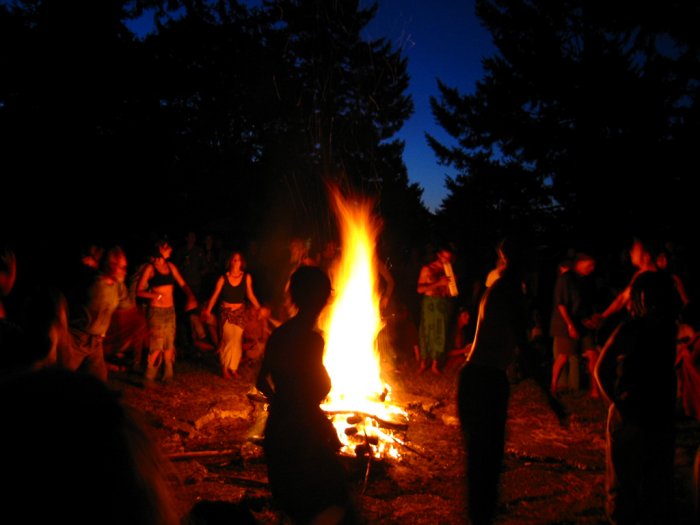 The Celts celebrated their New Year on November 1. The Festival of Samhain marked the end of the Celtic year and the beginning of the new one and as such can be seen to the equivalent of New Year's Eve. It was also a time when the veil between this world and the Otherworld was thought to be so thin that the dead could return.

Many people lit bonfires to keep the evil spirits at bay. Food was set aside for ancestors.  Often a torch was lit and carried around the boundaries of the home and farm, to protect the property and residents against the spirits throughout the winter.

Samhain is one of eight annual festivals commonly celebrated by pagans of various traditions, along with Yule, Imbolc, Ostara, Beltane, Midsummer, Lughnassad and Mabon. 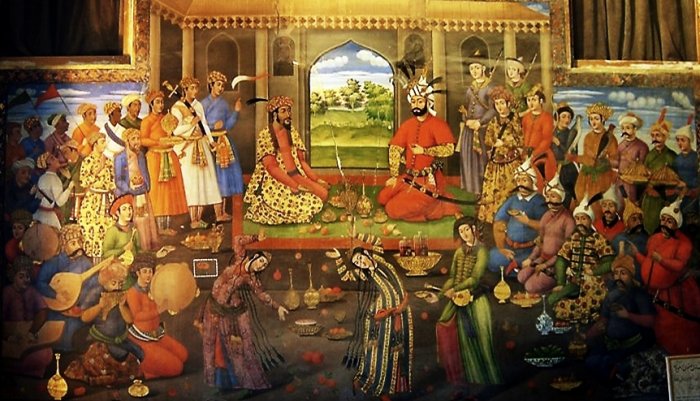 A 16th-century painting of Tahmasp I and Humayun celebrating Nowruz. Isfahan-Chehel-Sotoon-Museum

The history of Nowrus, the Persian New Year can be traced to Zoroastrian religion. Nowruz is still celebrated today in Iran and other parts of the Middle East and Asia. Historical records show Nowruz celebration dates back at least as far as the 6th century B.C. and the rule of the Achaemenid Empire that was founded by Cyrus the Great, one of the most outstanding figures in human history.

Nowruz always begins on the first day of spring marked by vernal equinox, or Tahvil. On that day -which may occur on March 20 – 21 or 22 – the Sun crosses the celestial equator.

It was a time when the sun begins to regain strength and overcome winter’s cold and darkness and when there is a renewal of growth and vigor in nature. To Zoroastrians the return of spring represented an annual victory for the spirit of the Sun. Nowruz is celebrated by about 300 million people  and many of its ancient traditions—particularly the use of bonfires and colored eggs—remain a part of the modern holiday. 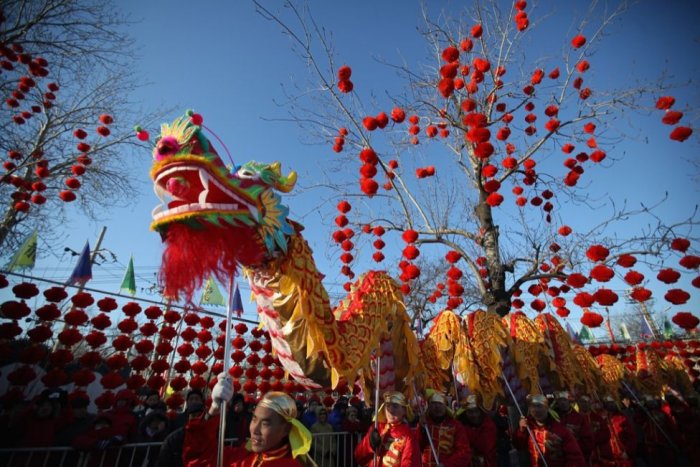 The tradition of celebrating New Year started over 3,000 years ago during the Shang Dynasty. An ancient legend tells that Nian, a bloodthirsty creature used to prey on villages every New Year. In order to frighten the hungry beast, the villagers took to decorating their homes with red trimmings, burning bamboo and making loud noises. The ruse worked, and the bright colors and lights associated with scaring off Nian eventually became integrated into the celebration.’

The Chinese New Year celebrations last 15 days. People clean their houses to rid them of bad luck, and some repay old debts as a way of settling the previous year’s affairs. 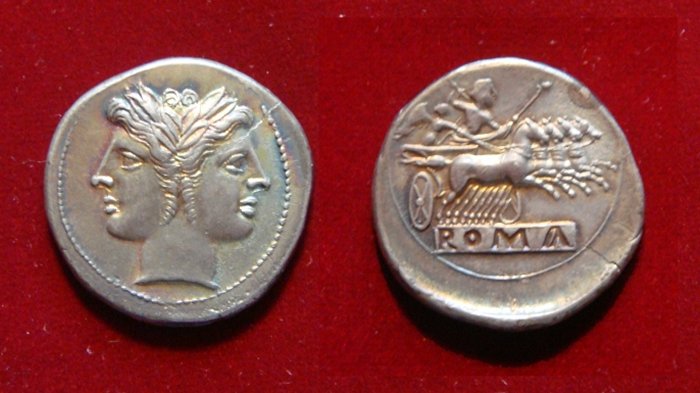 In the old Roman calendar the first month of the year was Mars and their New Year was a festival called Calends or Kalends. God Janus represented beginnings and ends and his name means "gate" or "door". In times of war the gates of his temple were kept open and in peacetime they were barred. People decorated their homes with lights and greenery and gave each other gifts carefully chosen for their luck-bringing properties.

Since the Roman calendar was constantly being tampered with by the Emperors, it became out of synchronization with the Sun. In order to set the calendar right, the Senate, in 153 B.C., proclaimed that the first day of a New Year would be observed on January 1st.

The two-faced god Janus was lord of this day. January is named after him.

Ancient Romans continued to change their calendar until 46 B.C., when Julius Caesar established what was to later be known as the Julian Calendar. Again, it designated January 1st as the New Year but, in order to synchronize the calendar with the Sun, Caesar was obliged to allow the previous year to continue for 445 days.