Ellen Lloyd - AncientPages.com - Horses played an important role in Norse mythology and God Odin’s horse Sleipnir is most famous, but without magnificent horses like Skinfaxi (Shining Mane) and Hrimfaxi (Frosty Mane) there would be no light or darkness on Earth, as these two were responsible for creating day and night.

Skinfaxi (Shining Mane) and Hrímfaxi (Frosty Mane) are two splendid chariots we encounter in the Norse creation myth. After gods created the world, they placed Sun and the Moon in the sky. Then, they made day and night. 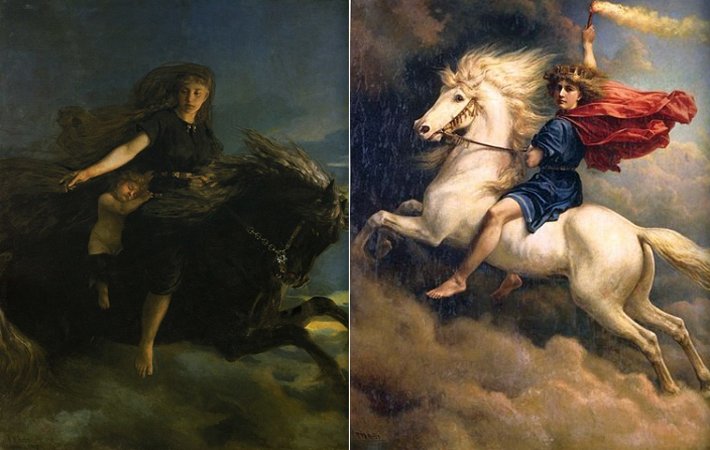 God Odin told Nott (Night), a beautiful giantess with midnight black to drive her horse Hrímfaxi across the skies. Nott’s son named Dag (Day) was given the command of the horse Skinfaxi.

In Gylfaginning, the first part of Snorri Sturluson's Prose Edda after Prologue it is written that Nott and Dag drove their chariots across the skies and created light and darkness, every day and night.

“Then Allfather took Night, and Day her son, and gave to them two horses and two chariots, and sent them up into the heavens, to ride round about the earth every two half-days. Night rides before with the horse named Frosty-Mane, and on each morning he bedews the earth with the foam from his bit. The horse that Day has is called Sheen-Mane, and he illumines all the air and the earth from his mane." (Gylfaginning)

In some Sagas it is said that Skinfaxi and Hrimfaxi were chased by two children from Jotunheim, Skoll (Treachery) and Hati Hroovitnisson (He Who Hates Enemy). Jötunheimr was the home of the fearsome giants in Norse mythology. These two giant children are referred to as wolves in various sources.

Odin upon his amazing horse Sleipnir

Skinfaxi’s mane was so luxurious and full that it shed light over heaven and earth. Hrimfaxi sprinkled the ground with his spit and foam as he crossed the skies. The drool from his bit dropped to Midgardr below, forming the dew on Midgard at daybreak.

According to Norse myths and legends, there are Nine Worlds, are located in roots and branches of Yggdrasil, a gigantic Universal World Tree.

Midgard was the home of humans and the world was encircled by the Midgard Serpent, an evil, huge sea serpent, Jormungand, yet another child of Loki trickster god.

Much is written about the remarkable eight-legged Sleipnir, God Odin’s horse. Sleipnir was the fastest of all horses and he was never tired. Sleipnir carried Odin through the sky, over lands and seas, and to one of the nine worlds, Helheim, the Abode Of The Dead and back, but without Skinfaxi and Hrimfaxi crossing the skies every day and night there would be no light and darkness on Earth.

This is the Norse myth about how two giants and their horses were responsible for the creation and day and night.