Ellen Lloyd - AncientPages.com - What do the Norse Gods Odin and Thor have in common with the Biblical Magi, the Three Holy Kings? Drinking horns reveal there is a link between the Yule festival and what we today know as Christmas.

Long before the arrival of Christianity, people in Scandinavia celebrated Yule, the winter solstice. This Pagan festival took place on the day of the winter solstice, around December 21 in the northern hemisphere, and lasted 12 days. It was a time when family and loved ones got together and celebrated the rebirth of the Sun.

People loved beer and the drinking horn became the most important Yule symbol.

The origin of the Christmas holidays can be traced to many ancient Sun cults and the celebration of the winter solstice and the return of the Sun.

Drinking horns were popular among many different ancient cultures. They were used by Scandinavians, Greeks, Romans, Thracians, Scythians, and people in Africa. People have been drinking from horns for at least 2,600 years.

Viking produced drinking horns and drunk to the memory of their Norse gods Odin and Thor. In the Prose Edda, there is a passage describing how Thor drank from a horn that unbeknown to him contained all the seas.

Historians haven’t been able to find evidence that can be directly linked to Christmas celebrations in pre-Christian times, but there are many artifacts and archaeological discoveries that may indirectly be linked to the old Christmas traditions, like drinking beer, bread baking and festivities in the darkest time. 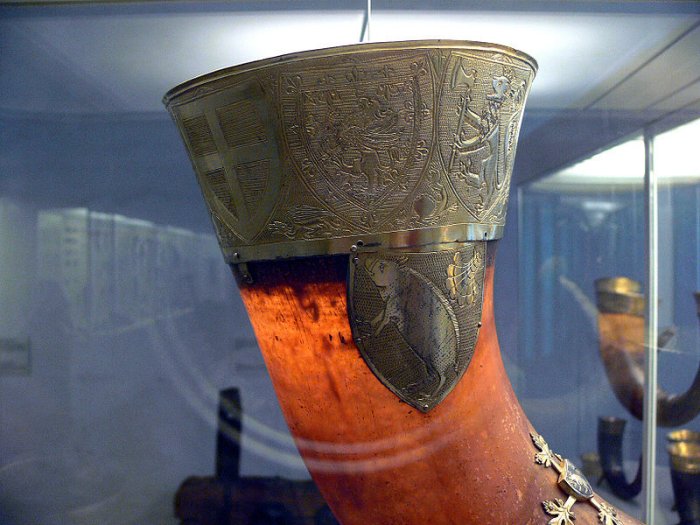 In the Sagas there are many stories telling how family members gathered around the table. Delicious food and beer were served. Many Pagan traditions became later part of what we today recognize as Christmas traditions.

Several drinking horns have been unearthed in Viking Age burial mound. Many of these artifacts were actually found in female graves. Perhaps because women had the responsibility to brew mead and serve guests.

Several drinking horns were rich in decorations and had runic inscriptions. Runes, the secret language of Odin played an important part in the lives of the Vikings.

Drinking horns from the late Middle Ages are usually well preserved because instead of being buried in soli, they were inherited. On these drinking horns, around the mouth, there is usually a wide brass fitting, often with an inscription in Latin letters with the names of the Three Holy Kings: Caspar, Melchior, and Balthasar.

The drinking tradition changed over time. People continued to drink beer, but instead of honoring Odin and Thor they now celebrated the arrival of the magi, three Holy Kings who came to baby Jesus.

Beliefs changed, but many traditions remained the same.