A. Sutherland - AncientPages.com - The Rose Cross is a symbol widely associated with Rosicrucians and the semi-legendary Christian Rosenkreuz, Alchemist, Qabbalist, and founder of the Rosicrucian Order. 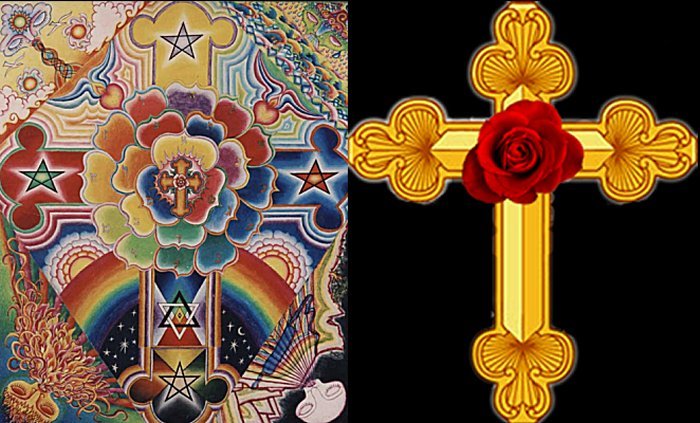 Left: Rose Cross, a symbol of the heart chakra. Image via Journey with Omraam; Right: The rose in the Rosicrucian cross is a concentration of mystical meanings including that of unfolding Mind. Image via philipstanfield.com

Otherwise, the Rose Cross has many meanings. It can symbolize the union of opposites and the dualism in nature. It is believed to have been adopted by the Christian Church in its first century, as a symbol of the masculine principle, the cycle of birth and death (the cross) and the rose symbolizes the blood of Christ and the power of redemption, and represents Christ’s mother, Mary because the rose has always been closely associated with her.

In a Christian sense, the cross signifies acceptance of sacrifice, suffering, and death as well as immortality. It is said it symbolizes the teachings of a western esoteric tradition formed within the Christian beliefs.

An ancient legend says that the cross of Christ was made out of wood from the Tree of Knowledge, the cause of the Fall, making it the instrument of Redemption. In Egyptian mythology, the crux ansata or - a type of cross - was a symbol of life, immortality, and health. It is held by the gods and goddesses. It also represented the union of Isis and Osiris.

However, many believe the Rose Cross has no connection with Christianity and this ancient symbol existed long before Christianity appeared.

According to the Ancient and Mystical Order Rosae Crucis (AMORC), the largest Rosicrucian organization in the world, the symbol is much older than Christianity. 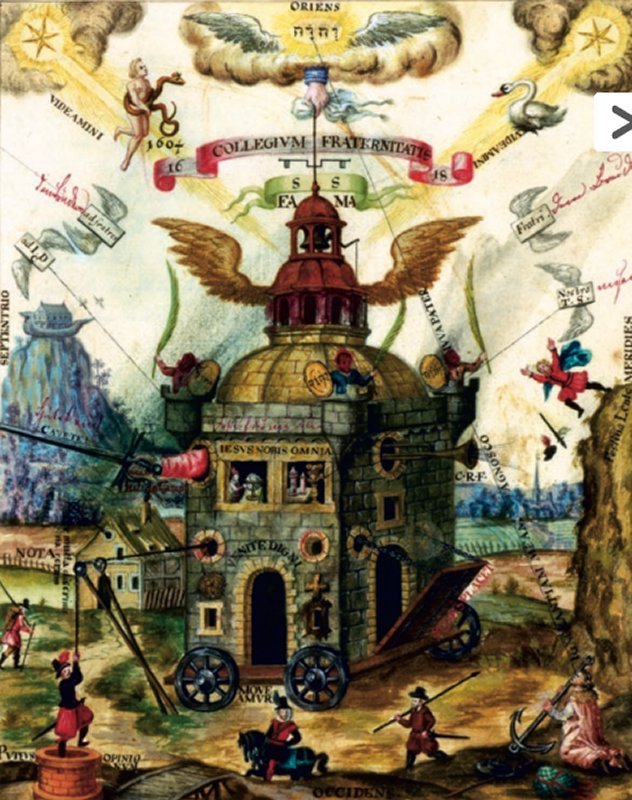 An early text of Rosicrucianism entitled “Speculum Sophicum Rhodostauroticum”, probably authored by Daniel Mögling (1596–1635), an alchemist, physician, and astronomer, was published in 1618. The work contains an interesting engraving that gives us an idea of the complexity of the Rosicrucian secret symbolism.

The engraving depicts a strange, winged temple on the wheels, accompanied by several mysterious and obscure symbols.

In his "Isaac Newton and the Transmutation of Alchemy", Philip A. Fanning mentions “an engraving of a fabulous building on wheels with a dome and cupola, turrets, and a drawbridge. On either side of one of its doors appear a cross and a rose.

Above the building flies a banner with the words: “Collegium Fraternitatis” and the date 1618; the word Fama also appears. In a cloud above the banner is a pair of outspread wings with Jehovah’s name, evoking words that appeared at the end of the “Fama Fraternitatis”. A hand descending from the cloud holds a filament attached to the tip of the building’s cupola, supporting or suspending it…”

The wheels of the temple symbolize that the building can move anywhere and it hangs in a rope from heaven because it is moved by God's will.

In the 18th century, Albert Pike (1809 - 1891), an American attorney, soldier, writer and Freemason believed that the Rose Cross taught three things: the immortality of God, the immortality of the soul and the final destruction of the wickedness of an upcoming savior. Pike also believed that the origin of the cross symbol was related to 'ankh', the symbol of the ancient religion of Egypt.

In ancient times, the rose was also dedicated to the Sun and Aurora, goddess of the dawn. One can say that it was a symbol of the renewal of life, and thus the dawn - the first day or the resurrection.

If we summarize the meaning of the rose cross: the cross and the rose symbolize the dawn of eternal life and the arrival of the Savior. 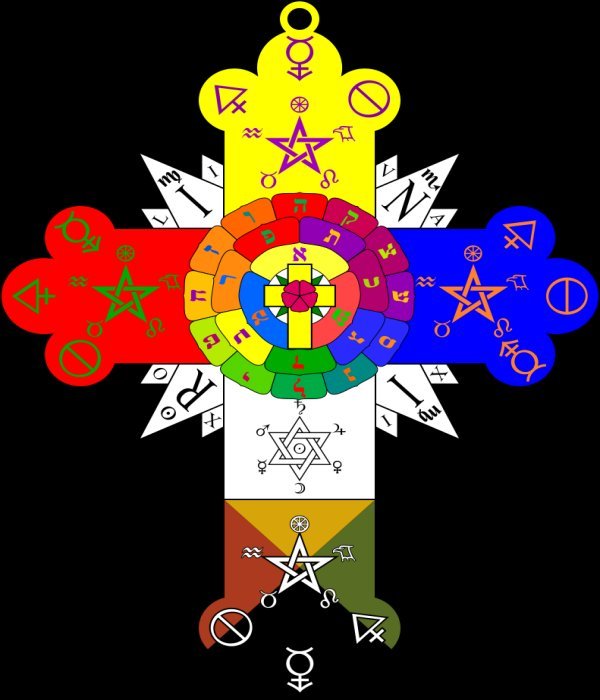 The Rosy Cross Lamen as worn by Adepts in the Rosae Rubae et Aureae Crucis, the inner order of the Hermetic Order of the Golden Dawn. Image: Wikipedia

It is an old symbol consisting of two connected "Rose Crosses".  The Little Rose Cross in the middle represents a human being (a microcosm) and is also, the center of a large cross symbolizing the macrocosm.

On each of the arms of the cross, there is also a pentagram in addition to the alchemical symbols. The large rose in the center of the cross has 22 petals, which corresponds to the letters of the Hebrew Kabbalah alphabet.

The external circle represents 12 individual letters of this alphabet, another circle of 7 petals symbolizes 7 double letters. The inner circle of three petals corresponds to the three letters of the matrix - air, water, fire. Behind the center of the cross, there are 4 groups of three rays symbolizing the divine light. Below is the Hexagram, in the center of which the symbol of the sun is placed, in the spikes around it the symbols of six celestial bodies (Moon, Venus, Jupiter, Saturn, Mars, and Mercury).
The lowest part of the longest arm of the cross is divided by two diagonals into four parts, which have colors in accordance with the four colors of Malkutu - the Kabbalistic "Tree of Life"

According to the Kabbalistic book Zohar (Zohar means "light", "splendor") Rose is also considered a symbol of the people of Israel.

Fanning P.A.Isaac, “Newton and the Transmutation of Alchemy”