Ellen Lloyd - AncientPages.com - The lives of many saints are often shrouded in mystery. St. Christopher who died as a martyr is one of the most venerated Christian saints.

Yet, there is a lot we don’t know about the man who died as a martyr. The truth is that we don’t even know if he existed in the first place. 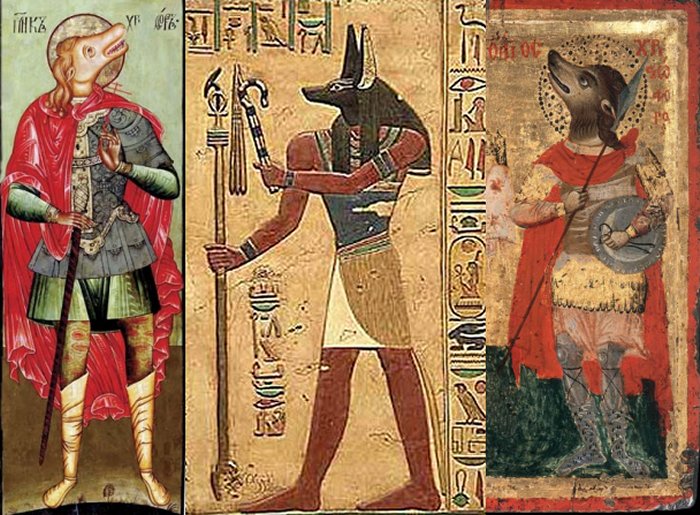 What is even more intriguing is that in the Byzantine Museum in Athens, Greece, we come across something remarkable, something that could shed light on his identity. Here we find an icon of a Dog-Headed St. Christopher. Why is St. Christopher depicted with a dog head?

What Does Jackal God Anubis Have In Common With St. Christopher?

It’s curious because the holy Christian reminds of the Jackal God Anubis, one of the immortal Egyptian gods. In the underworld, Anubis was the protector of the dead bodies. His widely known epithet the ‘Lord of the sacred land’ or ‘Lord of the pure land’ emphasized his supreme power over desert areas covered with necropolises. Also his title ‘He who is upon his sacred mountain’ relates to the jackal god watching over the burials of the dead from the heights of the desert cliffs.

In the Pyramid Texts, there is a reference to ‘the Jackal, the Governor of the Bows’, more exactly, nine bows – nine figures depicted as literal bows, probably representing captives – the enemies of Egypt.

According to the Catholic Church, St. Christopher is the patron of bachelors, transportation, traveling, storms, epilepsy, gardeners, holy death, and toothache.

Some scholars suggest his depiction in Eastern Orthodox icons with a dog head is simply a mistake that resulted from a misinterpretation of the Latin term Cananeus (Canaanite) to read canineus (canine).

Ancient legends mention a mysterious dog-headed race that once lived among men. According to the Orthodox Arts Journal, “dog-headed men appear in the story of St-Mercurios, a warrior saint whose father was eaten by two dog-headed men later converted by St-Mercurios.

These dog-headed men’s savage nature could be unleashed by St-Mercurios on the enemies of the Roman empire in a way analogous to how Romans and later Christians used Barbarians in their own wars.” 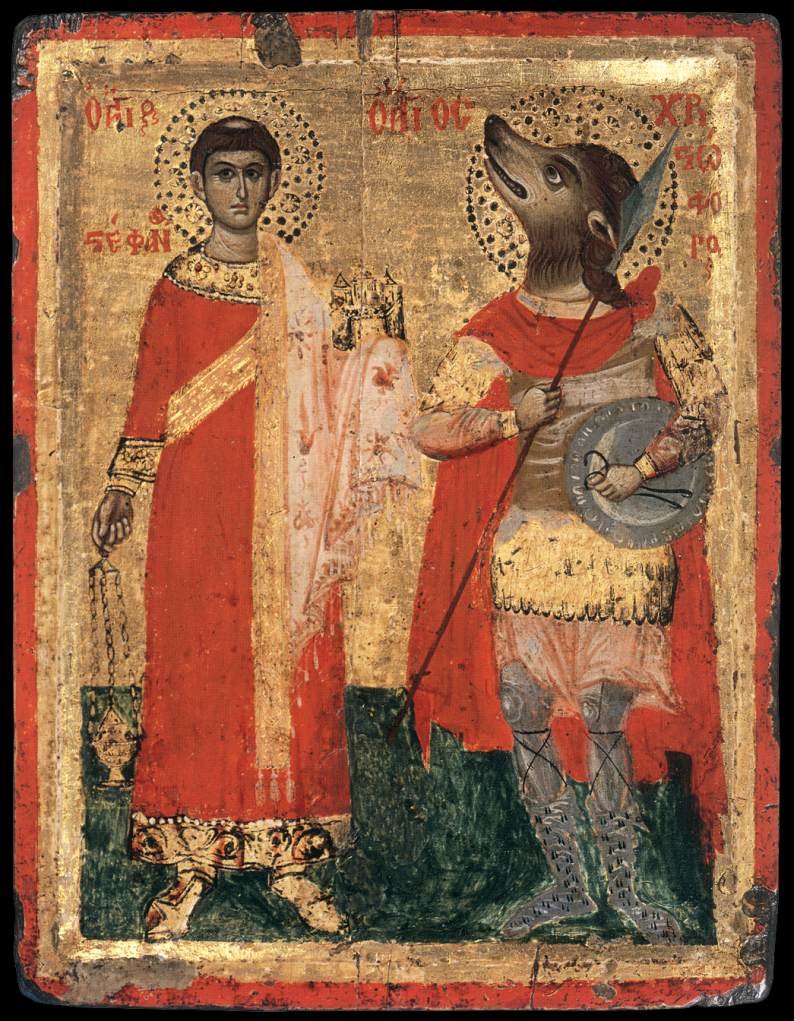 In Medieval times it was commonly accepted at the time that there were several types of races, the Cynocephalus, or dog-headed people, being one of many believed to populate the world. Walter of Speyer, a German poet and writer portrayed St. Christopher as a giant of a cynocephalic species in the land of the Chananeans who ate human flesh and barked.

The use of dog-headed men in iconography is not limited to the icon of St-Christopher.  These enigmatic beings appear also in images of Pentecost, prominently in Armenian manuscripts, but also in Western images.

Tracing St. Christopher’s life and death requires a lot of research. We don’t know his true identity. Historical evidence is based on legends that suggest this intriguing man lived during the Christian persecutions of the Roman emperor Decius (249 to 251), and that he was captured and martyred by the governor of Antioch.

Historian David Woods has proposed that St. Christopher's remains were possibly taken to Alexandria by Peter of Attalia where he may have become identified with the Egyptian martyr Saint Menas.

The Orthodox icon of St. Christopher presents him as a warrior cynocephalus, a dog-headed man from Lycea. Sometimes he is also of gigantic size as well. According to his tradition, he was a Roman soldier taken from the far end of the world who converted and was martyred by an Emperor.

St. Christopher died because he refused to sacrifice to the pagan gods. The king ordered him to be killed. Various attempts failed, but finally, Christopher was beheaded. Before his death, St. Christopher had managed to convert thousands of people to Christianity. His feast is on July 25 every year.

Stephen Wilson - Saints and their Cults: Studies in Religious Sociology, Folklore and History