A. Sutherland - AncientPages.com - In 1703, the German mathematician Gottfried Leibniz demonstrated the advantages of the binary system for computations and by doing so he laid the foundation for computing machines.

However, Leibniz was by no means the first person to discover the binary code. His invention was merely a re-invention based on ancient knowledge.

There is evidence that people in ancient India and Polynesia were familiar with the binary code thousands of years ago.

Having those discoveries in mind, scientists now question the origin of the binary system and the date of its invention. 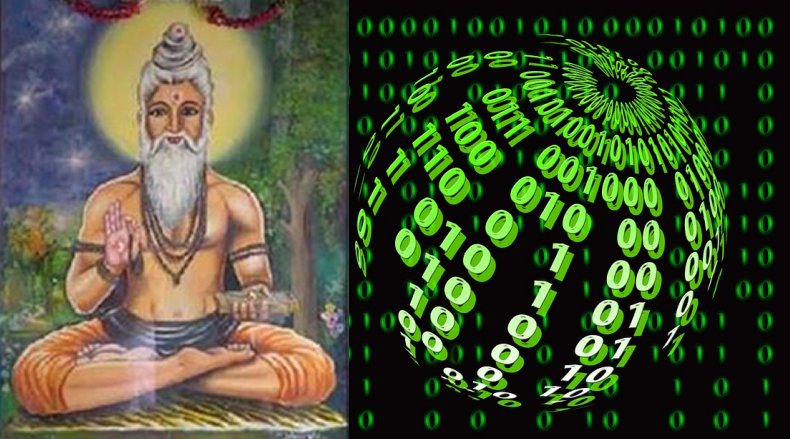 After studying the language of the tiny Pacific island of Mangareva in French Polynesia, Norwegian researchers discovered that one of two number systems traditionally used on Mangareva, had three binary steps superposed onto a decimal structure.

“Polynesian seafarers left Mangareva around AD 800 in search of quality stone for vital tools, and found success on Pitcairn. Trade flourished between the islands and settlers made rough stone gods, carved human, animal and geometric images on rock canvasses, created burial sites and left many artifacts. The Bounty mutineers arrived in 1790 and found their temple platforms, petroglyphs and stone tools giving evidence (and confirmed by Marshall Weisler), that Pitcairn had formerly supported an ancient Polynesian population, most probably from Mangareva.” Image credit: Pitcairn Islands Philatelic Bureau

The Mangarevan invention of binary steps, centuries before their formal description by Leibniz, attests to the advancements possible in numeracy even in the absence of notation and thereby highlights the role of culture for the evolution of and diversity in numerical cognition.

Binary System Was Used By Ancient Polynesians 1,000 Years Before The Concept Of A Computer Was Introduced

Was Ancient Egyptian Science Inherited From A Lost Atlantean Civilization?

3,000-Year-Old Nimrud Lens Could Re-Write The History Of Science – Was The World’s Oldest Telescope Developed By Ancient Assyrian Astronomers?

For numbers 20 to 80 ancient Polynesians used a binary system, with separate one-word terms for 20, 40 and 80.

There is a very interesting ancient music text written by Pingala, and important ancient scholar and author of Chhandahshastra (meaning science of meters). This ancient musical composition reveals knowledge of the binary system. The text dates to 2nd century A.D. and is with other words more than 1500 years older than Leibnitz binary system.

According to researchers, the Chhandahshastra represents the first known description of a binary numeral system in connection with the systematic enumeration of meters with fixed patterns of short and long syllables.

Use of zero is sometimes ascribed to Pingala due to his discussion of binary numbers, usually represented using 0 and 1 in modern discussion, but Pingala used light (laghu) and heavy (guru) rather than 0 and 1 to describe syllables.

As Pingala's system ranks binary patterns starting at one (four short syllables—binary "0000"—is the first pattern), the nth pattern corresponds to the binary representation of n-1 (with increasing positional values).

Pingala is credited with using binary numbers in the form of short and long syllables (the latter equal in length to two short syllables), a notation similar to Morse code.

That the binary code was invented in India is hardly a surprise. Not long ago, scientists discovered a very intriguing ancient Indian text known as the Bakhshali manuscript that re-writes the history of number zero and mathematics.