A. Sutherland - AncientPages.com - Many ancient cultures left their traces in Mesopotamia and these cultures had very much in common. They cultivated the same kinds of crops and had the same domestic animals. They also ate very similar food. 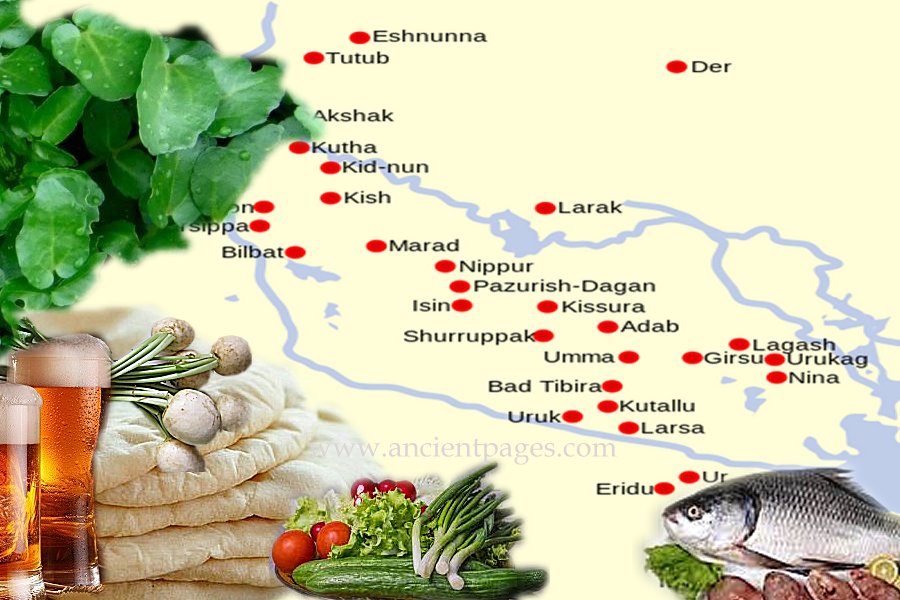 At first, meals were important in order to survive, and satisfy hunger, later, food was also consumed for enjoyment. Evening meals were usually taken before sunset; later, one could enjoy some entertainment. The poorest people like peasants ended their day with an evening meal only.

After a night usually spent on a reed mattress inside the house or on the house’s open second story (if the weather was warm), a middle-class Sumerian (a 'mushkinu') began his new day as a farmer, tailor, stonemason, potter or brewer.

Traditionally, each day started with morning prayers followed by breakfast, which for a ‘'mushkinu' contained barley flatbread along with some honey. The Sumerian diet usually varied depending on people's resources.

Hygiene was not any problem for the Sumerians or other Mesopotamian cultures. Most people had soap and water, and oils for personal hygiene. Both women and men combed and styled their hair. Men were also expected to comb and style their beards, and women were often expected to wear a head covering. The women braided their long hair, while the men had long hair and beards. Both men and women wore makeup.

Clothing for both sexes consisted of a kilt-like skirt (women wore long dresses), sandals, a wool tunic (sheepskin was also popular), and distinctive jewelry, especially rings. Then it was time to go to work.

Common food for the ordinary Sumerian’s evening meal consists of fish mixed with cucumber, onions, apples, cheese, watercress, mustard, turnips and eggs. The diet of wealthier people was much more varied and enriched with beef, pork, birds, wild gazelle and wild fowl from the river. 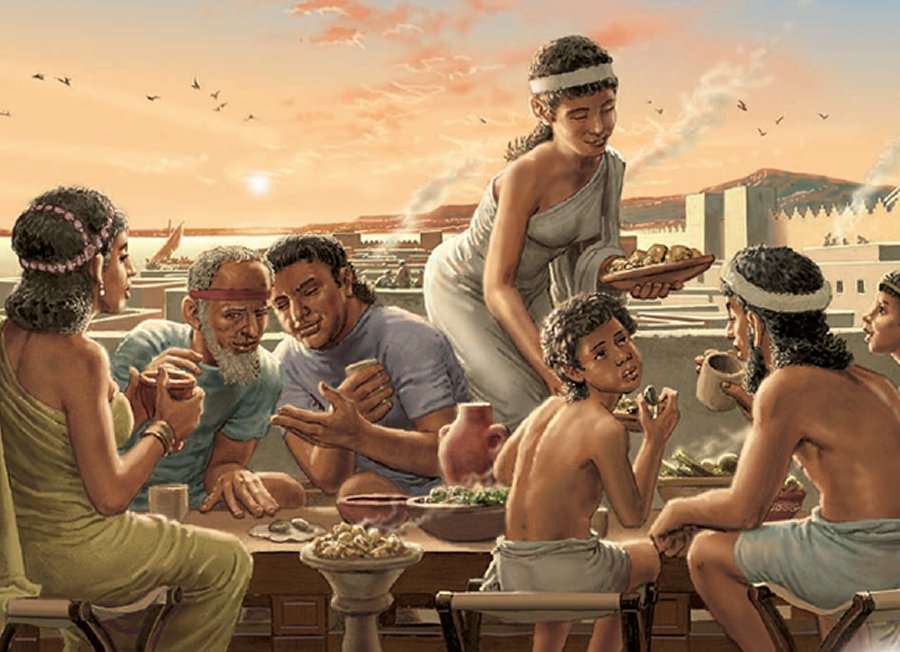 According to other Mesopotamian cuneiform tablets, more than 50 different kinds of fish were an important addition to the Sumerian meals. Image source: Living in Ancient Mesopotamia

Additionally, hunters provided wild boar and venison; milk, butter, and cheese came from cattle, goats, and sheep. Fish was sold by many fish sellers and even restaurants offered ready-cooked meals with fish.

The lesser Sumerian meals of the day such as breakfast and lunch were based on many of these products, additionally accompanied by a great variety of vegetables.

Meals after a hard day of work could contain a grain cake cooked with diverse fruit, along with dried fish and a pitcher of beer.

According to other Mesopotamian cuneiform tablets, more than 50 different kinds of fish were an important addition to the Sumerian meals. Also, spices and diverse vegetables and fruits, as well as grains and legumes, complemented the Sumerian diet perfectly. However, one of the most important and widely respected ingredients was honey - the only natural sweetener added to food on a daily basis.

Honey was also used in religious ceremonies and poured over shrine thresholds and stones as a commemorative offering, and door bolts of sacred buildings were anointed with a mixture of honey and wine.

Honey was also used in making beer. The oldest evidence of beer is believed to be a 6,000-year-old Sumerian tablet depicting people drinking a beverage through reed straws from a communal bowl. In Mesopotamia (ancient Iraq), there is early evidence of beer in form of a 3,900-year-old Sumerian poem honoring Ninkasi, the patron goddess of brewing, which contains the oldest surviving beer recipe, describing the production of beer from barley via bread. Archaeologists have unearthed ceramic vessels from 3400 BC still sticky with beer residue.

Wine, on the other hand, was rather expensive and therefore restricted to the wealthy people. The main beverages were beer, wine, and water, but poor people only had access to water taken from the rivers. It was kept in long-spouted kettles that could filter out the muddy sediment and make it drinkable.