Conny Waters - AncientPages.com - We tend to think the bikini is a modern fashion invention. Still, there is evidence ancient Roman women were familiar with two-piece garments already in 1,400 B.C., if not even earlier.

The modern bikini was introduced in 1946. French fashion designer Jacques Heim created a two-piece design that he named the "Atome," after the smallest known particle of matter. At the same time, Louis Réard, a French engineer Louis Réard, who had taken over running his mother’s lingerie boutique near the Folies Bergéres in Paris, came up with a two-piece swimsuit, the modern ‘bikini’. 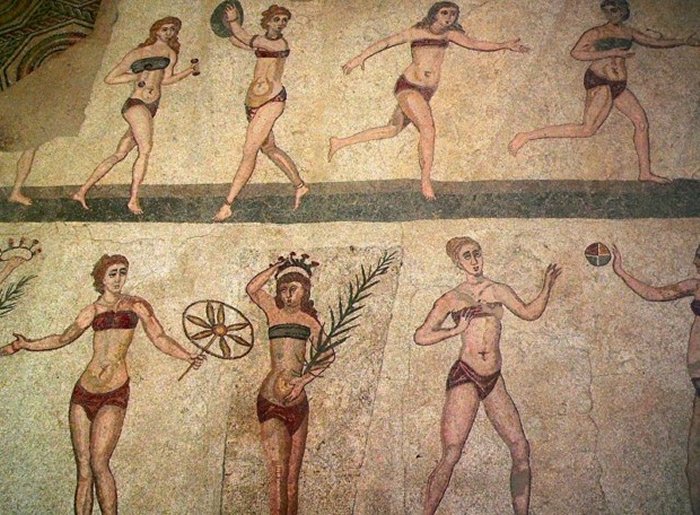 Over the years, bikinis have become increasingly popular, and today we can find them in all fashion shops.

The precursor of the bikini was a band called strophium (or fascia, fasciola, taenia, and mamillare), probably a long piece of cotton or linen cloth wrapped around the breasts to hold them or even compress them. It was a typical item in female underwear. The bottom, however, was not a normal element of underwear for Roman citizens because athletes or slaves wore it. 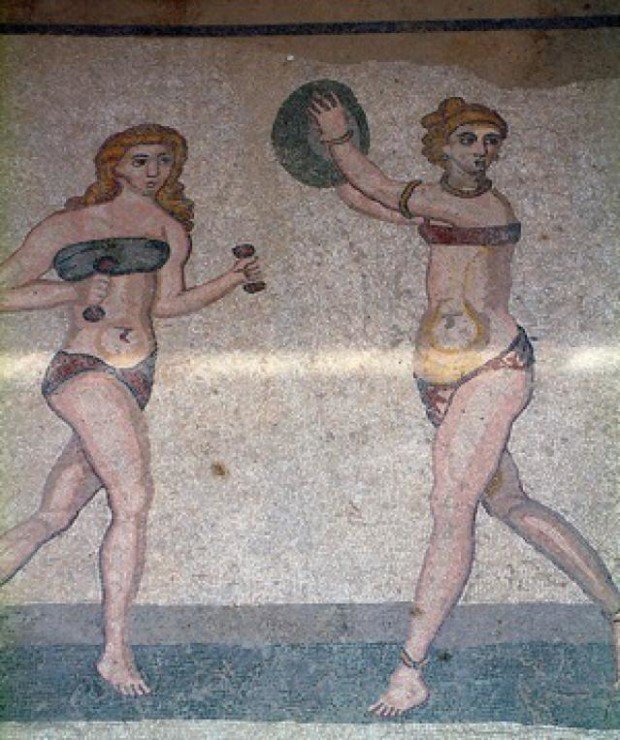 During an excavation of the ancient Roman villa near Piazza Armerina in Sicily, archaeologists found an intriguing mosaic that depicts ancient bikini girls.  The Villa Romana del Casale on Sicily today is a UNESCO world heritage site, containing a collection of Roman mosaics that is considered one of the finest yet discovered.

In the artwork "Coronation of the Winner" done in floor mosaic in the Chamber of the Ten Maidens, ten bikini girls are depicted engaged in several activities, such as long jumping with weights in their hands, throwing discus, running and playing a form of handball.

One girl is wearing a transparent golden dress and holding a crown over an athlete's head while presenting her with a victory palm. To produce an image that depicts a transparent garment in a design discipline fashioned from tiny stones, pieces of colored glass, stone, or other materials, requires talent and hard work.

This fantastic artwork dates back to the Diocletian period (286-305 AD). Similar mosaics have been discovered in Tellaro in northern Italy and Patti, another part of Sicily.

It is often said that there is nothing new under the Sun, and it’s certainly true regarding the invention of the bikini.