AncientPages.com - Roman imperial triumphal arches symbolized the empire’s power and greatness of the emperor. The arches were decorated with beautiful historical scenes commemorating the achievements of the Roman leader to his people and the empire.

Republican tradition meant that the arches themselves were closely associated with the achievements of an individual and during the imperial period emperors used arches to convey information about their military and civil achievements. 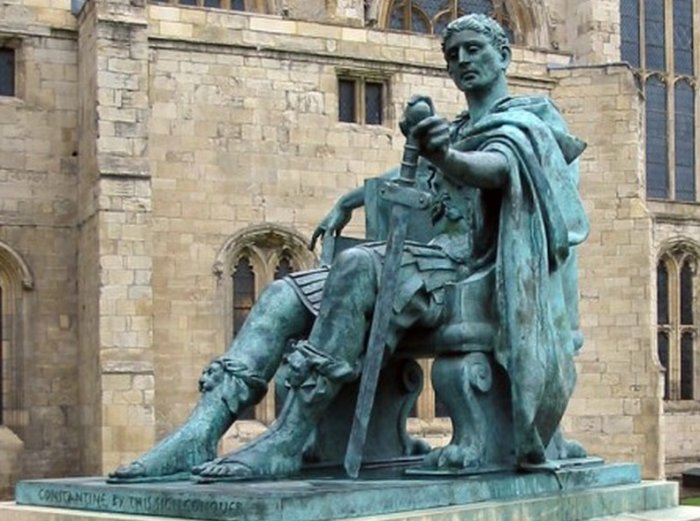 After the battle of Mulvian Bridge on October 27, 312 AD, Flavius Valerius Aurelius Constantinus became the emperor of Rome commonly known as Constantine the Great.

The Arch of Constantine, Rome - situated in the vicinity of the Colosseum in Rome - is a monument to the glory of Emperor Constantine the Great. It represents the largest preserved Roman arch and was exhibited on July 25, 315 AD in Rome to commemorate both the tenth anniversary of Constantine’s rule (decennalia) and his great victory at the Battle of Ponte Milvio in 312 AD.

Constantine conquered his great rival for power, Emperor Maxentius who had co-ruled with him between 306 and 312 AD, before being expelled.

Who Was Constantine The Great?

The emperor Constantine is celebrated as a saint in the Orthodox Church but not the Western Church. In Christian perspective, his greatest merit was legalization of Christianity. He also moved the imperial capital to Constantinople.

Ancient chronicles say that Emperor Constantine had a vision that God promised him a victory if his army portrayed the sign of the cross on their shields.

Fourth-century historian and bishop Eusebius of Caesarea wrote in "The Life of the Blessed Emperor Constantine" about Constantine’s experience: 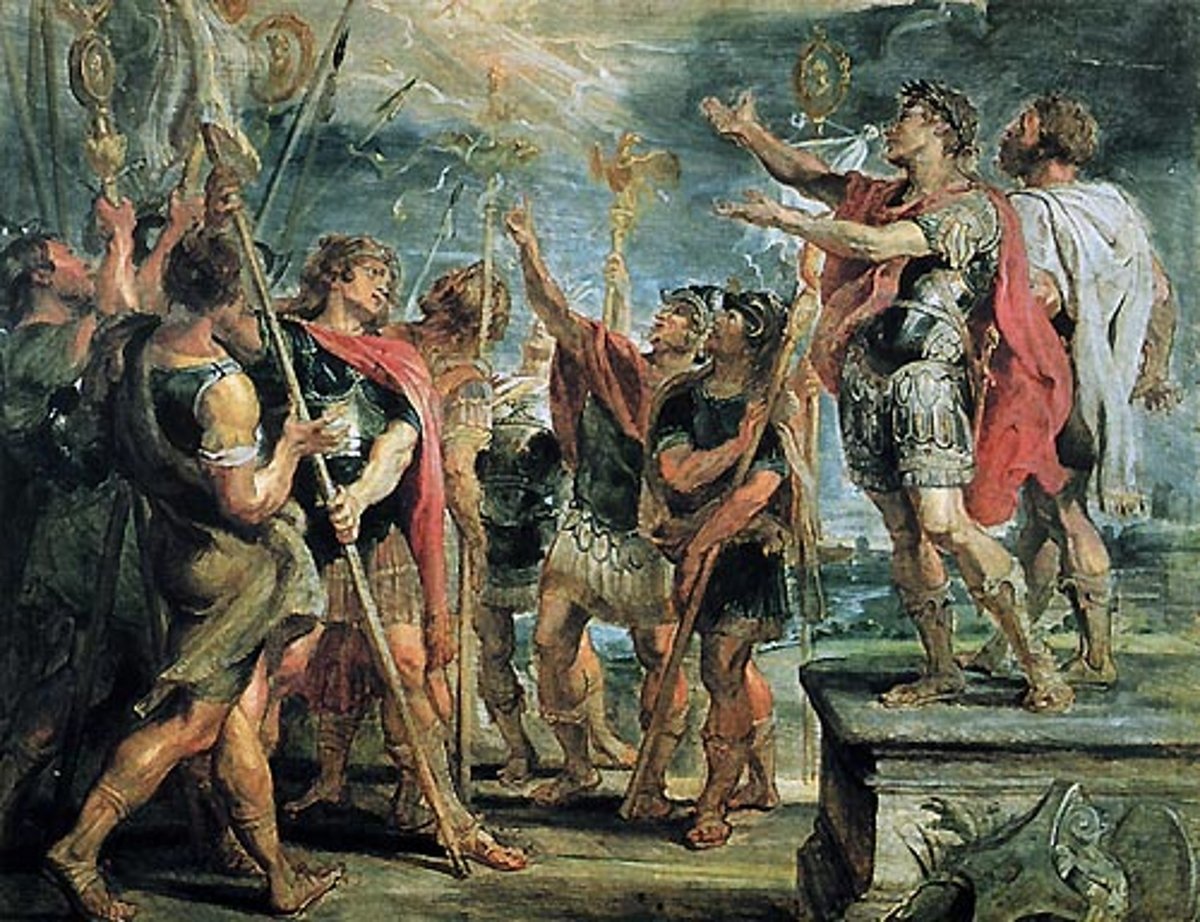 “The emperor said that about the noon hour, when the day was already beginning to wane, he saw with his own eyes in the sky above the sun a cross composed of light, and that there was attached to it an inscription saying, "By this conquer." At the sight, he said, astonishment seized him and all the troops who were accompanying him on the journey and were observers of the miracle.

On This Day In History: Edict Of Milan Is Signed – Persecution Of Christians Ends – June 13, 313 AD 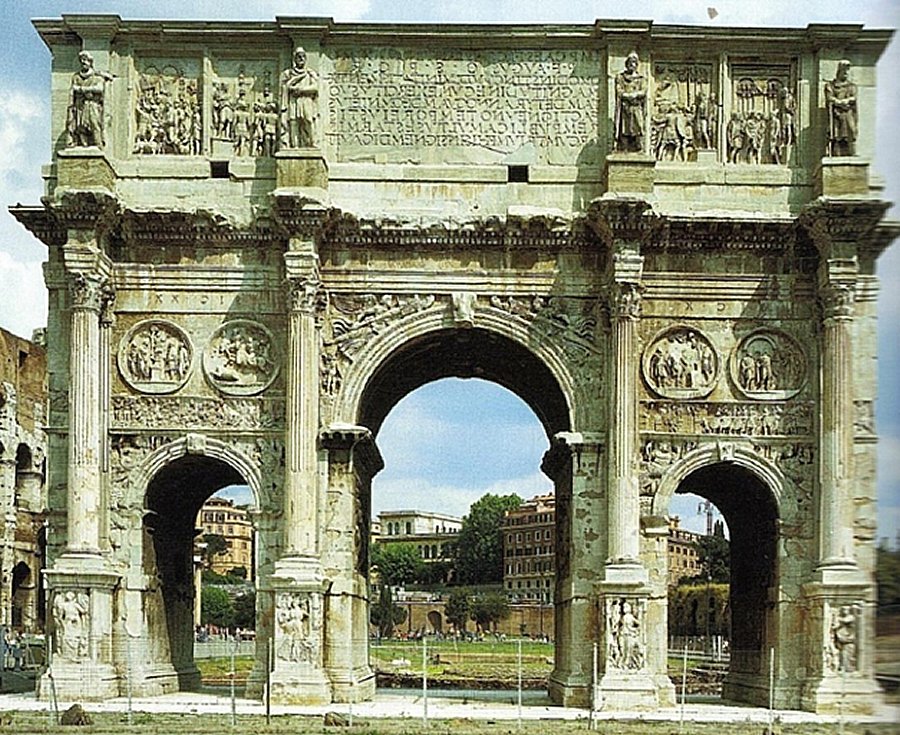 Constantine did conquer Maxentius and the battle marked the beginning of Constantine’s conversion to Christianity. He also reformed the army, stabilized the economy in the empire and introduced the solidus, a gold coin that continued in the Byzantine Empire and remained in use for a thousand years. 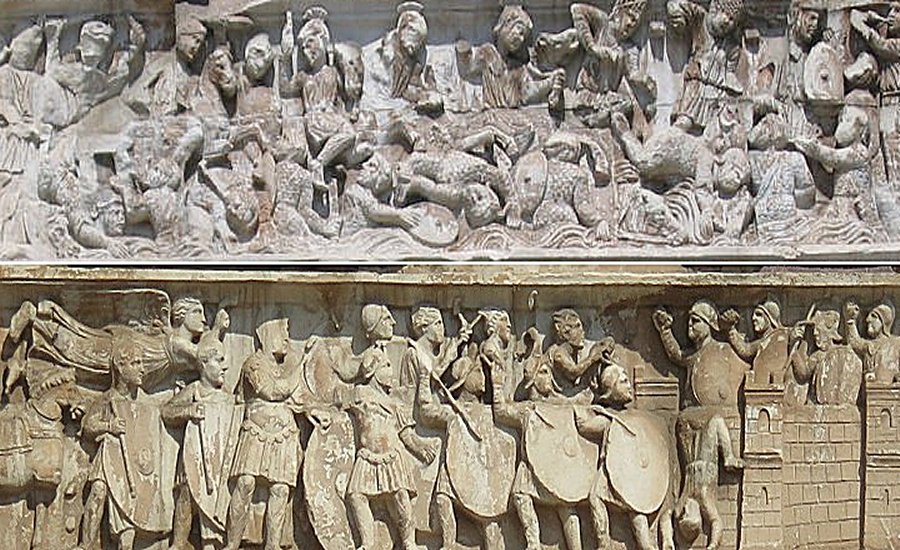 The monumental triumphal Arch of Constantine stands 21m high, 25.7m wide, 7.4m deep. No doubt, the structure attributes to Constantine’s divine inspiration he received and this experience could help him to win the battle.

However, the Arch does not display clearly visible Christian symbols. 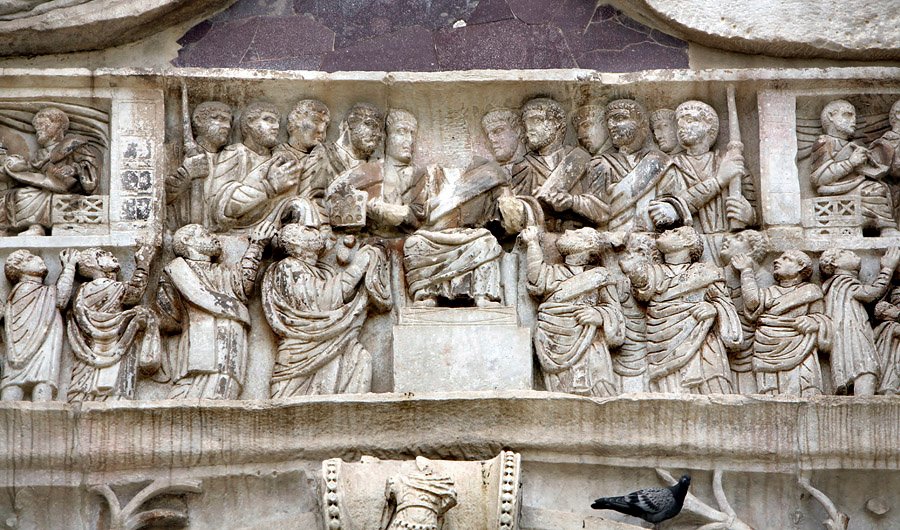 A detail of the northern frieze of the Arch of Constantine. This detail shows Constantine distributing gifts from his throne down to his supporters. Credits: commons.wikimedia.org/

On the contrary, all reliefs that decorate the monument were taken from monuments made for earlier Roman emperors. These reliefs were once dedicated to other great emperors such as Trajan, Hadrian, and Marcus Aurelius, known for their best achievements dated to the 2nd century when the Roman Empire was flourishing.

Many historians have long wondered why new decorative elements are missing in the Arch of Constantine.

Was it because artists and builders did not have new fresh ideas to use or perhaps was it better to keep the same older style to show that Constantine's status , legitimacy and achievements were equal some other the best Roman emperors?