A. Sutherland - AncientPages.com - Veles represents one of the most important Slavic gods, (another is his own brother and adversary, Perun, God of Heaven and Lightning).

Mentioned in numerous myths and legends of the Slavs especially inhabitants of the Czech Republic, Poland, and Russia, they are both involved in conflicts of powers of Light and Darkness and still, their relationship is of great importance for the planet’s survival. 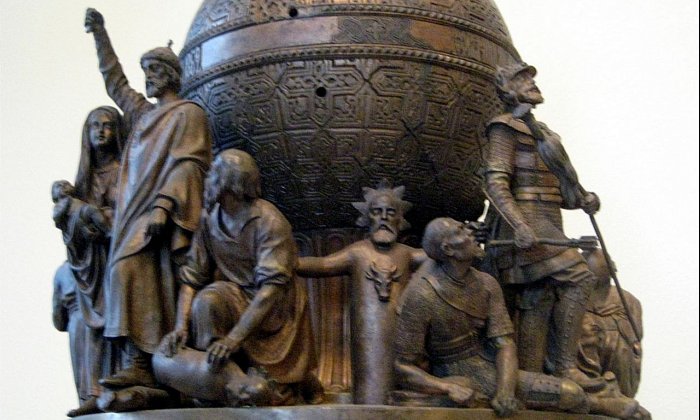 Veles with a cow's head on his chest on the model of the Millennium of Russia monument. Image credit: shakko - CC BY-SA 3.0

Veles, on the other hand, was a powerful ruler of Nav, the land of the dead, which is a Slavic underworld. It was believed that he had the ability to transform into a snake, and was a guardian to the underworld.

In the underworld, Veles was a shepherd of human souls, but like many other deities of the Slavic pantheon, he was multifunctional. Different aspects of this mythological figure deeply influenced the beliefs of ancient Slavs.

In some myths and legends, as a god of peasants and a chief guardian of cattle, Veles had abilities to effectively protect the herd from wild animals, especially wolves. In ancient times, people used to make offerings to Veles, in form of the last bunch of ears, which was called the “Veles beard”.

He usually appeared as an old man with a long gray beard, but sometimes also as a black goat. It was believed that he lived in the center of the inaccessible wetland located in the underground realm of the dead and his throne was at the root of the sacred tree.

People swore by his name because he was also a god of law and oaths, art and craft, but at the same time, he practiced magic, trickery, foretelling, and supernatural phenomena. He also punishes oath-breakers with diseases, while his brother, god Perun, a ruling god of war, punishes by death in battle.

Veles has been always considered to be a complex mythological figure especially regarding his origin and the role he played in the ancient beliefs of the Slavs. Many different and contradicting features of this enigmatic deity, show his significance and meaning in the pantheon.

Veles is a very charismatic god but so is his brother and eternal opponent, Perun, the supreme god of the Slavic Pantheon as well. 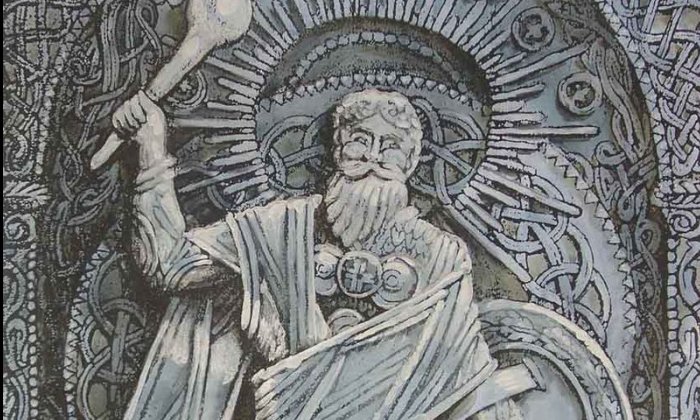 His other attribute of great importance is oak, which is widely regarded as the sacred Slavic tree - the focal point of the axis mundi - the axis of the world.

The Slavic oak represents the connection between Heaven and Earth like Yggdrasil in Norse mythology and Ceiba Tree of Maya.

The concept is universal and adopted by religions and cosmologies of many cultures around the world.

Perun and Veles are two of the most important gods in the Slavic pantheon. Perun represents the skies, and Veles represents earth.

These gods are so extremely different that they contradict each other and participate in a never-ending battle. Perun wields his ax from the skies and shoots powerful thunderbolts to the earth, where Veles lives usually in the form of a dragon/snake, and steals Perun’s possession.

One myth mentions Veles steals Jarilo, a son of Perun from the cradle, and brings him to the underworld. Veles raises him as his son. In the springtime, Jarilo returns from the land of the dead, (according to the Slavic beliefs is located beyond the sea) and brings spring from the ever-green underworld into the realm of the living.

The problem is that Jarilo, the god of fertility, vegetation, and spring must be stolen. If this event does not happen, no spring season arises on earth. The battle between Veles and Perun is hopeless because it can never end; these two gods can never meet; heaven and earth are meant to be apart forever and never touch each other.

This conflict will never cease.