AncientPages.com - The cross is best known as a Christian symbol but this ancient universal  symbol has its beginnings in the most remote times.

The earliest example of the cross comes from Crete and dates back to the fifteenth century BC. It was used by the Assyrians to represent their sky god Anu, by the Chinese as a symbol of the earth; others used it as a sun-symbol. 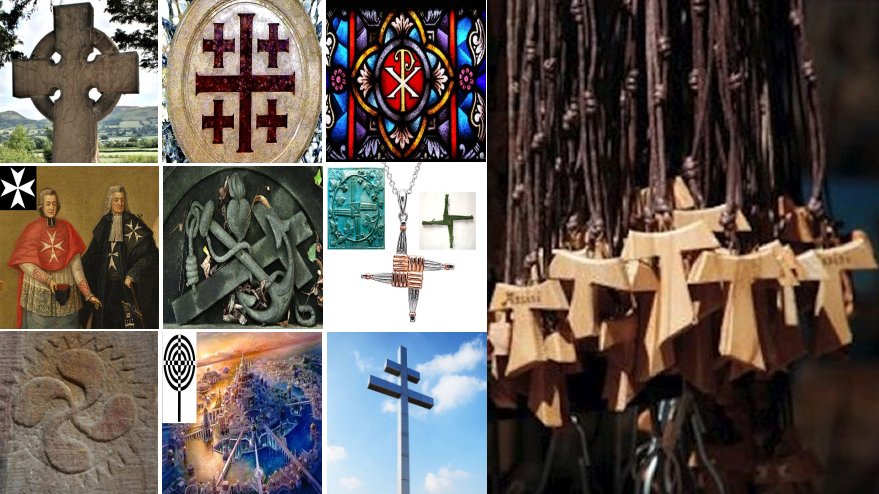 The common, worldwide meaning of the cross is protection but it has also other different interpretations and variations.

Let us look at some of crosses of great importance. 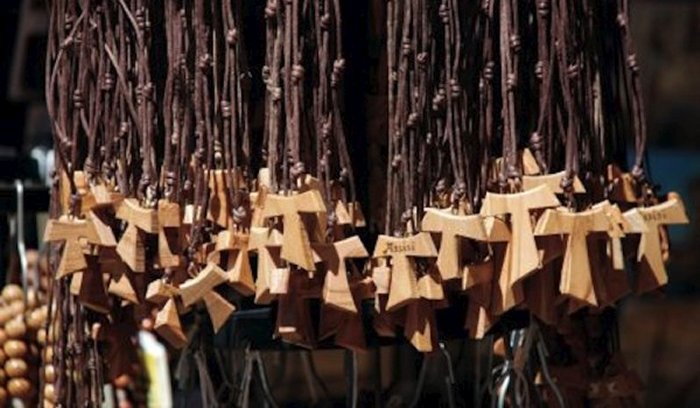 There are similarities between all these deities. They all died and were resurrected, and so carry analogies with the Sun that dies every night and is resurrected every morning. This cross was named after the Greek letter it resembles. The shape of the letter 'tau' or 'T' was interpreted as representing a crucifix from antiquity. The Tau Cross is most commonly used in reference to the Franciscan Order and Saint Francis of Assisi, who adopted it as his personal coat of arms after hearing Pope Innocent III talk about the Tau symbol.

The symbol represents resurrection, reincarnation, life, immortality, symbolic death, a gateway and and general well-being. It is now used as a symbol of the Franciscan Order. 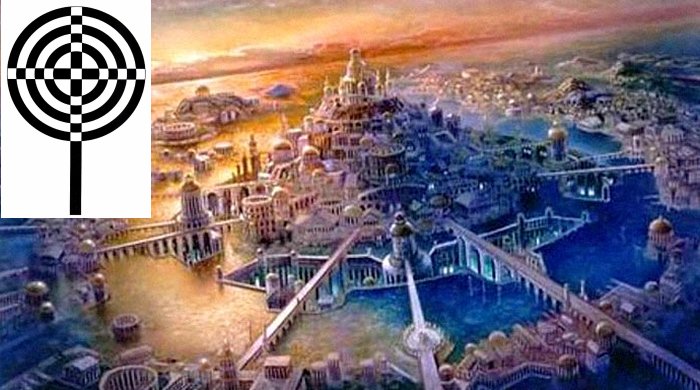 This cross symbol, intersected by three circles, is a sign of recognition among groups who believe that they are descended from inhabitants of the lost island of Atlantis. The cross symbolizes the legendary Atlantis, with its three circular walls around the island city. The axis of the cross represents the great access channel.

The crossed circle that forms a main feature of this symbol represents the four elements and the four directions. The cross’ design was mentioned by the Greek philosopher Plato who described of the layout of the streets of Basileia, the supposed Atlantean Capitol city, in Timaeus and Criteas.

It is a graph with strong emission power, mainly for material goods. It should be used oriented on the North-South axis (the linear part towards the South). 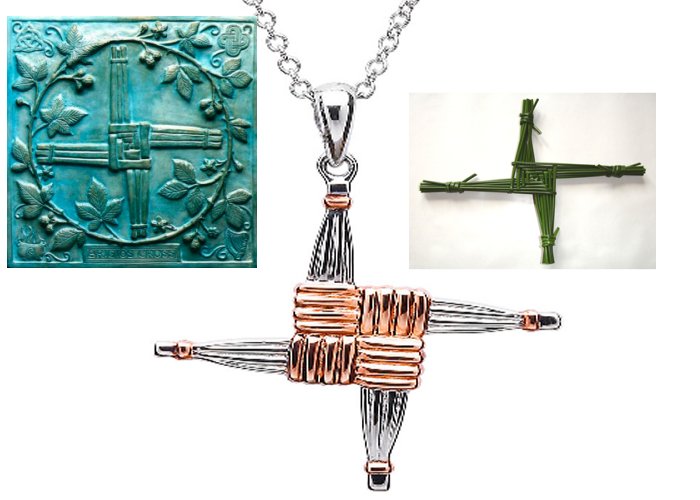 Brigid's cross predates Christianity and is believed to keep evil, fire and hunger from the homes in which it is displayed. The cross is associated with Brigid of Kildare, one of the patron saints of Ireland. The presence of the Brigid's cross in Ireland is likely far older than Christianity. The Goddess Brigid was one of the Tuatha Dé Danann. The symbol resembles the ancient sun-cross symbol, the swastika; its four arms point to the cardinal points of the compass. It is daid that the cross's  protruding arms with a woven square in the middle, has a pre-Christian origin. 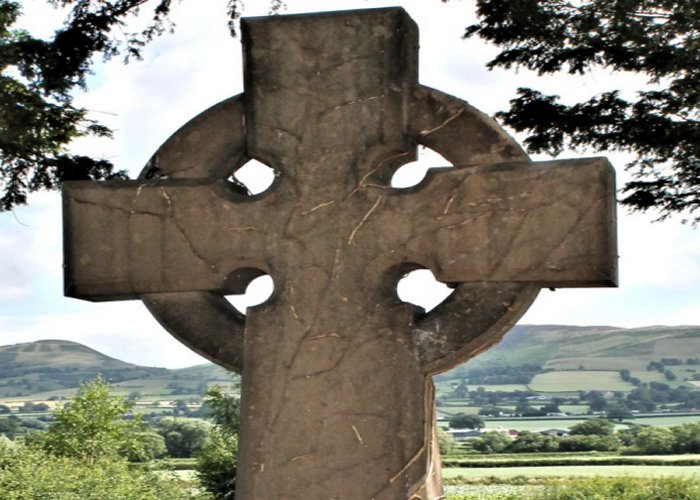 The Celtic cross is a symbol of both culture and faith. The true origins of the Celtic cross are unknown but there are many theories and legends. The cross predates Christianity. One Christian legend says that the first Celtic cross was formed by St Patrick while bringing Christianity to the Druids. The Druids used to worship a large circular stone. St Patrick, on seeing the significance of this stone, drew a large cross through the middle of it in order to bless it.

From this act, the two cultures combined to form the Celtic cross. The cross represents Christianity and the circle is the Celtic representation of eternity, no beginning and no end.

In early versions of this cross, found in Ireland, the arms of the cross are not protruding beyond the circle; instead the whole symbol is encompassed inside the circle, and as such it is known as the Sun Cross, the Wheel Cross, or Odin’s Cross. 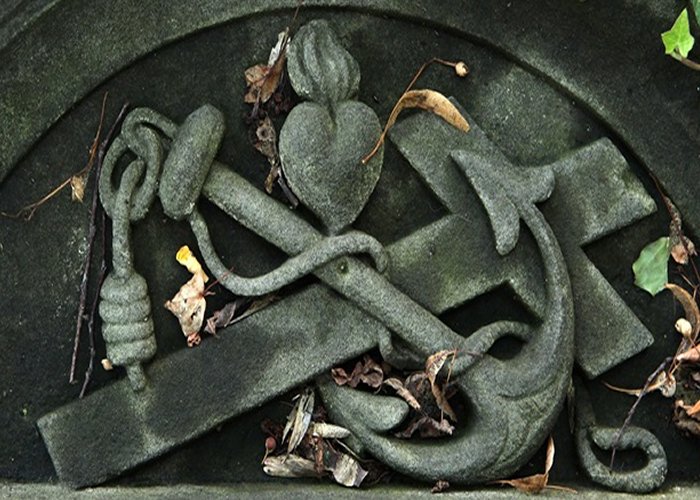 The meaning of ‘Crux Dissimulata’ is “disguised” (or “dissimilar”) cross. commonly found in the Christian catacombs. The symbol predates Christianity as a pagan symbol. It is the sacred symbol, which played an important role in times when early Christians were widely persecuted in the 3rd century Rome.

The cross symbol was disguised with the help of the anchor, which symbolizes stability. In this cross there is a symbolic picture of the crucifixion: the mystic Fish (Christ) on the suggested cross (the anchor).

This cross is also attributed to St. Nicholas of Myra, being the patron saint of seamen. 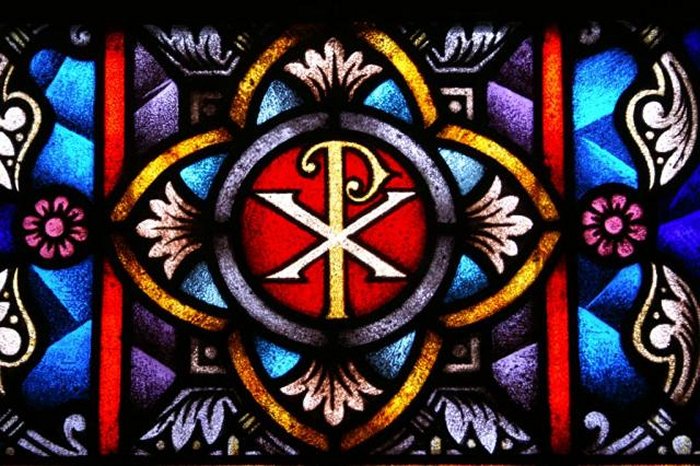 Labarum refers to a military standard used in the Roman Empire that was adapted by the Emperor Constantine I as a symbol of Christianity and he ordered his soldiers to place this symbol on their shields before a decisive battle.

It is said the Emperor Constantine saw this symbol in a dream. Constantine's subsequent victory was attributed to Christ's support for displaying the Labarum. Labarum symbol consisted of a flag suspended from the crossbar of a cross (symbol of the crucifixion of Christ).

A miniature version of the labarum was part of the imperial regalia of Byzantine rulers, often depicted carrying it in their right hands. 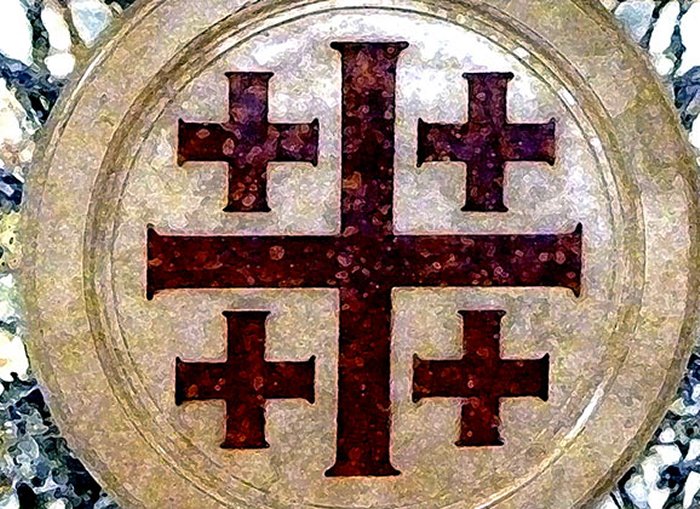 Also known as the Crusader cross, the Jerusalem cross dates back to the 11th and 12th century when the Crusaders captured Jerusalem in 1099 and established Christianity in the area. At that time, Muslim forces controlled the area. One of the leaders of the Crusades, Godfrey de Bouillon, used the Jerusalem Cross as a distinct symbol of the new Crusader state ('Latin Kingdom of Jerusalem'). De Bouillon believed that the cross symbolized Jesus Christ and the city of Jerusalem which is the root of Christianity.

Others believe that the five crosses together symbolize the five wounds Jesus suffered on the cross. The four small crosses represent the four wounds of Jesus’ hands and feet, while the large cross signifies Jesus’ pierced heart. 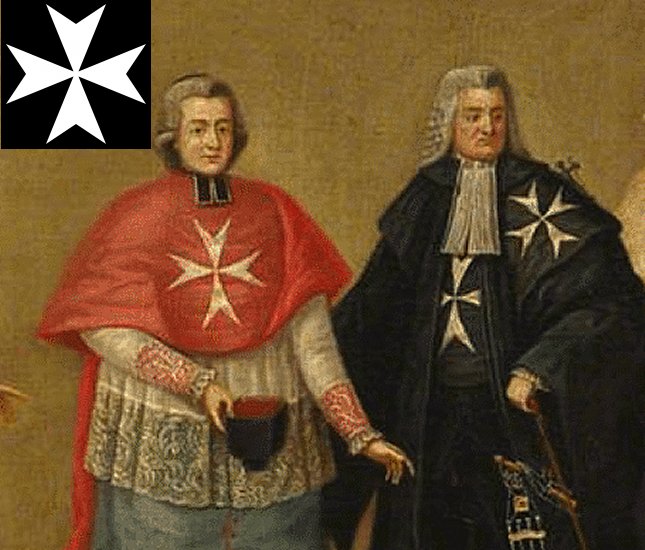 This cross has many names such as the Cross of St. John, the Maltese Cross, the Campaign Cross, the Iron Cross, the Regeneration Cross, or the Fishtail Cross.

Introduced to Malta by the Knights of St. John of Jerusalem upon taking possession of the islands in 1530, the Maltese Cross has become an intrinsic part of Malta’s culture and heritage. It is a symbol that is most commonly associated with the Knights of Malta (also known as the Knights Hospitallers of St. John), who ruled the Maltese islands between 1530 and 1798. The Maltese cross is today widely used and associated with Malta as a country (national airline, Air Malta and Euro coins. The Maltese cross remains the symbol of the Sovereign Military Order of Malta.

The cross's eight points denote the eight obligations of the knights, namely “to live in truth, have faith, repent one’s sins, give proof of humility, love justice, be merciful, be sincere and whole­hearted, and to endure persecution”. 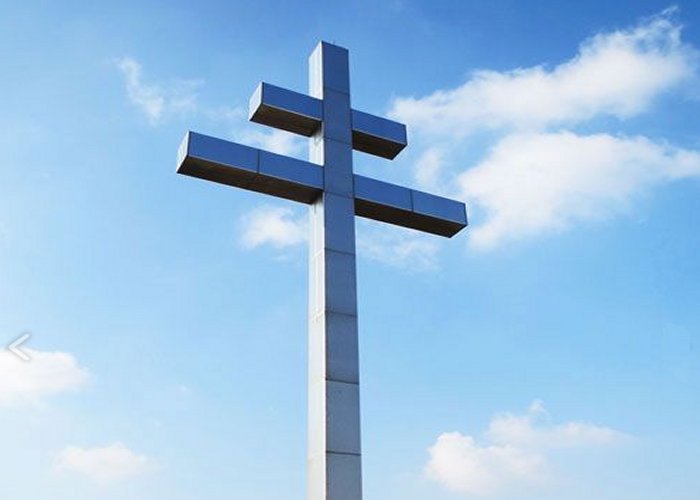 The origin of this cross dates back to the early days of Christianity. Symbolically, it represents the Cross on which Jesus was crucified. It is the Cross on which Pontius Pilate added a second and shorter crossbar inscribed with INRI - 'Iesvs Nazarenvs, Rex Ivdæorvm' - Jesus of Nazareth, King of the Jews.

The Patriarchs of Jerusalem - in other words the Bishops - granted the Knights Templar the use of the Cross during the Crusades. The Cross with two equal size crossbars was later added to the coat of arms of the archbishops in order to represent their function. At the same time, the Cross Lorraine is used to denote one of the degrees within Freemasonry.

During the Second World War it was adopted by the French Resistance as their secret symbol, an emblem to stand in opposition to the swastika, which had been rendered sinister by the Nazis, and lost for a time its meaning as a positive Sun symbol. 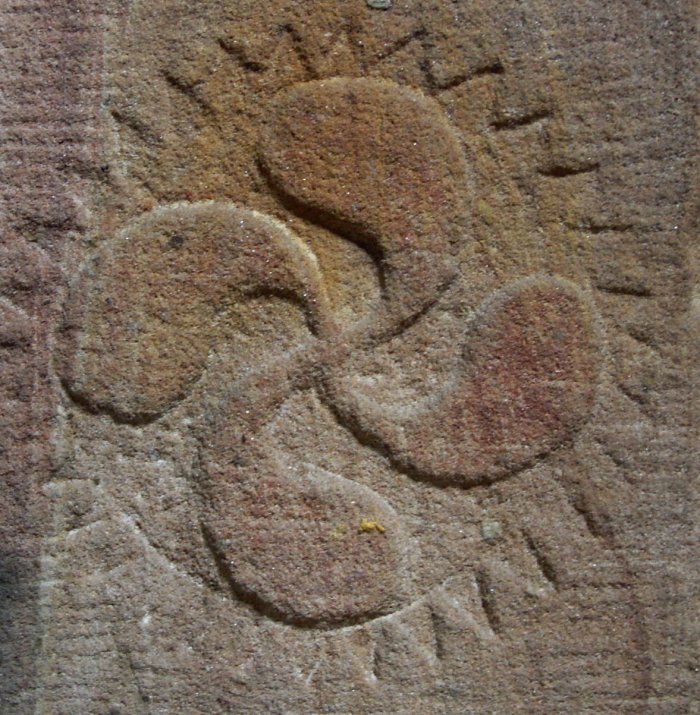 Lauburu is an ancient Basque symbol that is believed to represent the Basque identity, unity and culture. This cross is considered a symbol of prosperity, but it may have religious, cosmic, philosophical and naturalistic meanings. It is sometimes associated with the Christian Cross and symbolizes the eternal circle of life.

As a sign of mankind, the four heads of the Lauburu represent four human states: physical, mental, emotional and perceptual. It represents the four fundamental human elements – Form (or Density), Conscience Life (or Vitality) and Sensibility.

This symbol is often carved on tombstones.