AncientPages.com - On the evening of April 18, 1775, Dr. Joseph Warren instructed Paul Revere, a Boston silversmith, to ride to Lexington, Massachusetts, to warn Sam Adams and John Hancock that the British troops were coming to arrest them and to warn the countryside of the danger.

William Dawes was instructed to travel over the Boston Neck, and Paul Revere was to row across the Charles River in case one of them was captured. Revere successfully crossed the river and alarmed the countryside by stopping at each house on his way to Lexington.

Revere was hired by the Massachusetts government in 1774 as an express rider to carry messages and news to New York and Philadelphia. 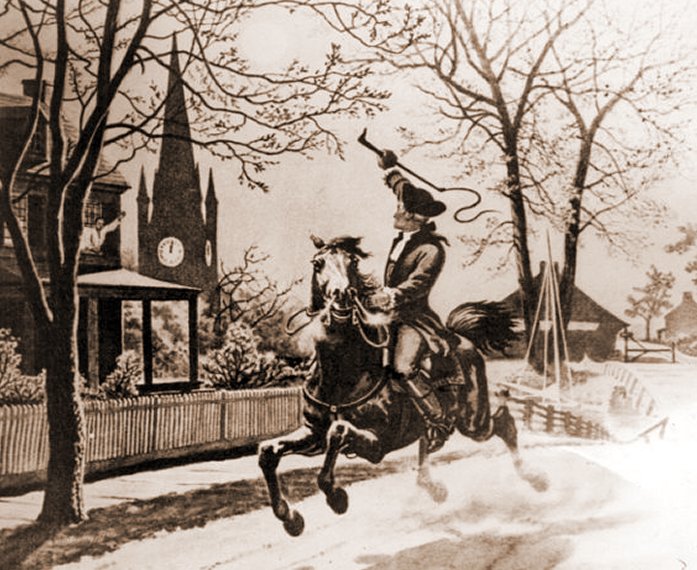 After saving Hancock and Adams from capture, Revere rode on to Concord with Dawes. Dr. Samuel Prescott, the third rider, would join them and all three were eventually captured by a British patrol. They were released shortly after.

He rowed across the Charles River, then borrowed a horse from Deacon John Larkin. While in Charlestown, he verified that the “Sons of Liberty” had seen his pre-arranged signals— two lanterns were hung in the bell tower of Christ Church in Boston, indicating that the troops would come by sea.

On the way to Lexington,  Paul stopped at each house to warn of the coming British, arriving in Lexington about midnight. When he reached the house where Hancock and Adams were staying, a sentry warned him not to make such noise.

“Noise!” exclaimed Revere, “You’ll have more noise than this before long. The regulars are coming out!”

After delivering his message, Revere and two other riders were arrested by the British. He was held for a short period of time, then released.

Paul Revere returned to Lexington in time to witness the battle on the Lexington Green. Longfellow's poem, published in 1861 in the Atlantic Monthly, made Paul Revere a national folk hero.