AncientPages.com - On March 24, 1401, Turco-Mongol emperor Timur, who in English became known as Tamburlaine,  sacked the ancient and civilized town of Syria - Damascus, the second city of the Mameluke Empire.

In the early months of 1401, after crushing Aleppo, Syria, Timur - the savage Turkic warlord,  a military genius, a tactician, and very cruel man - moved his army of horsemen through the highway to Damascus and on his way, he first took the cities of Hama, Homs, and Baalbek. Moreover, he sent orders to his horsemen to plunder Tyre and Sidon. 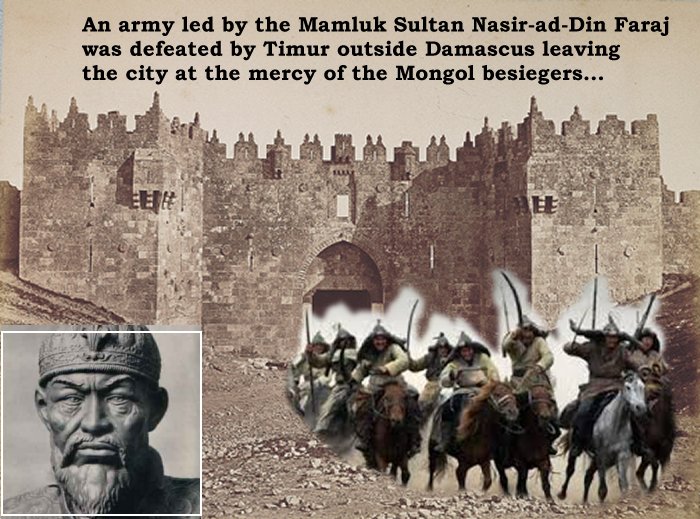 Everywhere he went, he waded deep in blood and brains,  destroying cities and massacring their populations, building triumphal towers of his victims' severed heads and carrying off survivors as slaves.

In 1398 he invaded India, crossing the Indus on a bridge of boats, reducing Delhi to rubble and taking away enormous quantities of the plunder on which his army's loyalty depended.

The governor held out with some forty men in the citadel of Damascus but surrendered after a month.

Many of the inhabitants were viciously tortured, bastinadoed, burned, or crushed in presses, and many were enslaved.

Children under five were left to starve when their mothers were carried off. One of those enslaved was the twelve-year-old Ahmad ibn Arabshah, who later wrote a biography of Timur. As was his habit, Timur had all the town's skilled craftsmen deported to Samarkand to beautify his capital.

Timur went on to take Baghdad by storm and then he continued his death campaign against China in 1404, but fell ill and died early in the following year.

Scholars estimate that his military campaigns caused the deaths of 17 million people, amounting toabout 5% of the world population.